The look on Donald Trump's face when he's been proven wrong

Image of the Week: Either the U.S. president succumbed to weeks of expert consensus on masks, or he had an attack of common sense. Which is more likely? 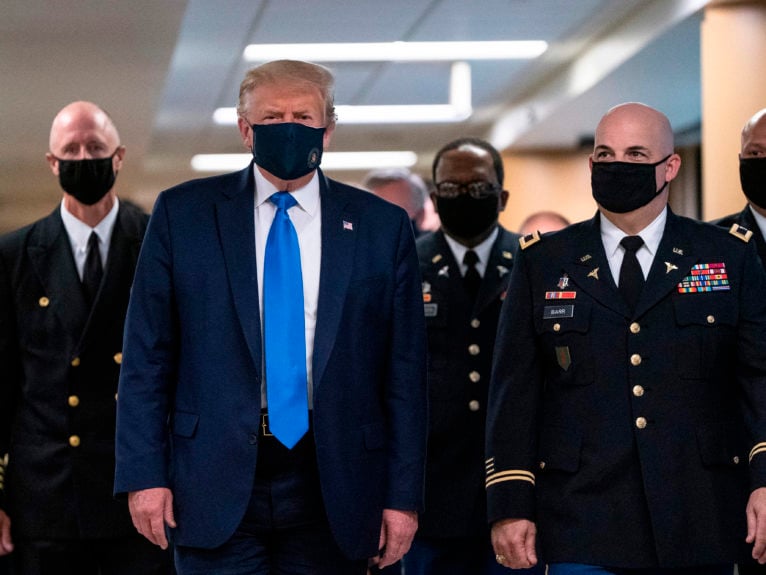 On a July 11 tour of the Walter Reed military hospital outside Washington, exactly 99 days after the Centers for Disease Control and Prevention recommend everyone wear masks in public, U.S. President Donald Trump finally decided to agree. It may not be the first time this year he’s actually worn a mask⁠—he claimed, almost flippantly, to have worn one at a factory in Arizona a couple of months back, but apparently took it off before the press could photograph him in it. But this is the first time he is flaunting it, embracing the look, flanked by military men all wearing similar face-covering fashions. He told Fox he “sort of liked” how he looked in it, comparing himself to the Lone Ranger. Leaving the White House for the hospital, he reassured everyone that he’s “never been against masks, but I do believe they have a time and a place.” This might be as close as we’ll get to Trump acquiescing to health officials on anything during this pandemic. Emblazoned with the presidential seal, his broad black mask carries more symbolism than it should, its debut occurring the same day that the U.S. recorded 66,528 new cases of COVID-19, a new daily record. Arizona has more cases per-capita than literally any other state or country in the world, while Florida, Texas and California’s numbers continue to skyrocket as well. As different states flatten their curves at varying levels, one can’t help but think that thousands of deaths, not to mention a whiplash news cycle and a flurry of political backpedalling, could have been prevented by leaders who simply listened to health officials from the start.