The meaning of Melania, on the U.S. right's first night

A Melania Trump speech capped a night that spoke volumes about U.S. politics' relationship to reality 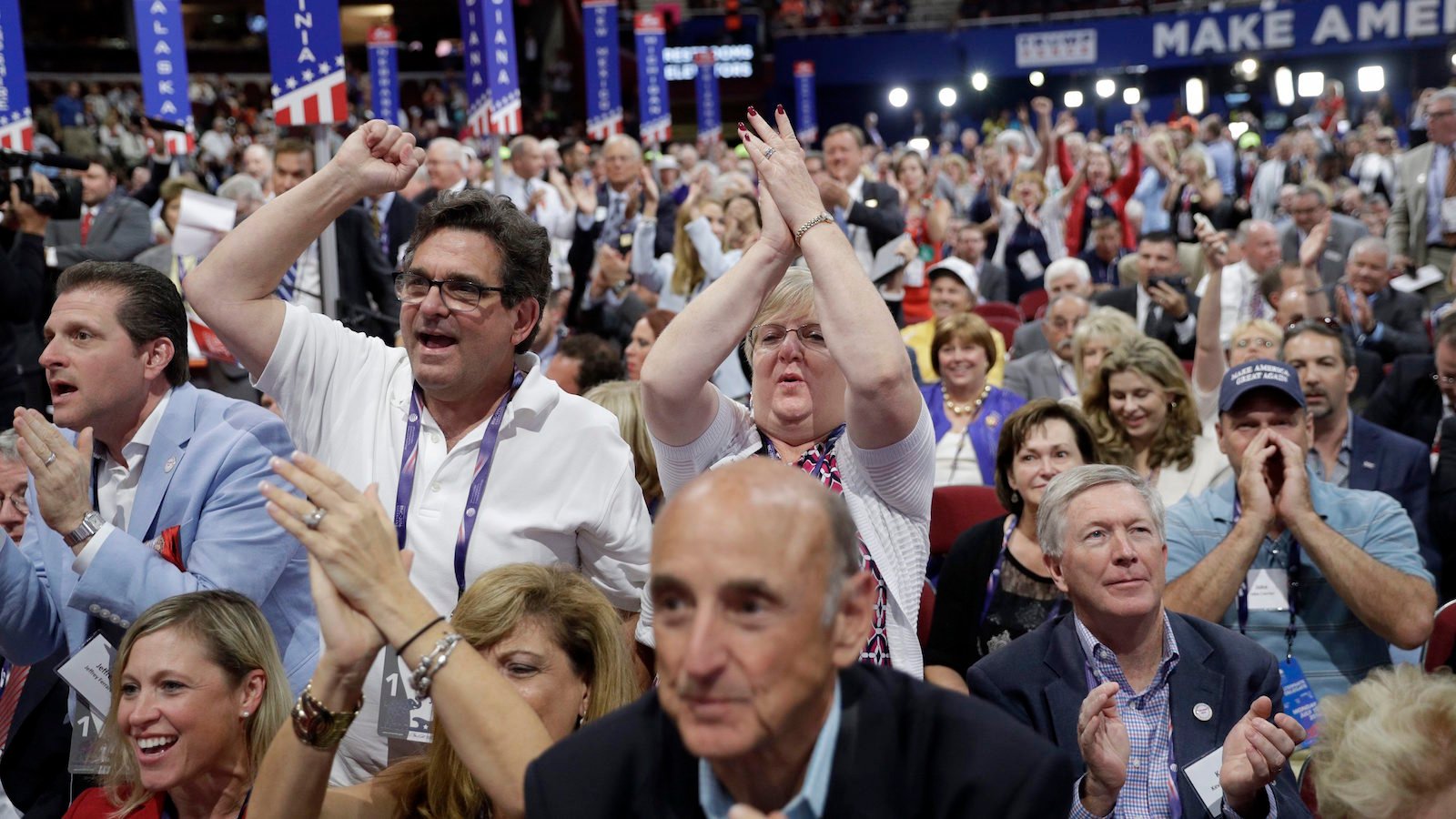 Delegates react as some call for a roll call vote on the adoption of the rules during first day of the Republican National Convention in Cleveland, Monday, July 18, 2016. (AP Photo/John Locher)

The idea that Donald Trump is actually going to become the nominee of a major U.S. political party is still hard to believe, not just for all the reasons that have been rehearsed elsewhere, but simply because there’s always been an air of unreality around his campaign. A large part of the way he won was by promising things that can’t happen and that no one really expects to happen, like making Mexico pay for a border wall. The skilful Trump-sympathetic reporter Byron York has argued that Trump sees outrageous promises as a negotiating tactic: “Perhaps deporting all illegal immigrants is the political version of asking for about three times more than you want.” Whether that’s true or not, Trump has discovered that you can win the Republican nomination—and maybe even the presidency—by making the best offer, whether or not anyone truly believes in it. Of course, “but he probably doesn’t really believe it” is a lousy argument to make in someone’s defence; a lot of damage has been done by people who didn’t think anything bad would actually happen. Still, it would at least explain why Trump seems to rely a lot on the underpants gnomes theory, whereby you never have to explain how to bring something about; for his supporters and even some putative opponents, it’s enough that he brings such ideas into the open and shifts the Overton Window.

MORE: Amid discord and din, the Republican convention begins

That sense of unreality still hangs over the Republican convention in Cleveland. One of the themes Trump is trying to incorporate is “law and order.” One of the star speakers tonight was a sheriff who went on CNN to attack the Black Lives Matter movement; statements in support of cops were among the biggest applause lines of the night. But there aren’t a lot of specific policies being pushed in regard to this, in part because the crime rate in the U.S. is still quite low, unlike in 1968, when it had more specific urgency. An anonymous Trump insider told York that the idea of law and order is “more of a mindset than anything else.” It’s about holding up an ideal way to think and speak, which explains why President Obama was often singled out for criticism for the way he talks or his perceived refusal to call America’s enemies by their true names.

What that means for the Republican convention is that the speakers don’t have to worry about whether they are proposing policies that can be carried out. Instead, the point is to paint a picture of an ideal world, and hope that more people consider that ideal better than the world we’re currently living in. Of course, all conventions are partly about raising hopes that will later be crushed. But normally, if a candidate is advocating certain specific policies, at least some of the speakers will mention them. The policies Trump have advocated for didn’t come up much, at least so far; instead, the speakers tended to talk about general principles, or the America they would like to see, and sort of yada-yada over how he proposes to make that happen. 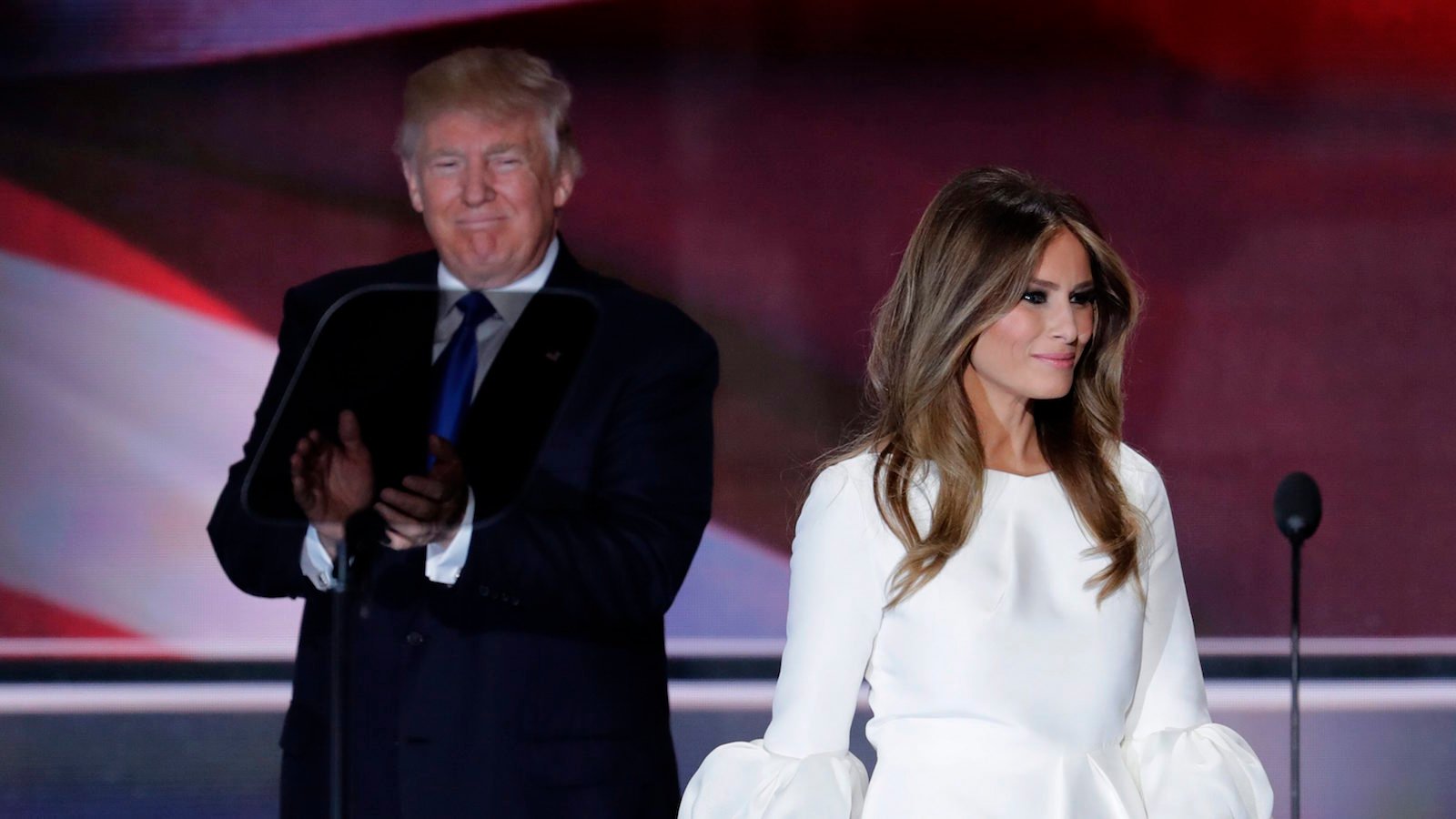 All of this may have put more weight on Melania Trump’s speech than is usual for a speech by a prospective first lady. Since she doesn’t have to explain how he will achieve the great new America he’s talking about, her job was to convince Americans that her husband is the wonderful winner he keeps claiming to be. Her speech was short, and so generic and free of personal relevance that at least one paragraph of it may have been partly copied from Michelle Obama’s 2008 speech.

In keeping with the non-specific nature of the speech, it was deliberately non-specific about what Trump wants to do (“Donald gets things done. Our country is underperforming and needs new leadership … Donald wants us to move forward in the most positive of ways”). But since the Trump campaign is famously intertwined with the world of reality TV and show business—something Trump emphasized with his deliberately over-the-top entrance—her job was to play a sympathetic character and convince people, by extension, that her husband is a sympathetic character too. Plus, she allowed Trump crony and near-vice-presidential-pick Newt Gingrich to make the argument that Trump can’t possibly be anti-immigrant because he’s married to one.

There was also, obviously, a subtext about showing that Trump is a great man because of his taste in wives. Trump, never one to be subtle, has already made an unfavourable comparison between Melania and Heidi Cruz, the wife of one of the many career politicians he rolled over in the primaries. He’s backed off a little on openly showing her off, but since the campaign is famously intertwined with the world of reality TV and show business, her appearance and relative youth were clearly meant to be an implied sign of Trump’s success.

She was, in short, being presented as the perfect wife at a convention where one of the enemies, Hillary Clinton, was briefly mocked for wearing pantsuits, and where a Democratic victory would turn a former president into the first “first husband.” Since one of the favourite themes of some of Trump’s supporters was that he was fighting back against an unmanly and emasculated Republican establishment, the fact that his third wife is Melania Trump may signal that he’s a man they can trust and admire.

Will that actually convince any undecided voters—there still are a few left, though there are fewer every year—to vote for Trump? If there’s one thing his campaign has proven, it’s that normal standards don’t apply, and that predictions based on normal standards are futile. Still, those normal standards are all we have, and they suggest that the answer would be no. The evening gave undecideds almost no reasons why they should support Trump, no promises of how their lives would get better or safer if he got elected. It couldn’t, really, because most of his specific policy proposals are unpopular with swing voters, and the best bet at the moment is to play them down or pretend they don’t exist. Even Rudy Giuliani’s speech, the biggest and angriest of the night, mentioned few specific things Trump will actually do, except get rid of the Obama administration’s deal with Iran; for the most part he claimed that Trump would make America better by being willing to “define our enemy,” and glossed over things like his own past positions on immigration. Perhaps as the week goes on, Trump or someone will try to unveil some specific benefit that will be provided to these voters; for now, the message is simply about asking people to picture an ideal world. That seems to appeal more to people who already have that world in mind, and don’t much care how it is to be brought about, as long as someone is out there talking about it.

But again, no one really knows what will bring Trump down. Hillary Clinton, while she still seems more likely to win, has a particular problem against candidates who offer voters the moon. I don’t think Bernie Sanders is equivalent to Donald Trump at all, but one advantage Sanders had over Clinton in the primaries is that he felt able to propose ideal solutions that will never happen in the U.S. (though, unlike some of the things Trump is talking about, they could happen), while she prefers to focus on things she considers realistically possible. Now she’s going up against someone who promises to make everything better simply by the magnetic force of his personality. If she can focus on arguing that Trump would make America a worse place, she will probably win. But it’s easy for the realistic candidate to be portrayed as a killjoy for bringing reality into the discussion.