The morning after Donald Trump loses

Donald Trump has lost, writes Scott Gilmore. So let's worry about what comes the morning after. 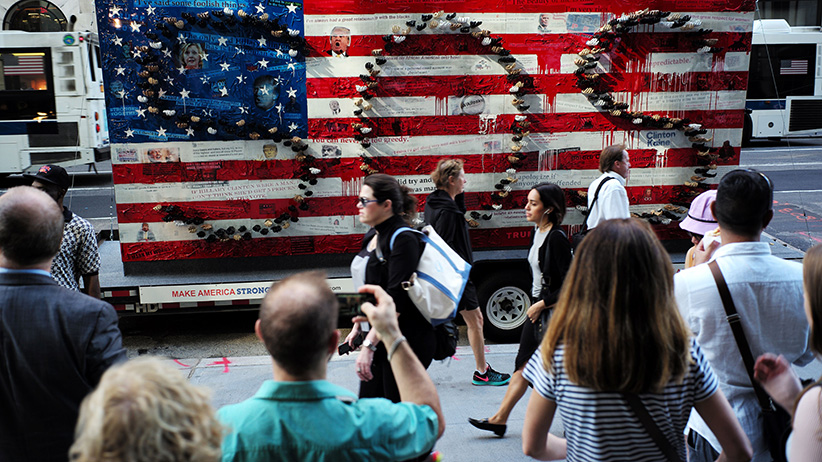 The presidential election is over. It’s now time to start worrying about the day after.

Without some cataclysmic surprise, Donald Trump has lost. His poll numbers are so low he is within groping distance of the worst showing by a mainstream candidate since 1936 when hapless Alf Landon only managed 36.5 per cent of the vote against Franklin Roosevelt.

But don’t take my word for it: Republican strategists themselves are telling the press defeat is now inevitable. And the Irish bookie Paddy Power has called a Clinton victory and is already paying out bets.

So, set your apocalyptic fears aside. Donald Trump will not be spray-painting the Oval Office a classy gold. Rush Limbaugh will not be appointed “Friendship Ambassador” to the Kremlin. Instead, you need to start channelling that anxiety toward what happens next. In his political death throes, Donald Trump is damaging the republic almost as much as he would have in office.

There is no precedent for what Trump is doing right now. Faced with the inevitability of joining the humiliating ranks of the “losers,” Trump is trying to fabricate excuses by discrediting American democracy itself.

In the last week he has accused the press of colluding with the Clinton campaign—his explanation for the fact that not a single newspaper with circulation over 50,000 (i.e. smaller than the Ajax-Pickering News Advertiser) has endorsed him. He claimed the Republican Party itself is undermining his campaign. And, worst of all, he told anyone still listening that the election itself is rigged.

Trump’s accusations of electoral fraud began as merely a throwaway line in his stump speech. But as his campaign continued to descend, his allegations became more categorical. This week Trump specifically accused voters in the “inner cities” (his euphemism for African Americans) of already stuffing ballots.

No mainstream politician in more than 100 years has claimed the U.S. electoral system is fraudulent. Even in the depths of the “hanging chad” debacle in 2000, Al Gore accepted the process as free and fair. But Trump is not just running against Clinton, he is running against America. His campaign rhetoric is about tearing down Washington, the political system and the establishment, and rebuilding it in the image of “stronger” and “greater” nations, like Vladimir Putin’s Russia. The implicit message of “Make America Great Again” is that America in its current form is a mess, and Trump needs to knock it down before he can build it back up.

Related: Whatever happens on Nov. 9, America must grapple with Trump’s legacy

His followers agree. In interview after interview, Trump supporters claim that dead people will be voting in the millions or that stealth electronic trickery will delete Republican votes. According to a Gallup poll this week, 73 per cent of Republicans think the election could be stolen from him.

For the record, there is absolutely no threat of this happening. Voter fraud in U.S. elections has been shown again and again, by government inquiries, academic studies and legal investigations, to be virtually non-existent. Justin Levitt, a professor at the Loyola Law School, found that between 2000 and 2014, there were only 31 documented cases of voters attempting to use false ID to vote. Consider that more than one billion votes were cast during that period. Furthermore, the majority of Americans will go to the polls in the 60 per cent of states led by a Republican governor, the official who oversees the actual voting process. This means that if Trump’s allegations of vote-rigging were true, his own party would have to be in on it.

And so, come Election Day, it is probable that Trump won’t even offer a concession speech. He will claim the White House was stolen from him, and that Clinton is not a valid president. This will be Trump’s new birther movement, and it will be far more poisonous than the first. The resulting chaos and hostility will be devastating.

Even before this election, the bitter partisanship in Washington had created the most polarized Congress in history, incapable of passing even the innocuous bills, necessary to keep government running. Thanks to Trump’s rhetoric, the Republican base will emerge from the election enraged and feeling victimized. No accommodation will be allowed, and deadlock will be certain. John McCain is already claiming the Republicans will block all of Clinton’s Supreme Court nominees, regardless of her electoral mandate.

The talk-radio airwaves will be filled with new conspiracy theories. New demagogues will emerge to ape Trump’s shameless lying. Republican officials, like the infamous Sheriff Joe Arpaio, will feel free to disregard federal agencies. Any hope of American returning to an era of genuine bipartisan accommodation will be lost for years and years.

This will be Trump’s legacy: a crippled political system that will take a generation to fix. And that’s something worth fearing.