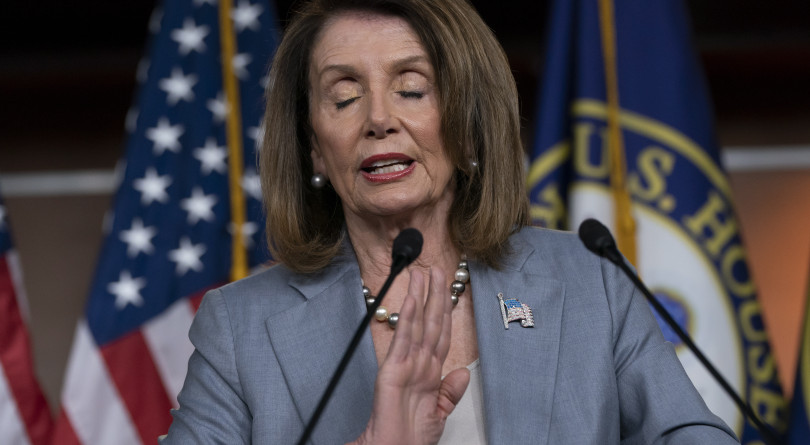 The USMCA won't come to a vote in the House until Nancy Pelosi is good and ready. And right now, she's not. (J. Scott Applewhite/AP)

It’s now or never for NAFTA 2.0—with the likelihood of “never” increasing by the hour—according to the chairman of the Congressional subcommittee where Donald Trump and Justin Trudeau’s fetal, possibly futile United States Mexico Canada Agreement lies gasping in its croup tent—de-oxygenated by impeachment, contempt, infrastructure, Iran, immigration, prescription-drug prices, pre-existing medical conditions, and the duplicitous, backsliding Chinese.

“If it bleeds into next year, it’s dead,” the committee’s chairman gloomily was forecasting earlier this week. Such was the assessment of Rep. Earl Blumenauer, a 12-term Democrat from the Rose City of Portland, Ore., where many voters, like the scented blossoms, are pink. As the chairman of the House of Representatives’ Subcommittee on Trade, Mr. Blumenauer is prepared to pound his gavel whenever Speaker Nancy Pelosi decides to place the new agreement on the agenda, which could be this month, or next year, or whenever she feels like flipping a bone to the president while confronting the farthest-left fringe of her caucus, to whom NAFTA stands for Never Approve F—ing Trump’s Agenda.

At her weekly press briefing on Thursday, Speaker Pelosi enumerated drug prices, maternal mortality and disaster assistance among her most urgent priorities, in addition to her tantalizingly slow walking of Trump’s impeachment, pretending that “it has nothing to do with politics—it has to do with e pluribus unum,” and reminding reporters that “the Nixon experience was months before even the Republicans had to go to the president and say, ‘It’s over.’ ” So New NAFTA is not exactly at the zenith of her to-do list.

RELATED: A new poll on the USMCA suggests Canadians are feeling deal-makers’ remorse

Rep. Blumenauer, who already has signed on as a supporter of Articles of Impeachment against the president, continued to hope for some sort of movement by the end of June. “Getting into the summer will be problematic,” he shrugged, “and I think that if it leads off into 2020 then it leads into the next Congress and the next administration”—and he noted his frustration in trying to alibi the hold-up to the other governments enmeshed in the tripartite pact.

“Talking to the Canadians, I have no good answers,” Blumenauer told an audience at the Center for Strategic and International Studies on Wednesday. “I’m really just apologizing to them. It’s really puzzling.”

Equally perplexed this week was Liberal MP Mark Eyking, chairman of the House of Commons Standing Committee on International Trade, who was visiting the U.S. capital in hopes of convincing legislators from both parties that USMCA is worthy of their urgent attention.

“Washington is quite focused on the Mueller case and the Chinese coming to town,” Chairman Eyking told Maclean’s during his sojourn. “The sad part is that most of these congresspeople are not thinking of our deal at all, or else they are saying, ‘Oh, it’ll get approved whenever we get around to it.’ When we go into their offices, they say ‘There’s no problem.’ Well, there are a couple of problems—we have our election cycle, which they know nothing about, and we have the extradition situation with Huawei and they’re not knowledgeable about that either.

“A couple of congresspeople were quite surprised when I told them about it. We are taking one for them on this one and we’re getting punished for it by the Chinese. So a lot of what I am doing here is educating them on a couple of things. One is our election cycle and two is that we’re in kind of a situation with the Chinese.”

House Democrats, of course, are in their own kind of a situation with Donald J. Trump, whom party leader Hakeem Jeffries this week called “a wannabe dictator with authoritarian tendencies.” With the partisan battles over Special Counsel Robert Mueller’s inquiry heading for years of litigation, with Democrats half-joking about locking up Attorney General William Barr in the Capitol’s dank and iron-barred Crypt, with even The Donald Jr. under subpoena—by his father’s own party!—over in the Senate, and with the 2020 presidential campaign already in full flower 18 months before Election Day, serious-minded solons such as Earl Blumenauer are reduced to dealing with what he labelled “the few members of Congress who are not running for president.”

A sampling of members by a Maclean’s reporter in the Capitol found no one who was ready to vote in favour of USMCA in the near term.

“One of the most important things is that we have strong enforcement, and strong labour and environmental protections,” said Rep. Suzan DelBene, Democrat of Washington State.  “I think right now we need to have a much more detailed conversation between the trade ambassador and members of Congress. There are lot of questions that he needs to answer.”

Getting Trump’s trade czar—Robert Lighthizer—to testify before the Subcommittee on Trade is one of Chairman Blumenauer’s priorities, he said, noting that his previous discussions with Lighthizer have consisted of “lots of warm and fuzzy, but specifics were not something that we had a chance to get to.” Still, Rep. Blumenauer said, “We’re not going to be rushed. I’m looking forward this year to taking our time and getting it right. There’s no advantage for us to rush this thing through.”

“Are the objections to the substance of the deal, or to the fact that it is Donald Trump’s deal, Rep. Ann Kuster, Democrat of New Hampshire was asked.

“I don’t think they’re focused on it being this president’s deal,” she replied, “although I would say it’s hard to get him to stay in one place and I think he is not a trustworthy negotiator, given the record that we have of trying to get to a bipartisan agreement on other legislation, only to have it blown up by a tweet at the 11th hour.

“But the concerns that I have are with our brothers and sisters in the labour community, our constituents who are environmentally concerned about saving our planet—I think it’s more the details at this point.”

In a Cinco de Mayo speech (delivered on tres del Mayo) to guests at a White House reception, Mexican Ambassador Martha Bárcena soothed, “Don’t have any doubt we will enforce these labor reforms … these should allay all the fears of our Democrat friends in Congress.” Ratification of the USMCA would be good for all three nations, the diplomat asserted, because “the livelihood of five million Americans is on the line.”

But even if Blumenauer’s subcommittee and Pelosi’s full House pass USMCA, the bill still faces a perilous future in the Republican-controlled Senate, thanks to Mr. Trump’s imposition of 25 per cent tariffs on imports of Canadian aluminum and steel. Locomoting at breakneck speed through the Capitol corridors on Wednesday, 85-year-old Chuck Grassley, Republican of Iowa, growled to a breathless Maclean’s correspondent, “Got to take the tariffs off and leave them off or I don’t think it’s going to be brought up anywhere.”

This was a reiteration of Sen. Grassley’s recent admonition to the president to “Quit thinking like a New Yorker” in a Wall Street Journal article headlined “Trump’s Tariffs End or His Trade Deal Dies.”

The bigger problem, said Earl Blumenauer, is to try to get Donald Trump to start thinking at all—about the real-world consequences of a foreign policy that, the Oregonian said, “is a manifestation of one person’s personality.”

Citing the “crazy uncle theory” to explain the president’s behaviour, Blumenauer said that “I’ve seen him change positions even within the same televised meeting,” but he allayed fears that the president might cancel the existing NAFTA treaty if the new one gets eight-balled as “a step too far, even for him.”

Mark Eyking picked a calamitous week to try to sell NAFTA 2.0—even to Republicans.

“When they talk about Trump, they kind of roll their eyes and say, ‘You know, he’s really popular with our constituents,’ ” the Cape Bretoner sighed. “We talked to one congressperson who said the voters were 70 per cent for Trump in his riding. But if Trump goes down that path of ripping up NAFTA, then I think he’s going over the line.

“The steel and aluminum tariffs, they’re not really having a big effect. These congresspeople, they say, ‘We can’t control Trump, we just have to live with it,’ but if he goes down that path there’s going to a real pushback. He’s going to have a lot of problems with Republicans.”

Meanwhile, Canada waits for Nancy Pelosi, and Nancy Pelosi has all the time in the world.

“It’s up to her to get this on the agenda,” said MP Eyking. “There has to be a win for the Democrats, too, but they can’t be seen as giving Trump something.

“It’s all doable, but the timing’s wrong for USMCA right now. The sad part is, the Republicans, they don’t talk to Trump either. It’s like they’re not even paying attention.”