The poetry of Donald Trump, vol. 1

There can be a kind of poetic timbre and flow to Donald Trump's word-jumble ramblings, finds Scott Feschuk 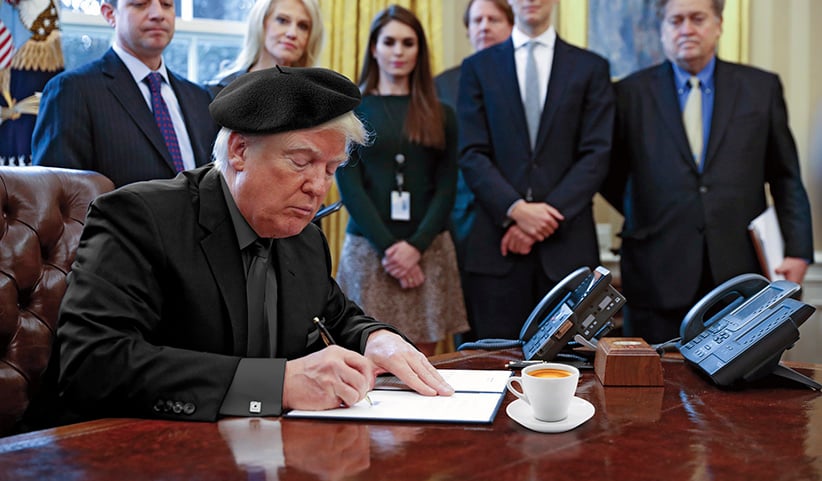 Apart from the titles, these are the words of Donald Trump—taken directly from the transcript of his sit-down interview Wednesday with ABC News’ David Muir. You can read the last volumes of Trump poetry here.

Mr. Pompeo was just approved
Affirmed by the Senate

He’s gonna be the head of the CIA

Who was not fabulous at all

Have I spoken to people at the top levels
and people that have seen it work?
I haven’t seen it work
But I think it works

Our roads,
our bridges,
our schools.

I Don’t Actually Know If There Was Voter Fraud, or How Much Voter Fraud There Was, But Somehow—Somehow—I Apparently Do Know This

Of those votes cast,
none of ’em come to me

None of ’em come to me

I spoke to the crowd
I got a standing ovation

and they said it was equal

They gave me a standing ovation
For a long period of time.
They never even sat down,
most of them

You have a lot of stuff going on
possibly

We’re gonna get to the bottom of it.

Actually, No, You Brought It Up When You Obsessed Over It for the Entire First Full Day of Your Presidency

You just brought it up
I didn’t bring it up

I didn’t want to talk about the inauguration speech

Maybe it’s okay if somebody else is president

Can’t be a great city

On Problems, and Having Them

Our country has a lot of problems
Believe me

I know what the problems are even better than you do

The President Explains the Trump Doctrine to a Man Named David

Honestly, Based on All Evidence to Date, I’m Not Sure We Can Admit That