The posterboys of American authoritarianism

Marie-Danielle Smith: Look at the faces in the mob, those merch-wearing zealots, attacking the U.S. Capitol as if rushing the stage at a rock concert 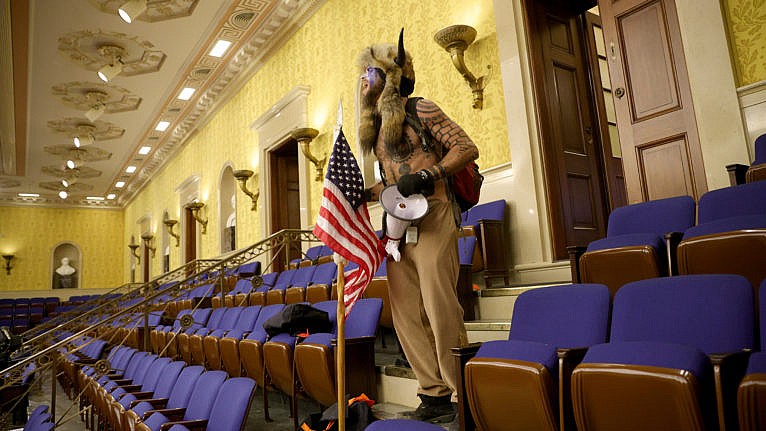 A Trump supporter yells inside the Senate Chamber on Jan. 06, 2021 in Washington, DC (Win McNamee/Getty Images)

Anarchy was a man wearing face paint and a fur headdress with black buffalo horns. A tattooed chest-thumper with an American flag in one hand and a loudspeaker in the other, bellowing “freedom” to an empty Senate chamber.

Treachery was a gleeful tourist in a Trump tuque waving at a photographer with a stolen podium under one arm, waltzing through the symbolic heart of his country’s democracy with a cavalier grin and a bulky souvenir.

Contempt was an intruder’s boot on the desk of the Speaker of the U.S. House of Representatives. And block letters scrawled on a folder in red pen: “WE WILL NOT BACK DOWN.”

We will remember the day that rioters stormed the U.S. Capitol for so many reasons. Because of how the mob’s actions damaged America’s image. Because of their attempt to disrupt a peaceful transition of power, a capstone at the end of a chaotic era. Because that attempt failed. And because a woman died in that chaos.

But as serious a domestic assault as this was, we may remember its absurdities most of all.

In what felt like a continuation of the year 2020, during which we were continuously sucker-punched by the unexpected, the scenes that unfolded were almost too bizarre to believe. Was it really happening?

We saw a crowd supposedly rapt in collective delusion, apparently convinced of their righteousness. They had anointed themselves with a duty to make an unprecedented attack on Congress, to avenge a hero they believed had been cheated out of power. A hero who, by the way, suggested well after the barricades were breached that they all go home—even while affirming their cause and calling them “very special.”

Here the president’s supporters were, at what they believed was their hour of reckoning. Their moment to “take America back” and “stop the steal.”

And here were the front-liners: A shirtless, wannabe Viking with red and blue smeared on his cheeks. A guy in jeans man-spreading on Pelosi’s chair with his iPhone on the desk. A maskless dude posing for a photographer with stolen property. These were the posterboys of an American constituency ready to embrace authoritarianism.

On live television we watched lineups of people wearing Trump sweatshirts and red ball caps taking selfies on Capitol balconies as if they were visiting an amusement park. Allowing themselves to be filmed, fully identifiable, as they smashed batons into the windows of one of the nation’s most important buildings. Waving Confederate flags in the Senate lobby as if a civil war hadn’t been fought to prevent such a thing. Scrambling in their sneakers to scale the stone walls of a building already emptied of VIPs.

And all of this in what looked like an alternate universe. There were few signs of the raging pandemic now claiming thousands of American lives every day. As if rushing the stage at a rock concert, the thousands of merch-wearing zealots packed against each other in a sweaty mass, Trump flags aloft, and engaged in a cross-fire of mostly-mask-free hollering that betrayed no fear of strangers’ droplets.

Whatever you want to call it—the affront to democracy, the weird vandalism festival, the likely superspreader event—the spectacle only lasted for a few hours. The Capitol was finally secured. The dystopian clouds of gas dissipated from the building’s hallways. By evening legislators were back at work. As if the whole thing had been a fever dream.

Later, we will know where Wednesday’s events fit in on the arc of history. We will reckon with how law enforcement responded and didn’t. We will find out, beyond the scraggly red script in Nancy Pelosi’s office, how the mob of Trump acolytes made their mark. What we will not do, despite ourselves, is forget that one of them was wearing horns.