The presidential masquerade of Donald Trump's State of the Union speech

Allen Abel: Trump strove to spin his 12-month whirlwind of lies, libel, and lunacy into a schoolboy’s field trip 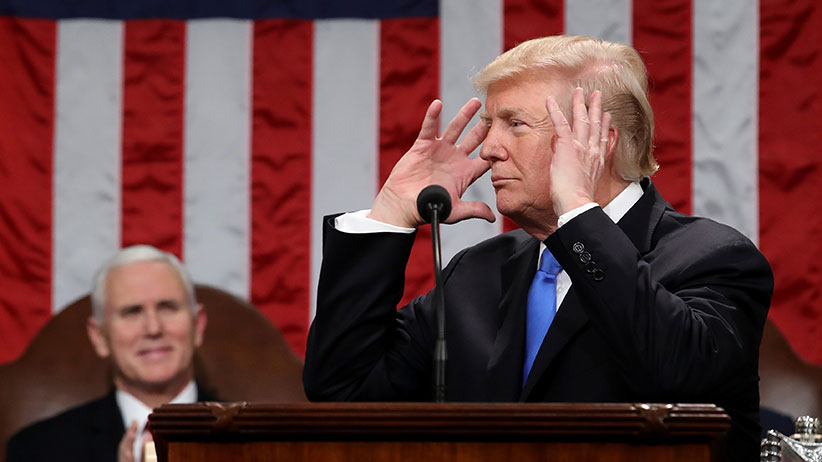 Donald Trump the Unifier, Donald Trump the Humanitarian, Donald Trump the Big-Hearted and Donald Trump the Learner—the four unlikeliest horsemen of the new American apocalypse—galloped to the U.S. Capitol Tuesday night to illuminate the state of a spasming union, vowing with a straight face, a soft voice, and plaster hair to provide “a SAFE, STRONG, and PROUD America” to citizens “of every background, color, and creed.”

Reading from a list of economic and military accomplishments, the (self-described) “stable genius” and (soi-disant) “least-racist person” proclaimed “our new American moment,” addressing a joint session of the same senators and representatives who, when the legislature needs to keep the government functioning or subsidize medical insurance for indigent children, cannot agree on anything except party-line filibustering and naming post offices for dead mayors.

In an hour-long speech, Trump declared victory over unemployment, high corporate and personal taxes, and the nearly extinct Islamic caliphate. He asked Congress for $1.5-trillion for infrastructure improvements, declared that “the era of economic surrender is over,” massaged Democrats with a call for paid family leave, and outlined a compassionate albeit deficit-ballooning agenda for his second 365 days.

“Americans are dreamers too,” Trump said, his strident anti-immigrant rhetoric shelved for the evening, at least. “No matter where you have been, or where you come from, this is your time.  If you work hard, if you believe in yourself, if you believe in America, then you can dream anything, you can be anything, and together, we can achieve anything.”

Canada was not mentioned. (Neither were France, the United Kingdom, Saudi Arabia, Iran, Japan, or Germany. China and Russia were cited as “rivals who challenge our interests, our economy, and our values.” Special investigator Robert Mueller was not seen in the chamber.) Trump’s now-bromidic promise to erect “a wall on the Southern border” was regurgitated, but there was no vow this time to precipitously shred the North American Free Trade Agreement.

“From now on,” the president said, “we expect trading relationships to be fair and to be reciprocal. We will work to fix bad trade deals and negotiate new ones.”

High in the balcony, dressed in a suit of shimmering Taj Mahal ivory and smiling professionally, the First Lady of the United States received a standing ovation from the Republican side of the chamber as she entered, but many Democrats abstained. What Melania Trump—newly post-partum in 2006 while her husband purportedly was making hay with a pornographic-film actress from Louisiana (the state he would carry by the widest margin of all in 2016)—truly was thinking on Tuesday night, only her diary may ever know.

As ceremonial as it is serious, the State of the Union message, mandated in the Constitution, enfolded all three branches of government—although only four of the nine justices of the Supreme Court showed up. Also: assorted generals, admirals, cabinet members and ambassadors, and what collectively is the oldest Senate in the 229-year history of the body—a doddering of dotards who glad-handed and back-slapped their way to their desks on opposite sides of a carpeted crevasse that never has been deeper.

Who among the minority party applauded and bellowed and hooted as Donald J. Trump arrived? Elizabeth Warren but not Bernie Sanders; losing Vice Presidential candidate Tim Kaine, but none of the African-American Democrats draped in Kente cloth; the Joint Chiefs of Staff but not Chuck Schumer. Yet Trump’s speech was filled with the kind airy ideals that not even the most partisan solon could abjure.

“We want every American to know the dignity of a hard day’s work,” the president declared. “We want every child to be safe in their home at night.  And we want every citizen to be proud of this land that we love.

“We can lift our citizens from welfare to work, from dependence to independence, and from poverty to prosperity.”

This was a road that The Donald had travelled before. Last February, in his first speech in this same august hall that once trembled to the words of Winston Churchill, Nelson Mandela, and Franklin Roosevelt, Trump had promised “true love for all people” and called on Congress and the courts to display “the courage to share the dreams that fill our hearts.”

READ: The President of the United States is unwell

“Everything that is broken in our country can be fixed. Every problem can be solved,” Trump had intoned in 2017, “And every hurting family can find healing, and hope.” Yet just one year later, seven out of ten Americans believe that the problem is Trump himself.

Even before his arrival at the Capitol on Tuesday, Trump was striving to spin his 12-month whirlwind of lies, libel, and lunacy into a schoolboy’s field trip, admitting to a luncheon audience of television anchorpeople at the White House that:

“I’ve really learned a lot. You know, governing—when you’re a businessperson, you don’t have to worry about your heart, the heart.  You really do what’s best for you—you know, for almost purely monetary reasons. You know, you make your money.  You’re competing against people. In many cases, you don’t like them, you want to beat, and all that stuff.

Cancelling protection against deportation for millions of young “Dreamers;” insulting respected members of Congress—even of his own party —as wacky, cryin’, lyin’ and liddle; re-tweeting whatever was reported or invented on Fox & Friends at six o’clock in the morning; decrying immigration from “shithole countries;” labelling neo-Nazis as “people that were very fine people;” calling any professional football player who kneels during the national anthem a “son of a bitch”—all of this fire and fury was written off to an ingenue’s first year on the job.

“I want to see our country united,” the president proclaimed at the luncheon.

“I actually asked a longtime senator—happened to be a Democrat—‘Is this the worst you’ve ever seen it?’  He said, ‘Absolutely not.  During the impeachment of Bill Clinton was much worse than this’.”

With Democrats widely predicted to sweep back into a majority in the House in this November’s election, the impeachment of Donald Trump may well preoccupy the incumbent, come one year from now. Dozens of female Democrats wore black to Trump’s oration, as if outfitted in advance for The Donald’s political funeral. (Last year, the very same liberal ladies wore white.) But likely 2020 presidential candidates Warren of Massachusetts and Kamala Harris of California both conspicuously eschewed this show of sisterhood for shades of blue.

“Americans fill the world with art and music,” Donald Trump told them, with one year down and three or seven more to come. “They push the bounds of science and discovery. And they forever remind us of what we should never forget:  The people dreamed this country. The people built this country. And it is the people who are making America great again.”

“USA!” thundered the Republicans below his podium.

“See you in court” echoed the Democrats, in words nobody could hear.

FILED UNDER: Donald Trump Editor's Picks state of the union