The psychological toll of the Trump era

Shannon Proudfoot: With his election loss, Trump's rule by chaos is drawing to a close. And with it our role as unwilling audience members in his drama. 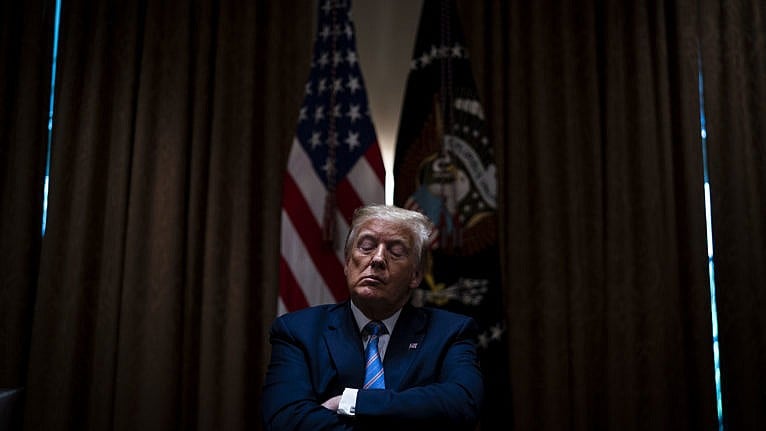 If what you wanted was a resounding Election Night repudiation of Donald Trump and Trumpism as compensation for the last four years of never-ending chaos and malice, this week was one extended sad trombone. But if what you wanted was simply for the bad man to go away, the eccentric and constipated American electoral system delivered, eventually.

Joe Biden was declared the winner on Saturday morning after Pennsylvania was called for him by the Associated Press, securing him the 270 Electoral College votes required to become the next U.S. president.

It has been a long, punishing 10 or 12 years since that centaur-on-an-elevator ride back in 2015. It’s difficult now to even conjure up the sense memory of a time when the news cycle would contain just one tragedy or scandal in a week, as opposed to a constant wind tunnel of malfeasance that basically erased itself as it went along.

“It’s really just exhausted the citizens,” says Kimberly Rose Clark, founding partner of Bellwether Citizen Response, a New Hampshire-based consultancy that uses behavioural, cognitive and emotional research to shape political and advocacy campaigns. “They don’t see them anymore, they don’t feel them anymore, they don’t have the capacity to feel anymore and think rationally about what’s being exchanged in terms of policy and communications.”

Politics is always all-consuming for partisans who care a lot, or for people directly affected by the policies that result, but the sheer velocity and volume of the Trump era has trapped tens of millions of unwilling audience members far beyond the borders of the United States. To be a citizen of the world over the last four years has been to show up at an adult dinner party and end up stuck at the table with a spoiled, defective child who refuses go to bed and keeps screeching “Look at me!” at ever-increasing volumes as his emotional state unravels.

On Election Day itself, it was a British journalist quoting an American speaking to a British news network that perfectly captured it. “A swing voter in Michigan told the BBC he chose Biden this time because ‘He seems like the kind of guy where you don’t have to listen to him talk every day,'” Laurie Penny tweeted. “I’ve been thinking about that for hours. ‘Biden 2020: look, at least you can take your eye off him for five minutes.'”

A few days earlier, Biden’s campaign had released a striking new ad. It was spare and slow, black and white, the images all unmistakable shorthand for this combustible moment: medics in full-body PPE bearing a shrouded body on a stretcher, a sheriff at the door of an anxious-looking family, a vast sea of Black Lives Matter marchers.

The soundtrack was Biden reciting a passage from the Seamus Heaney poem “Doubletake,” which he quoted throughout the race:

History says, don’t hope
On this side of the grave.
But then, once in a lifetime
The longed-for tidal wave
Of justice can rise up,
And hope and history rhyme

Then came the tonal shift: “Hope for a great sea-change on the far side of revenge.” We saw Biden affixing something to the shirt of a small Black boy, Biden seated in a crowd with his head bowed, a crowd of protesters with their fists thrown up in rage toward Trump Tower. The “revenge” here was not the American electorate’s, but Trump’s; what will we all be when we are no longer compelled to be dress-up dolls in someone else’s vengeance fantasy?

Trump appeared nowhere in the video, and yet the entire thing depicted the shadow he casts. The ad, much like the final days of the campaign, was less about the specific policy failures and outright obscenities of this administration than it was about some existential sense of redemption for and relief from the psychological toll of the Trump era.

“I think it is about that human drama. From our perspective and from the vantage point of Canadians, there is a bad guy here and there is a good guy, and we want to see the bad guy lose,” said Peter Loewen, a professor in the department of political science and the Munk School of Global Affairs & Public Policy at the University of Toronto.  “I don’t want to get too flowery about it, but this is the most important country in the world and we are a human family in some sense…and you would hope that we move toward some goals more than others.”

Thomas F. Pettigrew, a professor emeritus of social psychology at the University of California, Santa Cruz, spent weeks before the election being peppered with nervous emails from friends and acquaintances who knew he’s a survey specialist and wanted his reassuring interpretation of the polls. One of Pettigrew’s neighbours in Santa Cruz—just one person on their block is a known Trump supporter—organized a get-together so he could give a short lecture on the only real questions anyone wanted to ask: is Biden going to win, and by how much? Emails asking the same poured in from colleagues he’s worked with in Germany, the Netherlands and Scotland, too.

“I’m a tea leaf, I guess,” Pettigrew says. “I could see incredible stress.”

He authored a much-cited paper in 2017 identifying five common social psychology traits of Trump supporters; they see the world in terms of winners and losers, for one, and they are not objectively destitute, but rather have less than they expected to at this point in their lives or less than they believe “less deserving” people do. Pettigrew was certain even on Monday that Biden would win, but he predicted too that everyone pinning such intense hopes for instant redemption on that outcome would be in for a bump down to earth, because Biden simply can’t undo four years of corruption and destruction instantly. “I think there will be a certain amount of euphoria that’s unjustified. They think the world will return to something like normal except for COVID-19,” he says. “And it won’t, of course, immediately.”

Indeed, the election results themselves did not deliver the decisive cathartic release many people badly wanted, even with Biden’s lead in both the popular vote and electoral college tally likely to increase when ongoing vote counts in Nevada and Georgia are completed. The outcome—more than 70 million votes had been counted for Trump as of Saturday morning, about 7 million more than the 2016 total—suggested that last time around was not an accident and huge swathes of Trump voters did not want a refund on the last four years after all, or believe that someone ought to pay for the unnecessary deaths of a quarter-million of their countrymen and that someone should be the man in charge.

Or—perhaps even more troublingly—the results point to a political system so twisted and corrupted that many millions of people felt exactly that way, but they were muted by voter suppression, gerrymandering and brutal political manipulation.

“There’s a sense that this has been un-American, in the full sense of the term,” Pettigrew said of the Trump era. “I think a lot of Americans feel that—at least the anti-Trumpistas—that this will be a kind of sign, not only to themselves but to the world, that America is coming back to what it was.”

There is also the possibility that Trump’s defeat will be a spark rather than a snuffer. It’s an outcome the president himself overtly stoked over the last week with tweets predicting violence and fury; in the ham-fisted way of Trump, they were obviously instructions rather than warnings. News images of American cities preparing for Election Day looked like they were hunkering down before a hurricane, erecting barricades and cloaking stores and public buildings in plywood sheaths.

Clark drew a deep sense of foreboding from reports of record gun and ammunition sales stripping store shelves in the run-up to the vote, driven by people afraid of whatever was coming next. “We’re not rounding any corners,” said Clark. “Things are just on the precipice now, but it doesn’t take a whole lot to induce panic, and once that happens, all bets are off.”

A week or so before the election, Megan Garber wrote an excellent extended meditation in The Atlantic on how Dwight Schrute, the malevolent buffoon of The Office, was a harbinger of Trump in proving the lie of, “He’s too incompetent to be dangerous.” Garber traces Dwight’s evolution from an essentially harmless and deserving punching bag to a true menace whose actions have consequences, for others and eventually for himself. That is where the catharsis of Dwight lies, she argues, because in Trump’s America, shamelessness has seemed like a shield from all consequences.

“This might help explain why the age of Trump has also been an age of ‘chaos.’ Press briefings, these days, are chaotic. Entire news cycles are chaotic. I recently found myself describing an omelet I’d made as chaotic. The assessment is useful in part because it channels the frenzy of this moment…” Garber wrote. “But to describe something as chaotic is also to give up on describing it at all. It is to concede to the mess, whether the thing that is breaking is an egg or a democracy.”

The election results may have revealed themselves slowly, but once they did, chaos ceased to reign, or at least it started to look desperate rather than all-consuming. Trump delivered a live address from the White House on Thursday evening that was so flaccidly unhinged and dishonest, he barely looked committed to it. Several news networks cut away immediately because his rambling was so baseless; whether they finally found the will to do so because accusing the entire democratic system of corruption is beyond the pale, or because Trump was already looking like yesterday’s man, is up for debate.

“During an NBC town hall last month, anchor Savannah Guthrie condemned Trump’s embrace of conspiracy theories and falsehoods, telling him, ‘You’re the president, you’re not like someone’s crazy uncle,'” wrote Alyssa Rosenberg in the Washington Post. “On Thursday, networks stopped treating him like the former and started treating him like the latter.”

So here’s an incredible thought to wear like a weighted blanket for your exhausted mind. One day—not right away, and frankly probably not even very soon—you will go an entire day without hearing Donald Trump’s voice or even his name. It is impossible right now to know if his section of the history books will be a dark little plot diversion that gets summed up in a trivia text box low on one page, or if he represents the opening of a whole new chapter.

But however it ends up, today was the beginning of President Donald J. Trump becoming an artifact of the past, rather than the raving, preening, menacing, mewling centre of the entire world’s present.