The sound and the fury of Bernie Sanders, America's rageoholic

Talk of ‘electability’ makes Bernie Sanders mad. So do Putin, Wall Street and, well, everything. 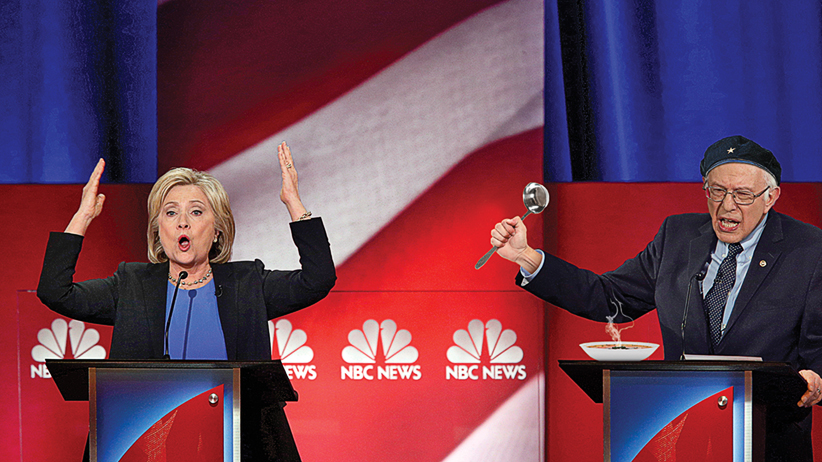 It was the final debate before Democrats begin choosing a presidential candidate, and Hillary Clinton was saying a few mildly critical things about the policies of her surging rival, Bernie Sanders. Suddenly, Bernie’s face appeared in split screen. He gave Clinton a sideways look. He made some Old Man Noises with his lips. He was either disappointed or angry. He was angry. Bernie Sanders is always angry.

The way Bernie tells it, America is broken. Every institution is corrupt, every election is bought, every banker is a crook and every can of coffee isn’t as big as it used to be, dangummit. His solution? Burn it to the ground and build a socialist utopia in which Americans dress in durable hemp cloth and embrace a barter economy. (I give this paradise roughly six months before Goldman Sachs finds a way to sell collateralized debt obligations made up of chickens and cigarettes.)

The Republican debates have been pageants of extremism and prejudice. The Democratic contests seem, on the surface, more traditional and familiar. At one point Sunday night, the candidates engaged in a serious discussion about the Black Lives Matter movement. In a Republican debate, this segment would have been replaced with eight minutes of Poking a Live Mexican with a Stick.

But are the goals of Sanders any more plausible than, say, Donald Trump’s border fence? Certainly the core of both campaigns is rage—at very different things, but rage nonetheless.

Still, there is a growing affection for Sanders, the only presidential candidate who needs three minutes to order a bowl of soup. “I’d like it hot, but not too hot. Too hot is worse than cold. Not that I want it cold, you understand? That would be disgusting. And enough with crackers! Put the crackers in your purse and take them home. You’ve earned them. Big Cracker telling me how to eat my soup! Liquids and solids together? It’s an abomination! Now, for the placement of the spoon…”

Bernie says “billionaire” as though it’s a swear word. His disdain for the rich and powerful is so palpable that we can only assume it influences every element of his policy platform. His new health care plan, for instance—surely there’s something in there about amending Obamacare to give a headful of lice to each member of the one per cent.

Oil companies are the worst, Sanders says. No, wait, private insurance companies—they are the absolute worst. Except for drug companies, banks and brokerage firms, which are worster than the worst. They are the WORSTEREST! If Sanders wrote a bedtime story for kids, it would be titled, How Can You Sleep??

Sensibly, Clinton has raised questions about the electability of a man known to voters as a “Democratic socialist” and to children as “one of the men who heckles Fozzie Bear.”

But who has any clue what qualifies as “electable” in 2016? Four years ago, Mitt Romney caught heck for a throwaway line about having “binders full of women.” This time around, Trump saw his poll numbers rise after proposing a ban on Muslims and describing illegal immigrants as rapists. Just wait until he unveils his plan to save Social Security: the Elderly Hunger Games. (Spoiler alert: Clint Eastwood wins.)

Talk of “electability” makes Bernie mad. To judge from the debate, so does Bashar al-Assad, Vladimir Putin, Wall Street, climate change and everything.

There were times when both candidates seemed to agree (racism bad, children good). But the sturdiest of common ground between Clinton and Sanders was found in their seething disdain for a question about Bill Clinton’s potential role after the election. I’m fairly sure Hillary tried to use her eyeballs to strangle the moderator. Eventually, she suggested her husband might make a fine “goodwill emissary”—travelling the country in search of new ideas for government. Anything to keep him from wandering into the Situation Room in his bathrobe, I guess.

Bernie was more Bernie about it. He got angry. “That question annoys me,” he said.