The sprint for moderate votes in New Hampshire 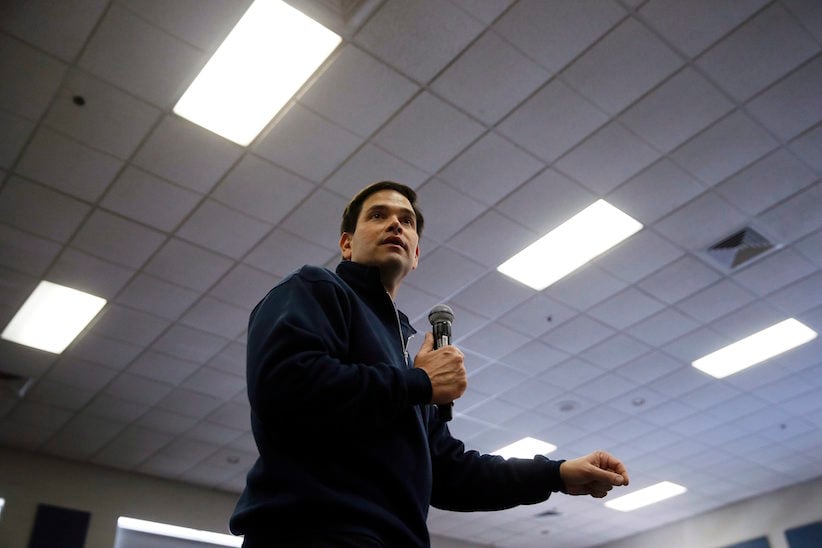 BEDFORD, N.H. – The path to the U.S. presidency potentially passes through voters like Ari Pollack — moderate, politically independent New Hampsherites with the power to alter the Republican race.

Tens of thousands of voters like this real-estate lawyer will decide who becomes the mainstream proxy to challenge the likes of Donald Trump and Ted Cruz.

He lined up to get into a rally for Sen. Marco Rubio Sunday but cautioned: “I’m not there yet.”

The suspense could linger into Tuesday night. Surveys show a tight cluster of candidates who could emerge from the New Hampshire primary as Mainstream Option No. 1, behind the frontrunner Trump.

Voters like Pollack have real clout in New Hampshire. It’s a centrist state, with open rules allowing people to vote in whichever primary they choose. In the last Republican vote here, nearly half were registered independents and a whopping three-quarters called themselves liberal, moderate, or only somewhat conservative.

Pollack is the kind of voter who’d support John McCain, which he did in 2008. And the type who’d later ditch McCain because he couldn’t stomach his running mate Sarah Palin, then vote for Obama — which he also did.

This time Pollack’s impressed with the smooth-talking rookie senator from Florida.

But there’s a nagging doubt about Rubio’s lack of experience — he’s never served in a cabinet, run a department, or made executive decisions like the governors also vying for the mantle of Mainstream Option No. 1: John Kasich, Chris Christie and Jeb Bush.

Rival campaigns have been driving that point home. On Sunday, some tailed Rubio with posters calling him another Obama — they didn’t mean it as a compliment.

That’s the context for Rubio’s debate flub the previous night.

He’s so committed to repelling the knock that he’s just another incompetent rookie with a silver-tongue, like Obama, that he repeats a certain line over, and over, and over again.

He repeats it with such programmed precision that his rivals have taken to calling him a robot. In fact, other protesters outside a Rubio event also dressed like robots Sunday.

But Rubio stuck to his program.

He began a town-hall meeting by alluding to the elephant in the room: people were laughing at him. His former friend, Bush, was telling a TV interview, “He’s so scripted, he’s so gifted… But he came across as totally scripted and kind of robotic.”

It goes like this: Obama is not some inexperienced dilettante, but a calculating political operator who has changed America, and this election is a referendum on whether the country continues down his path of destroying the free-market, small-government genius that has made America, in his words, the greatest country in the history of mankind.

“I said this last night,” Rubio told the crowded rally.

“I will say this every chance that I get.”

Democrats were quick to mock his debate performance. Rubio pointed this out. He speculated that is was because they’re most scared of him — and, indeed, polls suggest he’d be a formidable threat in the general election.

His lines felt familiar. That’s because they were.

A Canadian Press reporter jotted down 17 colourful quotes from a Rubio speech and subsequent town-hall question-and-answer session, and later looked for an original one: 15 showed up in Google, from previous speeches.

Rubio’s campaign team calls that message discipline: Keep pounding away at the same themes, until they register with voters. His aides have limited the potential for deviation by literally shielding Rubio from reporters asking random questions.

But he worked the crowd energetically Sunday, getting his picture snapped and signing posters long after every event. He signed a poster for Pollack’s son.

So, did he win Pollack’s vote?

Not yet. Pollack wished he’d been a little more contrite about having a bad debate: “That would have provided a level of transparency voters are looking for.”

He said the lack of spontaneity wasn’t fatal, only another variable to consider. Experience is the bigger one. And he wonders whether Rubio might be better-suited to be vice-president for now.

“I’m still undecided,” he said, while exiting the event.

“I’ve got to make a decision pretty soon. I’m running out of time.”