The sweet, hollow song of the failed Democratic hopeful 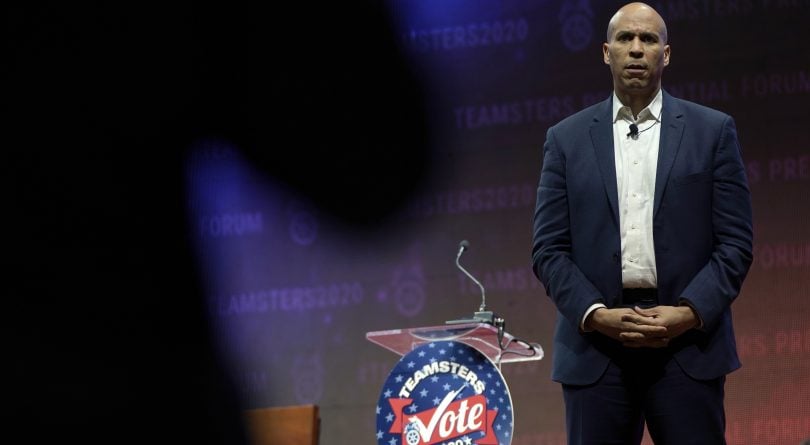 “The story of America is not done yet,” Senator Cory Booker, Democrat of New Jersey, was saying just the other day—actually, it was last February—in the literal and proverbial snows of New Hampshire, but now the story of Cory is.

On Monday, more than a year after the marathon campaign for the Democratic presidential nomination began, and just three weeks before the first primary ballots of 2020 are to be cast in the Granite State and beyond, Booker became the latest of more than two dozen contenders and pretenders to abandon his quest to evict Donald, Melania, and Barron Trump from the White House. The senator’s surrender came thousands of speeches and millions of dollars after he kicked off his journey to nowhere with the plangent cry in a pinball and pool arcade in Manchester, N.H. that “you can’t lead the people if you don’t love the people!”

The problem was that not enough people with not enough dollars loved Cory Booker in return. Like all of the other dropouts, the young, hip, cueball-headed senator couldn’t muster enough percentage points in enough opinion polls to qualify for the next Democratic debate, and he couldn’t corral enough cash to keep him hustling across the hustings until only a single statesman is left standing to take on the Combover-in-Chief.

RELATED: Can love propel a Democrat to the White House?

America’s incumbent president clearly was staggered as yet another Spartacus fell on his sword.

“Really Big Breaking News (Kidding),” Trump tweeted on Monday when the story broke. “Booker, who was in zero polling territory, just dropped out of the Democrat Presidential Primary Race. Now I can rest easy tonight. I was sooo concerned that I would someday have to go head to head with him!”

For love-guru Marianne Williamson and ex-Quebecker Kamala Harris, not to mention the platoon of other members of Congress and sitting and ex-governors, plus innumerable locos, tyros and tycoons, the Democratic free-for-all has turned out to be a spectacularly exhausting and expensive waste of time.

All of those 99-county bus tours and farmhouse “listening sessions” in Iowa, and all of those church suppers and gospel choruses in South Carolina proved pointless, a cruel ruse on loyalists who believed they had picked a president-in-waiting. For the failed aspirants, the shameless groveling for handouts from contributors large and small is over as well, at least until 2023.

Fifty weeks ago, a Maclean’s reporter watched Kamala Harris whip a crowd of several thousand snow-covered anti-Trumpers into a whooping froth inside and outside a cathedral in Portsmouth, N.H. “I plan on prosecuting the case against people who do not tell the truth!” she railed. As theatre, it was grand. But when this show goes dark, nobody gets a refund.

RELATED: Is ailing America ready for a radical prescription?

For the manifold losers, all that remains when reality bites is how to say goodbye. Thus:

“It’s important to know when it’s not your time,” tweeted Kirsten Gillibrand, the feminist senator from New York who gave up the ghost in August.

“I’ve determined that it simply isn’t our time,” admitted Julián Castro, the former mayor of San Antonio, who insinuated that Joe Biden was losing his memory even while Castro trailed the former vice president in the opinion polls, thirty-odd percent to nearly nil.

“You make me hopeful for what our country can still achieve.” said Steve Bullock, governor of Montana, when he packed it in.

“I’ve taken stock and looked at this from every angle, and over the last few days have come to one of the hardest decisions of my life,” was Sen. Harris’s swan song in December.

“I’m not a billionaire,” she wrote in a social-media post. “I can’t fund my own campaign. And as the campaign has gone on, it’s become harder and harder to raise the money we need to compete.”

(Somehow, non-billionaires Joe Biden, Bernie Sanders, Elizabeth Warren, and Amy Klobuchar remained standing at press time. But few politicians possess the humility to admit that their problem was not cash, but their own incoherent platforms, pockmarked pasts, and unappealing personalities.) 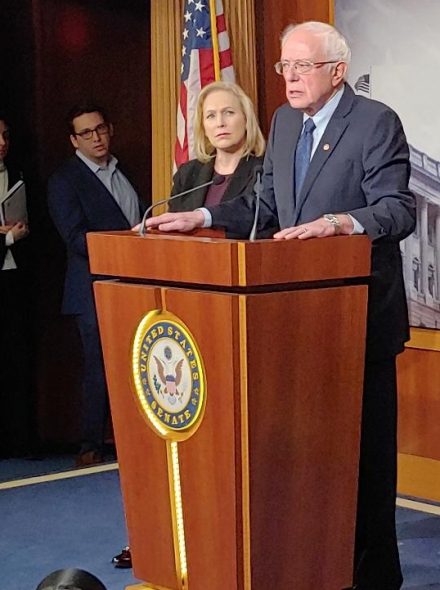 Sen. Kirsten Gillibrand (D, N.Y.) eyes Sen. Bernie Sanders (I. Vt.) during a news conference at the U.S. Capitol on Jan. 9, 2020. Sen. Gillibrand suspended her campaign for the Democratic nomination for president in August, 2019, while Sanders remains a front-runner in the weeks before the first caucuses and primaries. (Allen Abel)

“We’ve given voice to the forgotten communities and the forgotten people in the United States,” Congressman Tim Ryan of Ohio contrived when he gave up in October with zero per cent in the polls. (The high point of Ryan’s campaign came when, after a mass shooting in Texas and Ohio, he snarled that “Republicans need to, quite frankly, get their shit together and stop pandering to the NRA because people are getting killed.”)

“This journey has been more exciting and more rewarding than I ever imagined,” gushed John Hickenlooper, Colorado’s governor.

“It has been a profound honor to represent our state on the national stage in the presidential race,” agreed Jay Inslee, Hickenlooper’s counterpart in the state of Washington, when he dropped out. “I want to continue to stand with you in opposing Donald Trump and rejecting his hurtful and divisive agenda.”

“My presidential campaign ends today, but this also is the start of a new passage for the issues on which our campaign ran,” was Congressman Eric Swalwell of California’s finale. “We need a candidate who’s tested . . . because Trump is the best political puncher ever in American politics, so whoever we send to that debate stage is going to have to take a punch, throw a punch and then unite the country at the end of the campaign.”

“These are not times to despair; they are simply times to rise up,” Marianne Williamson soothed as she exited last week. “Things are changing swiftly and dramatically in this country, and I have faith that something is awakening among us. A politics of conscience is still yet possible. And yes . . . love will prevail.”

And then there was Beto O’Rourke, the charismatic Irish Texan with the Mexican nickname and the perfect young family who accrued six million dollars in contributions within hours of joining the race, inviting comparisons with John F. Kennedy. It was O’Rourke who warned the nation’s riflemen, during one early debate, that “Hell, yes, we are going to take your AR-15s!” It was O’Rourke who live-streamed his own dental cleaning.

“Our campaign has always been about seeing clearly, speaking honestly, and acting decisively,” O’Rourke professed when he flamed out just after Halloween, having run out of money, if not conceit. “In that spirit: I am announcing that my service to the country will not be as a candidate or as the nominee.”

“Oh no, Beto just dropped out of race for President despite him saying he was ‘born for this,’” tweeted Donald Trump at the time. “I don’t think so!”