On the final day of the DNC, Allen Abel crosses the Delaware to the home of Walt Whitman, the poet who once asked 'Who are you who would talk or sing to America?'

No one ever expects poetry from Hillary Clinton, and so Walt Whitman wrote it for her, a century before she was born, predicting her and placing her in a capital.

In Philadelphia, it is the final morning of the Democratic National Convention, later to elide into the sweetest night of Clinton’s political career. Downtown, delegates and demonstrators are entwined in their final ritual tango, awaiting—or abhorring—the impending acceptance by Clinton of her party’s nomination for the presidency.

Already humanized, feminized and lionized in tens of thousands of chosen words by hundreds of convention speakers, she is to be the parley’s ultimate orator, issuing an ultimatum to a fractured, frothing electorate: vote for her, or vote for ruin.

“”We are clear-eyed about what our country is up against. But we are not afraid. We will rise to the challenge, just as we always have,” she will say in the late night arena.

But in the morning, across the Delaware River in Camden, N.J., across the street from a forbidding county jail, Walt Whitman House, the tan brick edifice where the greatest of American poets—perhaps the greatest poet of any nation—lived and died in the 19th century, beckons a wanderer yearning for inspiration and relief.

Even in the 1850s, the Good Gray Poet saw the fury and frustration of 2016 coming, yearning for a vigorous democracy “Where the populace rise at once against the never-ending audacity of elected persons . . . Where the citizen is always the head and ideal, and President, Mayor, Governor and what not, are agents for pay.”

He even predicted the downfall of the shuttered Trump Plaza Hotel and Casino, just down the pike in Atlantic City, and the moral bankruptcy of the man who built and then abandoned it.

Do you think a great city endures?
Or a teeming manufacturing state? or a prepared constitution? or the best built steamships?
Or hotels of granite and iron?
Away! these are not to be cherish’d for themselves,
They fill their hour, the dancers dance, the musicians play for them,
The show passes, all does well enough of course,
All does very well till one flash of defiance.
A great city is that which has the greatest men and women,
If it be a few ragged huts it is still the greatest city in the whole world.

There are few who would give the title of “greatest city” to forlorn Camden, N.J., home of Campbell’s Soup, a fine aquarium and thousands of derelict hovels and downtrodden souls.

In front of Walt Whitman’s house this day—and nearly every day—is a man named Dion Washington who takes your dollar and promises to guard your car while you visit the museum within. Limping from a gunshot to his lower body, Washington claims that he once played football for the Philadelphia Eagles, and that his father, Ted, was the Phillies’ shortstop. But there is no record of this in the relevant encyclopedias.

“I got a great personality,” Washington says. “I’m a Capricorn.”

In Camden, he says, “back in my day, in the 70s, you settled things with a physical fight. Now even the little kids got guns.” 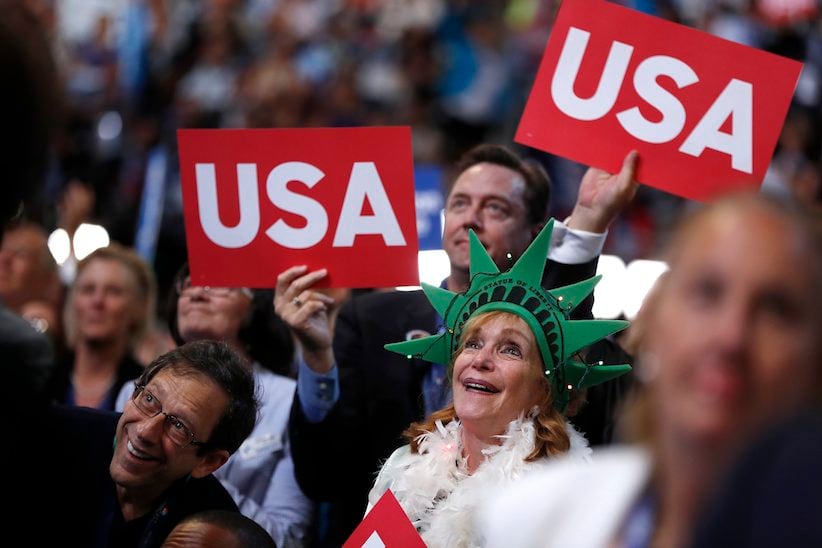 Delegates on the final day of the Democratic National Convention in Philadelphia. (Carolyn Kaster, AP)

“Has Barack Obama let you down?” he is asked. Certainly there is little to show in this country’s benighted inner cities for seven-plus years of Obama’s fine-tuned words and honest, mourning tears. (It should be noted, however, that the President came to Camden in May to laud the city and its newly restructured police force as “a symbol of promise for the nation.” But some residents complained that the comparative tranquility of the city’s streets has come at the price of hundreds of trivial arrests, including the crime of riding a bicycle without a working bell.)

“He didn’t let me down, but I like his wife better,” the car-watcher chuckles. “But now I’d like Hillary to be the first woman president of the United States. It could help other women accomplish the goals in their lives.”

“What about Donald Trump?”

It is a busy Thursday at Walt Whitman’s house in Camden. A burly fellow named Bob is sitting on the stoop with an unlit cigar and a can of acetone; he’s just finished dissolving some gang-bangers’ graffiti from the front of the poetic domicile.

There’s a fading tattoo on the handyman’s left biceps that reads “Bob & Debbie.”

“Still with Debbie?” a reporter wonders.

“No,” Bob says, pointing to another inscription on his left arm. “And I’m not with Maggie either.”

Nor is Bob with Donald Trump, though his status as an older white working man might suggest an affinity for the never-ending audacity of the New York Russophile.

“Does Donald Trump say anything that touches your soul?” Bob is asked.

“Nothing good,” he responds.

Just before noon, another Bob—“call me Bob the Bug Man”—shows up with a big plastic bucket of rodent poison to be spread in the infested backyard. So much for Whitman’s eulogy for all creatures great and small:

I think I could turn and live with the animals, they are so placid and self-contained;
I stand and look at them long and long.
They do not sweat and whine about their condition;
They do not lie awake in the dark and weep for their sins;
They do not make me sick discussing their duty to God

“Trump or Hillary?” Bob the Bug Man is asked. He’s another white guy in his 50s, a registered Republican.

“I’ll probably just flip a coin,” the exterminator replies. “I like that Trump’s not a politician, he says what’s on his mind.
You want those qualities in a politician—someone with balls.”

“But I don’t want a president who’s going to drop water balloons on people’s heads from the White House. What really got to me was when he made fun of that disabled guy. I mean, who does that?”

Bob the Bug Man trots up the front steps, turns around and wonders:

“Is there anybody else running?”

Inside the ancient house, it is musty and still. A history student and part-time guide named Pauline Miller descends from the archives on the upper floors—the same steps down which Whitman’s warm corpse was carried in March of 1892, to be autopsied in the parlour.

“After seven years of Obama, have you become used to poetry from a president?” she is asked.

“When he was speaking last night,” she replies, “the bar I was at got very quiet, and people asked the bartender to turn up the sound.”

“Do you think they will do the same for Hillary?”

“To me,” Miller says, “Hillary is like a teacher that you really like, but she’s really, really strict.”

“Who are you, indeed, who would talk or sing to America?” Whitman asks Hillary Clinton and Donald J. Trump. “Have you studied out the land, its idioms and men? Are you very strong? Are you really of the whole people?”

“Behold a woman!” he answers himself.

She looks out from her Quaker cap, her face is clearer and more beautiful than the sky.
She sits in an armchair under the shaded porch of the farmhouse,
The sun just shines on her old white head . . .
The melodious character of the earth,
The finish beyond which philosophy cannot go and does not wish to go,
The justified mother of men.