Stock markets can erase national debt? Trump invented a decades-old economic theory last year? On both counts, not so much. 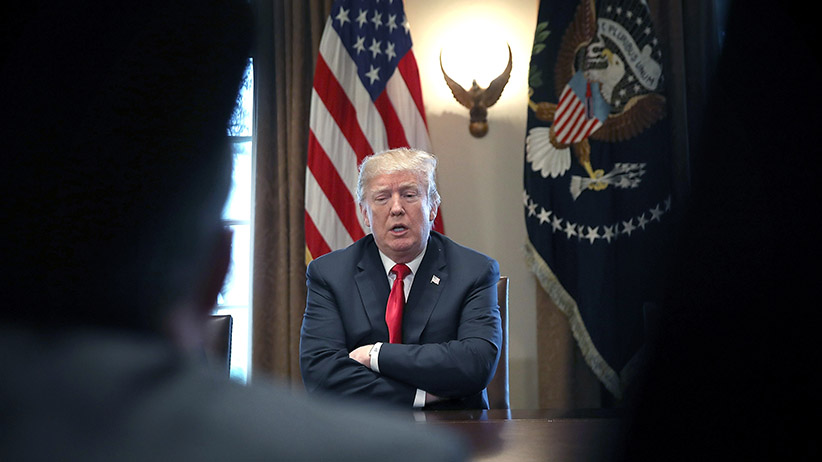 Donald Trump speaks during a meeting with leaders of the steel and aluminum industry at the White House on March 1, 2018 in Washington, D.C. (Win McNamee/Getty Images)

Early in the morning on March 2, Donald Trump tweeted that “trade wars are good, and easy to win.” When other countries “get cute”—meaning they enjoy trade surpluses with the U.S.—the president’s cure is simple: “don’t trade anymore.” Voilà, problem solved, he wrote: “We win big. It’s easy!” The reviews were instantly poor. “This is fundamentally incompetent, corrupt or misguided,” wrote Adam Posen, president of the Peterson Institution for International Economics. In his popular daily newsletter on March 5, Gluskin Sheff + Associates chief economist David Rosenberg predicted an “outright global trade war.”

The U.S. Department of Commerce counts 46,608 employees among its ranks. The president’s own Council of Economic Advisers exists to advise the president on policies that “foster and promote free competitive enterprise” and “avoid economic fluctuations or to diminish the effects thereof.” The U.S. International Trade Commission stands ready to “provide independent analysis and information on tariffs, trade and competitiveness.” But Trump’s administration has revealed that all the economists in the world, and all the informed advice they can muster, are no match for extemporaneous politicians and their lackeys.

Since Trump took power, he’s lead the charge on promoting baseless claims and crackpot theories about what makes an economy tick. Here are five of the strangest positions they’ve championed in front of a mic (or on Twitter).

Trump’s threat to slap a big tariff on steel imports, which on its face appears to apply to all countries but may ultimately be contained to only certain exporters if it ever comes to pass, appeared to be an example of the president creating policy on the fly. He unleashed a series of tweets on the morning of March 2.

When a country Taxes our products coming in at, say, 50%, and we Tax the same product coming into our country at ZERO, not fair or smart. We will soon be starting RECIPROCAL TAXES so that we will charge the same thing as they charge us. $800 Billion Trade Deficit-have no choice!

Most economic observers dispute the president’s basic thesis that trade deficits are, on their own merits, harmful to any nation’s economy. But the uncertainty created by the blanket threat may be even more damaging to the global trading system, which is premised on more liberalized trade and negotiations to that end, not protectionist rhetoric that oversimplifies and misconstrues the consequences of trade deficits. Also at issue: the president’s contention that a country requires steel to be a country.

Trump here argues that because the stock market has gone up that means he’s reducing the federal debt. He’s very confused. pic.twitter.com/4opIZZeEd6

On Oct. 11, 2017, the president conflated stock market growth with a reduction of the national debt. “We picked up $5.2 trillion just in the stock market … Maybe in a sense we’re reducing debt,” he claimed on Fox News. At the time, Wall Street was on a tear and the Dow Jones index had closed just shy of a record-high 23,000 points. What did that mean for the federal government’s debt load? Not much. As the U.S. Federal Reserve helpfully illustrates, national debt hit its own record high late last year—which isn’t surprising, since the debt has risen consistently for years. Trump, no stranger to debt in his previous life in business, may not spend a lot of time looking at charts.

3. Donald Trump thinks he invented a common economic phrase he did not invent.

On May 4, 2017, Trump sat down with editors from the Economist. During that conversation, he claimed ownership of an economic turn of phrase—”priming the pump”—that predated his usage by at least 80 years.

“I came up with it a couple of days ago and I thought it was good,” he said. The New York Times fact-checked that claim, reminding readers that priming the pump, which means infusing economic stimulus into the economy to jumpstart growth, dates back to at least the Great Depression and is widely attributable to the economist John Maynard Keynes. Google Ngrams illustrates the dramatic degree to which “priming the pump” was a topic of conversation as the world battled economic depression all those years ago (though Trump’s use of the word did spike its proliferation last year).

On July 6, 2017, as Energy Secretary Rick Perry toured a coal-fired power plant in West Virginia, he offered a lesson in Economics 101: “Here’s a little economics lesson: supply and demand. You put the supply out there and the demand will follow.”

Perry may be confident that increased coal production will find new customers, but he won’t find many of those new customers in the U.S., Canada or China. The International Energy Agency projects that global coal demand will increase marginally over the next five years, but that particular fossil fuel will see its share of global energy consumption shrink over the same period.

5. Mick Mulvaney is surprisingly honest about his own shallowness.

When the Trump administration was doing the math on its tax reform proposal, it looked to Office of Management and Budget Director Mick Mulvaney to make sense of the numbers for reporters. As Vox explained, Mulvaney committed an egregious error that would make accountants groan, and former Treasury secretary Larry Summers called “a logical error of the kind that would justify failing a student in an introductory economics course.”

What was the error? Mulvaney said the proposal, which would on its own add $1.3 trillion to the national debt, would cause enough economic growth to make the whole thing revenue-neutral and also eventually balance the budget. Most observers think it’s impossible for tax cuts to spur enough growth to achieve both those goals—but it’s hard to dig into Trump’s logic, because Mulvaney didn’t offer much. From Vox:

Mulvaney offered a baffling defense of this accounting strategy at his Monday briefing with reporters.

So how was the tax plan going to achieve revenue neutrality? Because the administration said it would.

During her daily press briefing on Oct. 30, 2017, press secretary Sanders explained the progressive U.S. tax code by comparing it to a hypothetical night at a D.C. bar, where 10 fictional journalists pay various proportions of the bill at the end of the night depending on their ability to pay. Her point was that the wealthiest reporter always pays the most; as the bar tab falls, the one-percenter journalist who gets the biggest break still pays more than anyone else—but gets an earful anyway.

Admitting the “silly” story was an “oversimplification,” Sanders used the analogy to deny claims that Trump’s tax reform plan would disproportionately benefit wealthy taxpayers. The Washington Post dug into the scenario and determined that Sanders wasn’t painting a full picture: the two richest journalists do pay more, but they also combine to earn more than half of all income—an important consideration in any conversation about tax rates.