The Trump-Clinton debate: Why Hofstra University?

After the first venue cancelled, the most anticipated presidential debate is happening at a tiny liberal arts college on Long Island 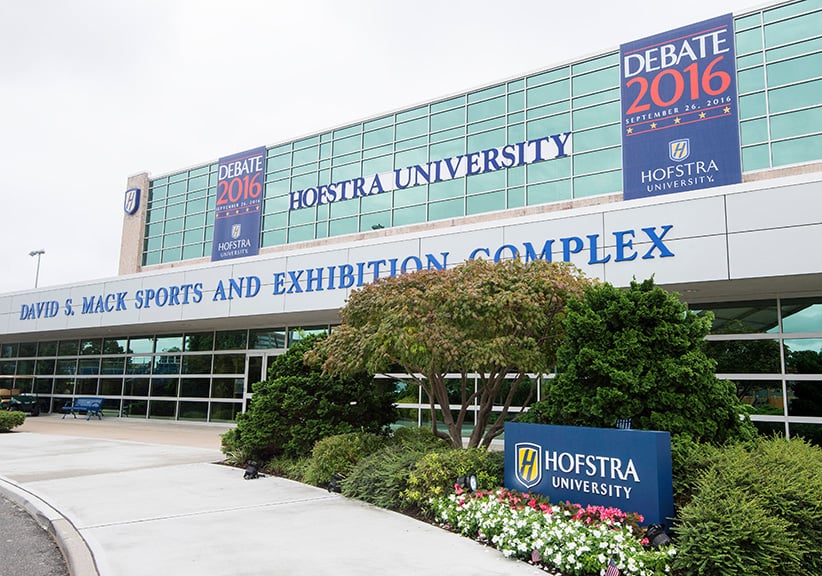 The outside of Hofstra University’s David & Mack Sport and Exhibition Complex, the location of the first presidential debate, is seen at Hofstra University, in Hempsted, New York. (Paul J. Richards/AFP/Getty Images)

On July 10, Melissa Connolly, vice-president of external relations at Hofstra University, was filming a group of exchange students at the Roman Coliseum. Her phone buzzed, with a text message reading, “Come home. We’re hosting the debate.” The original host university had resigned, and Hofstra was summoned to step in—for a debate just 10 weeks away. Normally such events take 18 months to plan, meaning this debate might not just be the most-watched presidential debate in history, but also the most impromptu. “I got a cab and changed my flights,” says Connolly. “I started working on it in the cab.”

Hofstra University on Long Island, N.Y., is a liberal arts college with 10,870 students, almost all of whom have scrambled to help organize the presidential debate. Rather than turning to the internationally renowned Columbia University or New York University, an anticipated 100 million viewers will focus their eyes on Hofstra. “We’re not on the map as much as other schools,” says student Jesse Saunders. “It’s absolutely nuts.”

Despite Hofstra’s size, it has hosted three consecutive presidential debates, the only institution with such a record. Since 2008, Barack Obama, John McCain and Mitt Romney have all taken up the podium at Hofstra, home to an annual Dutch festival and a wrestling team nicknamed the Flying Dutchmen (the university was named after a Dutch lumber entrepreneur on whose estate it was founded).

“It’s mostly about the specs,” says Connolly. “Do you have the square footage to host the debate? Do you have the square footage for a media filing centre? Are there enough hotels nearby?” Hofstra’s sports arena can host 5,000 people, although only 1,000 will watch the debate live to leave room for TV studios. A second gym has become a media filing centre, and buses will shuttle approximately 100 journalists to and from off-site hotels and parking lots.

Twenty-two months ago, Hofstra placed a bid for the debate with the Commission on Presidential Debates, the non-profit organization that oversees candidates debates. Hofstra lost the bid, but in July, the selected venue, Wright State University, resigned due to security concerns. Anticipating more violent demonstrators than in past debates, Wright State worried, “it would mean creating a police-state like atmosphere that would not be conducive to the type of learning environment we sought by hosting the debate in the first place.” Such security, the university knew, would also be pricey.

The debate will cost about $5 million to host, slightly more than the last two debates at $4.5 million because of increased international media presence. The cost includes a $1.9-million organizational fee for the Commission on Presidential Debates, as well as security, which will be a combined effort by the United States Secret Service, New York State Forest Rangers, Nassau County Police Department and Hofstra Public Safety. Facilities have also needed modification; this summer, the commission visited Hofstra for a site inspection, prohibiting certain features. According to guidelines on the commission’s website, “uncarpeted cement floors, for instance, will magnify every audience move from applause to sneezes.”

Sponsors include the not-for-profit American Association of Retired Persons, but the debate is mainly funded by a trustee, David S. Mack, a real estate businessman who is the namesake of the sports arena in which the debate will take place. Media will pay heavily: $5,500 to park a trailer on site; $325 for a table in the photography darkroom; $110 for access to a mini fridge. None of the cost of the debate will come from student tuition, which is $42,160 per year.