The unimpeachable 'Trump' will outlast U.S. Thanksgiving. But will the president?

'This turkey is not controversial,' said a Long Island innkeeper. He was not referring to the turkey at the White House. 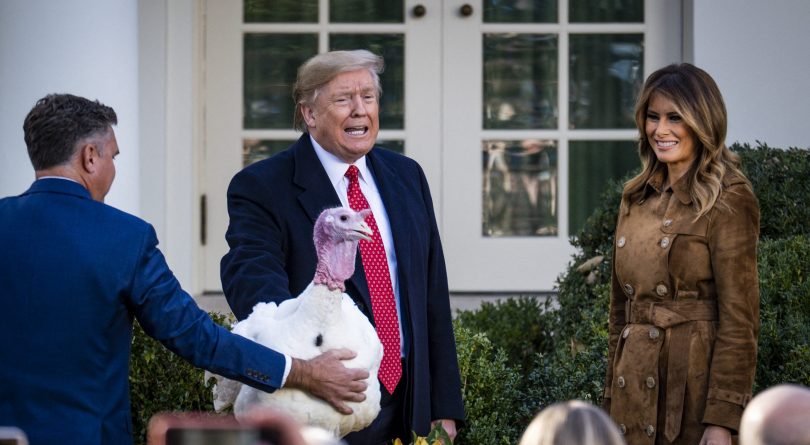 The American republic looks toward Thanksgiving and Christmas, its president only to a long season of fury and distraction and historic disgrace, and then confinement for the rest of his years in a skyscraper of shame that he built himself, with his pyrite name at the top.

“I never in my wildest dreams thought my name would in any way be associated with the ugly word, Impeachment!” Donald Trump tweeted last week. It was one of the few close glimpses into his true heart that he ever has given us. But the ugly word is his close companion now, and it always will be.

In 1998, Clinton was impeached by the House of Representatives . . . Clinton is notable as one of only two U.S. presidents (following Andrew Johnson 130 years earlier) to have been impeached.

Any day now, make that three.

The Donald still will be president when this constitutional writhing is over, at least until the next election. Nothing in the recent public statements of the Republican majority in the U.S. Senate foreshadows the flipping of 20 members that would convict Mr. Trump of “high crimes” and force his removal from office. He will stand for re-election as a persecuted victim, and millions of his Deplorables will buy his bumph that the stain of impeachment is actually a badge of honour. But his heart knows better.

(What would “removal” look like, anyway? Armed marshals dragging the Commander-In-Chief through the Rose Garden as he clutches at the thorny shrubs? President Pence and his wife Mother raising a glass of buttermilk to toast Trump’s condemnation? Or, as when Richard Nixon quit in 1974 before they could evict him, a bitter V-for-victory on the South Lawn and a helicopter ride to senescence, oblivion, irrelevance and death?)

What possibly could be worse for Fred Christ Trump’s son than to age and die a laughing stock, a loser?

TRUMP TO BE PARDONED was a headline that gained a lot of traction on Monday. It was from an inn on Long Island, in the Village of Brookville, which Bloomberg News once included in its list of the Wealthiest Towns in America, even though billionaire Michael Bloomberg himself doesn’t live there. (But Jennifer Lopez does, reportedly.)

This suburban Trump, of course, was a turkey, one of the few in the land who will not be terminated, trussed and tenderized for Thursday’s ceremonial dinner.

“We serve two thousand turkeys every year,” the owner of the Milleridge Inn, a man named Butch Yamali, told Maclean’s. “This one was born the same day as Donald Trump—June 14—but not the same year.” You rarely see fresh poultry with a Best Before date of 73 years and five months.

The last three Novembers, Yamali spared the lives of gobblers named Terry, Teddy, and Tommy and nobody beyond the Nassau County line even noticed. This year, it was “Trump” and it made every wire service in the world and the Daily Mail.

He meant the presidential Trump, not the furloughed fowl from America’s Wealthiest Town.

“Do you love the president?” Yamali was asked.

“I love everybody,” the innkeeper answered.  “I love food. I’m a caterer, not a politician. I’m into potatoes more than politics.”

The truth of Thanksgiving 2019 was that the same held true for almost everyone else in the country. While Washington obsessed over subpoenas and Senate procedure, Americans were focused on almost everything else—travel, family, the holiday feast and how the medical bills will bankrupt them if Grandpa gags on a drumstick.

On Monday evening, John Sarbanes, a Democratic member of the House of Representatives from the state of Maryland, held a “telephone town hall” and opened the lines to constituents’ questions. In a full hour of back-and-forth, the word “Trump” was spoken exactly twice, once by a caller who wondered when the president’s new NAFTA bill finally will become law—“Nancy Pelosi doesn’t want to give Trump a win,” he said—and later by a man who was aggrieved about how “Trump’s tax cuts” had ballooned the national debt.

None of the 11 callers asked when Congress was going to impeach the human Trump.

The first woman to dial in asked about Russian interference in local elections. The second caller wanted “a single-payer health plan.” The third asked, “What are going to do to stop the influence of lobbyists and secondly what can we do about term limits?”

Sue from Baltimore worried about endangered species and Alan from Annapolis was agitated about immigration—“how can we make our illegal aliens legal?”—and a woman named Lynn asked the congressman, “Do you see any progress on a bilateral approach in the House or the Senate?”

“I think it’s very tough to find common ground these days,” said Sarbanes. Of this, the seething impeachment trial in January will be further proof.

On Tuesday, the president walked out to the Rose Garden and read someone else’s quips that tried to make fun of his situation, as if a junior speechwriter possibly could understand what impeachment really means to the prisoner in the dock, and his legacy, and his children.

The occasion was the annual, ritual commutation of the death sentence for a pedigreed poult from North Carolina named Butter. (Plus an “alternate” called Bread, as if the two birdbrains can understand who is who in the presidential pecking order.)

“The Democrats are accusing me of being too soft on Turkey.”

He motioned to the two beasts, who were gobbling anxiously, if it is possible to interpret such emotions in a bird.

The president looked at the big TV with the words scrolling on it and winced.

“Unlike previous witnesses, they and I have actually met,” Donald Trump read, and even the turkeys’ faces turned red.