Donald Trump's sexist narrative belies the fact that Hillary Clinton is a known workhorse, the most well-travelled Secretary of State ever 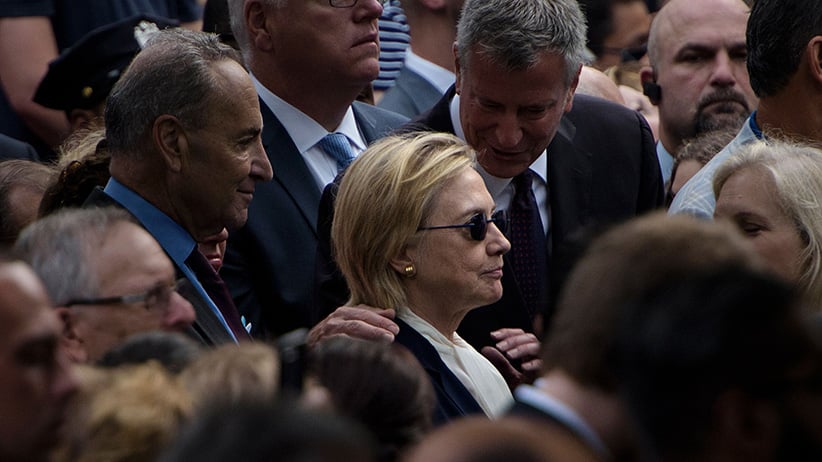 Donald Trump’s sustained attack on Hillary Clinton’s lack of “strength and stamina” began a year ago as a low hound-dog whistle. He repeated the charge like a mantra in speeches and interviews: “She doesn’t have the strength or the stamina [to be president],” Trump said on Live with Kelly and Michael last December. It was a bizarre accusation to level against a known workhorse who was the most well-travelled Secretary of State ever. But that was back when no one took the nonsense spewed by the former reality-TV star seriously; it wasn’t as if there was any chance he’d become president.

By August, Trump was framing Clinton’s alleged lack of stamina as a national security risk: Clinton “lacks the mental and physical stamina to take on ISIS, and all the many adversaries we face,” he said in his speech on national security. That there was no evidence to support the statement was irrelevant in Trump’s zero-evidence campaign. His spokeswoman, Katrina Pierson, not a doctor, went on MSNBC to diagnose Clinton with “dysphasia,” a brain disorder. Clinton countered by going on Jimmy Kimmel Live to show she could open a pickle jar—giving rise to allegations of lid-tampering.

MORE: Both presidential candidates are lying. These days, that no longer matters.

Little wonder that Clinton’s Labour Day cough, chalked up to allergies, was heard around the world. Or that Sunday’s video of a wobbly Clinton requiring assistance to get into a van after leaving a 9/11 memorial early, ofﬁcially made “strength and stamina” an election issue overshadowing all else. The Clinton campaign, true to form, stonewalled. “I’m feeling great,” Clinton told reporters on Sunday hours before her pneumonia diagnosis was made public. The prevarication gave Trump opportunity to fuse, and weaponize, his two favourite lines of attack: Clinton’s lack of stamina and “Crooked Hillary.”

There is deﬁnite strategy, one bristling with sexism, in Trump’s longstanding charges against Clinton. Strength and stamina are words used to describe men—and to sell Viagra. The words featured in the vague, bombastic letter from Trump’s physician about his health were predictable: the candidate’s “physical strength and stamina are extraordinary,” it claimed.

Casting aspersions on Clinton’s stamina also taps into archaic deﬁnitions of women as vulnerable, as the “weaker vessel,” as the Bible puts it, even though actuarial tables suggest otherwise. It’s the same thinking that holds monthly hormonal shifts render women unﬁt to handle nuclear codes, or simply unﬁt, as evident in Trump’s risible criticism that CNN’s Megyn Kelly had “blood coming out of her whatever.”

The Clinton camp made a mistake in not revealing Clinton’s illness earlier. Video evidence of presidential candidates appearing weak and thus unpresidential can kill a campaign—Michael Dukakis in a tank in 1988, a 73-year-old Bob Dole plunging more than a metre after leaning on an unsecured railing in 1996. But Clinton would be slammed no matter what she did. Should she have gone to the 9/11 memorial to sit in 30° C heat? No. Could she have skipped it? No. Announcing she was suffering from a respiratory illness that tends to afflict the elderly ran the risk that the state of her health would fuel wild speculation, as we’re seeing. Since Clinton suffered a blood clot after a fall in 2012, her health has been fodder for extreme theories: stroke, brain damage, use of a double. So she went to her usual privacy default, risking cover-up accusations. She ignored her doctor and, as women do, “powered through it,” a term that’s become the new “lean in.” On Friday, the day she was diagnosed, Clinton’s jam-packed schedule included two fundraisers, a two-hour national-security meeting and a CNN interview.

That required constitutional fortitude. But that fact isn’t reﬂected in media coverage, which has fallen in lockstep with Trump’s stamina narrative. “Hillary Clinton’s health just became a real issue in the presidential campaign,” the Washington Post declared. Many outlets, including CTV, referred obliquely to her “health episode” as if there’s more to it.

The insanity continues this week with Trump appearing on The Dr. Oz Show “to share his vision for America’s health,” and “his own health regime,” according to promos. This is a man who got out of military service because of bone spurs on his heels, who eats fast food, who doesn’t exercise, who has confused the day of the week on the campaign trail and whose vague health care plan includes repeal of the Affordable Care Act. Meanwhile, the woman accused of no stamina is expected to return to the campaign trail by midweek. With two months to go, the stage has been set. When Trump and Clinton meet for their ﬁrst debate later this month, all eyes will be on her to turn in a superhero performance. Her every blink and pause will be parsed for signs of synaptic breakdown. Trump just has to show up. His mission has been accomplished.