They may be dynastic. But let's not dismiss Clinton or Bush.

The Maclean's Editorial: Despite the popular ennui, we must not dismiss the strong candidacies of Hillary Clinton and Jeb Bush 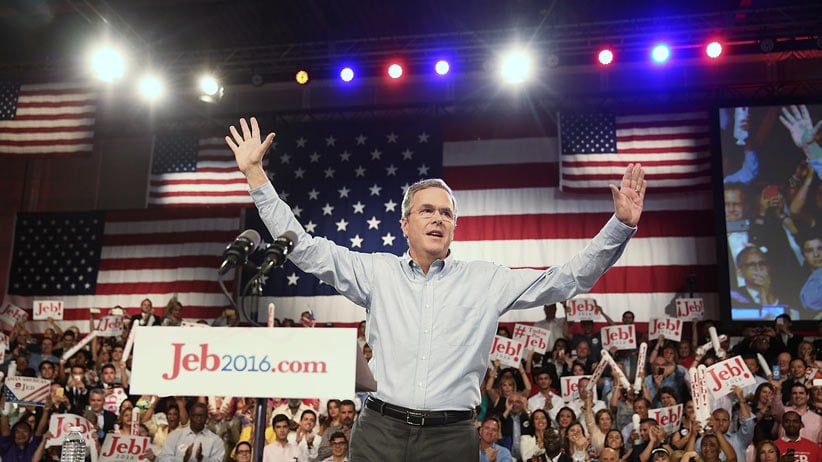 Here is something you might not know about Jeb Bush: His first name is really an acronym. He was born John Ellis Bush.

And something you undoubtedly did know: His father, George H.W. Bush, was president of the United States, as was his older brother, George W. Bush. This week, Jeb announced he’s hoping to get into the family business, as well. “I am a candidate for the president of the United States,” he told a partisan crowd in Florida, where he was a two-term governor. As a contender for the most important job in the world, Bush has much to recommend him, particularly from a Canadian viewpoint. Yet his name recognition and famous family legacy—so often an advantage in politics—may prove to be his greatest liability.

Bush is marketing himself as a moderate, thoughtful Republican candidate who can broaden the party’s appeal to capture those uncommitted voters who preferred Barack Obama over Republican nominees John McCain and Mitt Romney in the last two elections. He advocates national education standards, accepts climate change and believes in creating a pathway to citizenship for illegal immigrants. All are heresies among the Tea Party wing of the Republican party. Bush even delivered part of his speech in Spanish, paying homage to cultural diversity in an increasingly polarized nation. (Though, to be fair, he’s pro-gun and opposes same-sex marriage, so it’s not as if he’s repudiated the entire Republican platform.)

Bush’s centrist approach is a calculated risk, particularly given the Byzantine U.S. primary process necessary to win a presidential nomination. He’s polling quite poorly in Iowa, for example, where extreme positions go over well and the first of the votes will be held early next year. And he has left plenty of room for competitors with more strident views. Nevertheless, Bush has argued that a viable Republican nominee must be prepared to “lose the primary to win the general [election] without violating your principles.” This bucks conventional wisdom that says Republican candidates must swing hard to the right to capture the primary stage, then tack back to the centre during the national campaign. Whether he can maintain his optimistic, middle-of-the-road perspective when early returns prove disappointing remains to be seen; still, it’s encouraging to see a Republican candidate commit to the middle ground at this stage of the process.

Related: Why Donald Trump’s presidential campaign may not be a total joke

Beyond the opportunity to reverse the crippling schism afflicting American politics, several other factors make Bush an attractive possibility for Canadian spectators. He’s an unapologetic advocate of free trade and a supporter of the Trans-Pacific Partnership, a massive Asian free trade deal that’s crucial to Canadian interests. And he can see across borders, when it comes to energy policy. “With North American resources and American ingenuity, we can finally achieve energy security in this nation,” he said in his candidacy speech this week, a clear reference to Canada’s ample oil supplies. Perhaps Keystone XL will get built after all.

Of course, the biggest talking point for any potential Bush candidacy is not his policy vision, but the possibility he could end up facing Democrat Hillary Clinton in the 2016 presidential election—two storied last names going head-to-head for dynastic superiority. For many, the possibility of a Bush vs. Clinton rematch has been met with ennui, anger and derision. “Not another Bush. Please,” snapped a biting Washington Post editorial cartoon. The most difficult questions Bush has handled so far refer to his brother’s controversial invasion of Iraq. Clinton must also cast off lingering animosity toward her role in Bill Clinton’s presidency.

Yet fatigue over familiar names and the related claim that American politics suffer from a lack of originality miss the more salient point: Each potential candidate is a mature, fully formed individual with his or her own long list of accomplishments, carefully thought-out positions and deep interest in policy matters. Both have their eyes on the political centre. Neither should be dismissed out of hand, simply because his or her father, brother or husband has already filled the position. In fact, there’s much to be said for the long tutelage each has received at the seat of power, especially given the disappointing performance of Obama, who presented himself to voters as a fresh face and symbol of hope, then spent most of his two terms hamstrung by an intransigent Washington. Experience will matter much more, this time around.

Of course, neither Bush nor Clinton has yet earned the right to represent their respective parties next year. “Not a one of us deserves the job by right of resumé, party seniority, family or family narrative,” Bush said on Monday, referring to the Bush family legacy. “It’s nobody’s turn. It’s everybody’s test, and it’s wide open—exactly as a contest for president should be.”

So here’s hoping the 2016 presidential election will be focused on building consensus, offering compromise and reclaiming the political middle ground. And may the best man or woman win.