'This is a shot at our country and our democracy'

Bruce Heyman, former U.S. ambassador to Canada, on the storming of the Capitol, Trump's incitement and where America goes from here 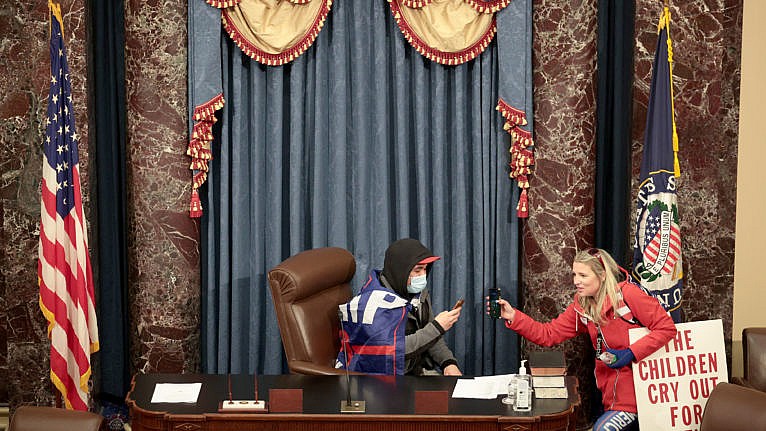 A rioter takes a seat in the Senate Chamber on Wednesday. (Win McNamee/Getty Images)

Bruce Heyman, who served as United States ambassador to Canada under President Barack Obama, watched Wednesday’s events from Chicago. Maclean’s caught up with him on Wednesday evening to discuss the storming of the U.S. Capitol, what Joe Biden should do about it and what Canadians should take away from the day’s events.

The interview has been edited for length and clarity.

Q: What went through your mind as you watched events unfold at the Capitol today?

A: I was watching the process of the Electoral College affirmation. All of a sudden events started happening very quickly and you’re stunned. You’re just stunned, and you’re just trying to process: “Is this really happening?”

It’s a building I know well, from being tourist to when I worked there as an intern in high school and college. It’s a place where I was confirmed to be U.S. ambassador. It’s a place where I’ve had a number of meetings with leadership. It represents democracy, and I know the view of that building from the Canadian embassy, where your ambassador sits and stares right out at the Capitol.

We’ll get control of the building. It’s not going to be about the building. Offices will be repaired and the unfortunate life lost will be remembered. But this is a shot at our country and our democracy and how we operate. For us, this is a big deal, because people were trying to stop the political process. It was a purposeful act to stop the functioning of the U.S. government in affirming the next president of the United States.

Q: You talk about being stunned, but considering the president’s handling of the election and his rhetoric over the past few weeks, was it surprising to you?

A: Every time that this man has done something, I have mistakenly believed it couldn’t get worse. And every step along the way, he continues to do something that makes it even worse—in his language and his style and his decision-making and his treatment of others. But never in that whole process did I ever think that a president of the United States of America would call out for people to gather in Washington, D.C. and to go storm the Capitol to stop the process of affirming his successor.

READ MORE: A coup attempt is underway in Washington

There are a lot of words being put to that. Sedition. Conspiracy. What he did was so wrong relative to the standards of democracy to which this country has been bound since our founding, that I think we’re going to have to do a lot of reassessment as a nation of how we got to this place and how are we so vulnerable.

Q: Democrats are preparing articles of impeachment. Do you think lawmakers should impugn Trump in the 11th hour of his presidency?

A: As I think about it there are multiple paths that one could take. One path is just go through the days—and there aren’t that many of them—and do what we can do to protect the nation as best we can with the people around [Trump].

Two, we can look at the 25th amendment of the constitution and—with the vice president, the cabinet, the Congress—make the determination he’s unable to act as president any longer and that the vice president becomes the acting president. If you could get that group of people together to do that, that would ensure the smooth transition and handing over of power.

The third would be drawing these articles of impeachment on an expedited basis, holding an expedited trial and getting him impeached.

But there’s some positives and negatives to all three of those. I think the leadership should think about each of those carefully. You try to make sure you don’t make an emotional decision that you regret later. You know the country is divided, and you know there’s a whole group of people that are very upset, [because Trump] has told them the election was stolen. How do you look for a future where we heal that?

Some of these decisions which may make you feel good in the short term may make things more challenging in the longer term.

Q: What can Joe Biden do to repair the country when so many people seem to be so convinced that this election was stolen?

A: Well, I think he has to govern. Now that you have a president whose party will have the House and the Senate, he’s going to be held to a standard of: what are you doing? What kind of president are you?

The first thing he needs to do is start targeting this virus in a professional and strategic way that has not happened the entire time. This is the big, big thing that needs to get tackled right off the bat and—good news; light at the end of the tunnel—we have multiple vaccines that have been approved and multiple more that are soon to be approved.

Once this vaccine distribution is done effectively, hopefully we’ll get to the back end of this pandemic. Hopefully. It may change people’s mental state, too, as opposed to: “You’re a masker and I’m not” and all this politicization of the virus, which is creating the haves and have nots, and exacerbating racial and ethnic divides. Hopefully, once this virus is at least under control, to a degree, we can start healing.

Q: From your experiences with the president-elect, are there particular qualities that you think will serve him well in de-escalating tensions?

A: He’s a compromiser. He’s a listener. He is somebody who understands. He spent so many decades in the Senate working, collaborating, negotiating, across political spectrums. I have seen him, in person, reach across with a hand, with a sense of compromise, to the Republicans directly. And I know that the word compromise shouldn’t be seen as a point of weakness; it should be a point of strength, in the willingness to not be so stiff-necked that your view is the only view.

He’ll listen and he is caring. He has high EQ [emotional intelligence], along with high IQ. The EQ is going to be important at a time when you have a country that’s hurting.

Q: What about the GOP? What do you think needs to happen to rebuild a Republican Party that will prevent another authoritarian-style leader from taking the helm?

A: That’s a great question. You’re seeing the beginnings of how positions are going to be established in a post-Trumpian world. Those Republicans who spoke out against him early on, he forced out of office: “You’re not with me.”

Now in this post-election period we’re seeing positions being staked out. You’ve got a core group of people—a former vice president [Dick Cheney]; a former nominee [Mitt Romney]; a former Senate leader [Mitch McConnell]—who’ve clearly staked out that there’s a better way, that they can’t be hitched to this wagon anymore. Then you have the [Senator Ted] Cruzes and others who will find it very expedient for their own political gain to stay aligned with Donald Trump.

I don’t know where the party shakes out on this. It’s going go have to evolve pretty quickly, because my guess is in just 24 months there’re going to be people raising their hand and running for president. I know what I’m hoping for. But what I’m hoping for doesn’t really matter.

Q: What are you hoping for?

A: I’m hoping for a strong, politically grounded party. I think having a two-party system is valuable and important to a functioning democracy, but one which respects the rule of law, one that respects the constitution and one that respects people and humanity and people that are Black and Hispanic and gay and immigrants and have different religions and different backgrounds. If we have that kind of respect then we can have conversations about size of government, and size of budget, and role of the military or not, and should we be cutting taxes or raising them.

On all of these things—but not about the legitimacy of democracy and the promotion of authoritarian ideology. I think the Trumpian perspective is clearly a danger to the functioning of democracy.

Q: Are you worried he’s going to continue to loom over politics for a long time?

A: Of course I’m worried. Again, it’s going to matter where those folks all align themselves. The more people that are associated with him, the more influence I think he’ll have. He does clearly have tens of millions of followers on social media and he clearly can galvanize a whole bunch of people to rally. And he clearly, today, can tell them to all go storm the Capitol. And that’s a scary thing. It’s a very scary thing.

READ MORE: So when do we start promoting democracy?

Q: What should Canadians and others around the world make of today’s events?

A: I travelled Canada. We wrote a book about the U.S.-Canada relationship. The shock and horror of the way Donald Trump was behaving toward Canada throughout the last four years was broad and extensive and profound. And people were scared over this last year seeing what was happening in the U.S.

I’ve got to believe the Canadians are watching with a combination of sadness and shock. And some fear, because, there’s always been a perspective of the Americans being a little more extreme in many areas than Canadians. This is a little more than a little bit extreme. This is a pretty extreme day. And extreme for the last few weeks. And I think Canadians really want America to do well. You’re our next door neighbour, a big trading partner, we share resources and families, we share families across the border. Of course you want everything to go well in the neighbourhood and the last thing you want in the neighbourhood is an insurrection going on.

Q: How big a hit do you think America’s global image took today?

A: Trump really worked hard to damage our image, year in and year out. This is just a capstone to the damage that he continues to do. But I do believe that many of world leaders and most of the world have already pivoted to Joe.

The problem is, different than many other countries, our transition is a fairly long one—assuming that it was going to be used effectively to transition the government, not this. In Canada, you have an election and, lo and behold, boom: you have a new prime minister, a new cabinet; you go to work. That’s not the way it works, here. But I think people are already positioning themselves for the next administration. And I suspect the thought of many people around the world is: “It can’t come soon enough.”