Tillerson out at State, to be replaced by CIA chief Pompeo

U.S. Secretary of State Rex Tillerson was fired Tuesday morning. Rumours of friction between Trump and Tillerson had circulated for months 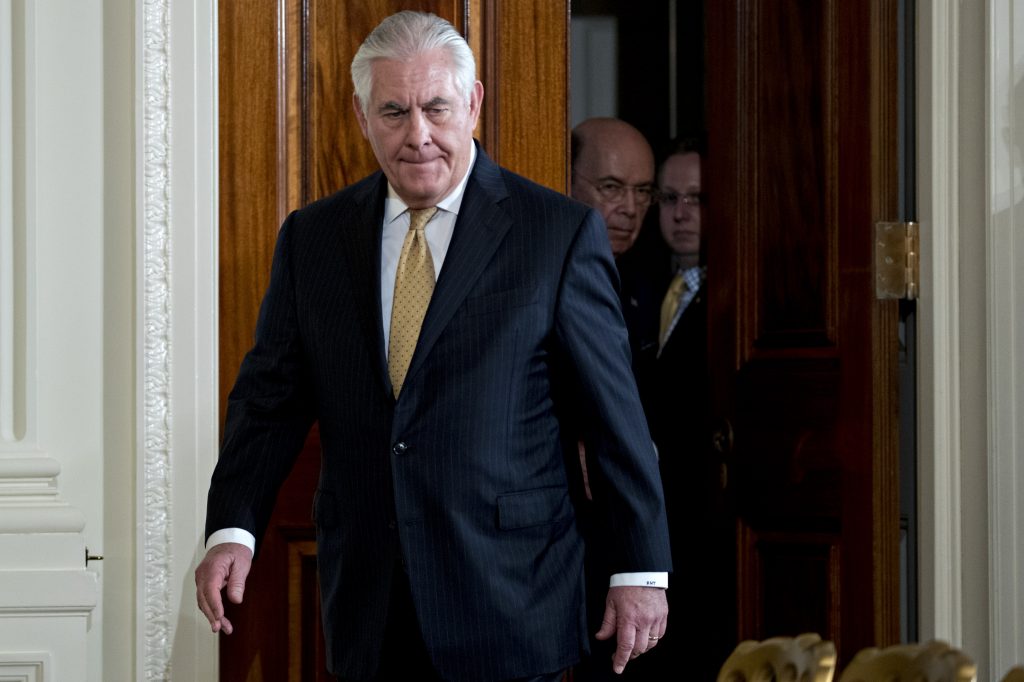 U.S. Secretary of State Rex Tillerson arrives to a news conference with U.S. President Donald Trump and Swedish Prime Minister Stefan Lofven in the East Room of the White House March 6, 2018 in Washington, DC. Trump and Lofven are looking to focus on trade and investment between the two countries and ways to achieve shared defense goals. (Photo by Andrew Harrer-Pool/Getty Images)

WASHINGTON—U.S. President Donald Trump fired Secretary of State Rex Tillerson on Tuesday and said he would nominate CIA Director Mike Pompeo to replace him, in a major staff reshuffle just as Trump dives into high-stakes talks with North Korea.

Trump announced the change in a tweet early Tuesday just four hours after Tillerson returned to Washington from a trip to Africa. Word of Trump’s dissatisfaction with Tillerson and plans to replace him had circulated for months, even as Tillerson insisted he didn’t plan to leave.

Trump said that the CIA’s deputy director, Gina Haspel, would take over for Pompeo at the intelligence agency. If confirmed, Haspel would be the CIA’s first female director.

Rumours about friction between Trump and Tillerson were circulating last year. In October, NBC news reported that Tillerson called the president a “moron,” something Tillerson never actually denied. Tillerson continued to insist his relationship with the president was solid and brushed off rumours of strain between them.

Two officials familiar with the situation said that Tillerson had been fired by Trump on Friday, while in Africa. There were no obvious indications as Tillerson flew home early Tuesday from Nigeria that his departure was imminent, nor that it was his last trip abroad as top diplomat.

But Tillerson had cut short his trip by one night, telling reporters he had been sick in Africa and had barely slept two nights in a row because of urgent, middle-of-the-night matters, including the North Korea announcement.

“I felt like, look, I just need to get back,” Tillerson said.

Dismissing Tillerson had been discussed at multiple levels for a long time, said a senior White House official, adding that the North Korea overture and invitation brought more urgency to the decision. Two officials said Trump wanted to have a new team in place ahead of an upcoming meeting with North Korean leader Kim Jong Un as well as trade talks.

The officials weren’t authorized to speak publicly and demanded anonymity.

Tillerson also was known for his Russia connections and would be Trump’s most concrete outreach yet to Russian President Vladimir Putin.

Trump’s announcement came the day after the Republican-controlled House Intelligence committee announced it found no collusion between Trump’s presidential campaign and Russia.

Tillerson was slated to retire from Exxon in March 2017 at age 65 under the company’s mandatory retirement policy. Paid $27.3 million (U.S.) last year, Tillerson has accumulated roughly $160 million in Exxon stock along with $149 million of unvested stock options, according a proxy statement the company filed with the Securities and Exchange Commission.