Allen Abel in Washington: On the South Lawn, the president doubled down on his racist taunts as Democrats seethed and Republicans went mute 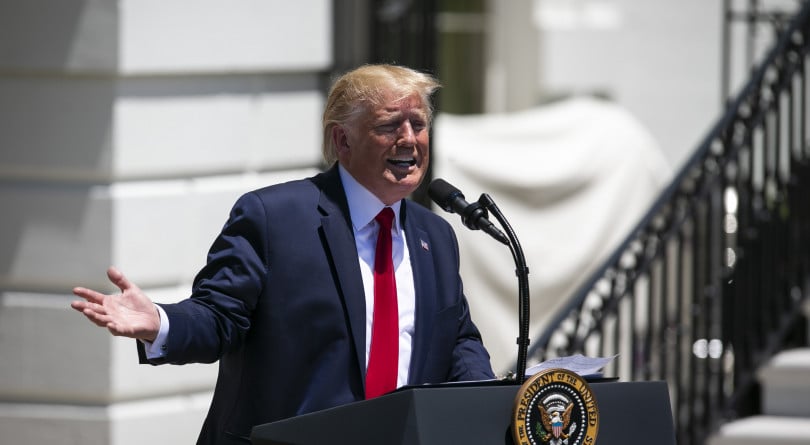 Trump speaks during a Made in America products showcase on the South Lawn of the White House in Washington on July 15, 2019 (Al Drago/Bloomberg via Getty Images)

Telling foreigners to go back where they came from is as American as pulled pork, high-school football and the Ku Klux Klan, and as old as the republic itself. As far back as 1783, barely two years after the British surrendered to George Washington, the Freemen of the City and Liberties of Philadelphia were voting to “mutually pledge ourselves to expel, with infamy … those degenerate and apostate sons of America who hold principles incompatible with our republican government” and recommended that they be sent to “the new-erected town of refugees in Nova Scotia.”

Eight decades later, President Abraham Lincoln was suggesting in his December 1861 Message to Congress that both free and enslaved African-Americans be shipped, at government expense, to the newly-minted enclave of Liberia in West Africa, and noting that “If it be said that the only legitimate object of acquiring territory is to furnish homes for white men, this measure effects that object; for the emigration of colored men leaves additional room for white men remaining or coming here.”

So it was hardly revolutionary over the weekend to hear Donald Trump call for four far-left, first-term Democratic members of Congress to “go back and help fix the totally broken and crime infested places from which they came,” even though three of the four were born in the United States and the fourth is a naturalized U.S. citizen, a blessing she shares with two-thirds of Trump’s wives and his current Slovenian in-house in-laws.

“They hate America,” the president doubled down on Monday, steamily addressing a stunned but mostly appreciative gathering of domestic manufacturers on the South Lawn, seething by name at Rep. Ilhan Omar of Minnesota, and alleging without substantiation that the Somali-born refugee was wont to “hold her chest out” with pride at the depravities of al-Qaeda while spewing nothing but contempt for the Land of 10,000 Lakes and its conterminous sister states.

“If you’re not happy here, then you can leave,” Trump said of Omar and, by extension, Reps. Rashida Tlaib of Michigan, Ayannah Pressley of Massachusetts, and Alexandria Ocasio-Cortez, the native-born acetylene torch whose riding includes parts of the president’s personal borough of Queens and the Trump-branded golf course in the Bronx that was built atop a former garbage dump and that once was labelled by the New York Daily News as a “$230-million sand trap for taxpayers.”

“Where should they go?” reporters plaintively pressed from behind the ropes, but the president paid no heed.

“As far as I’m concerned, if you hate our country, if you’re not happy here you can leave,” Trump persisted, echoing the long-dead Freemen of Philadelphia. “That’s what I say all the time. That’s what I said in a tweet that I guess some people think is controversial. A lot of people love it, by the way. A lot of people love it. But if you’re not happy in the U.S., if you’re complaining all the time, very simply you can leave. You can leave right now. You can come back if you want, don’t come back, that’s OK, too.”

“When @realDonaldTrump tells four American Congresswomen to go back to their countries, he reaffirms his plan to ‘Make America Great Again’ has always been about making America white again,” responded Speaker Nancy Pelosi. On cue, Trump spat back that Pelosi’s tweet was itself “racist,” and trumpeted the six million jobs that have been added since his election and the record-low unemployment rate among African-Americans and other minorities, a statistic that can partially be explained by the fact that so many of them have been elected to Congress to impeach him.

“When will the Radical Left Congresswomen apologize to our Country, the people of Israel and even to the Office of the President, for the foul language they have used, and the terrible things they have said,” Trump tweeted. “So many people are angry at them & their horrible & disgusting actions!”

What the president was happy with on Monday was the Dow Jones Industrial Average and such non-imports as the Airstream travel trailer, irrigation pipes, and mountain bicycles arrayed on the executive fescue, plus a couple of cabin cruisers that, while beyond the reach of the vast majority of Americans, were mere rubber duckies compared to the $100-million, 281-foot Trump Princess (on-board heliport, cinema, discotheque, and medical clinic) that Trump lost to creditors in 1991 during one of the King of Debt’s periodic illiquid periods.

Also on display on the South Lawn was a Thermal High-Altitude Area Defense (THAAD) anti-ballistic missile system camouflaged in desert tan and equipped with one rocket that appeared to be aimed at Barack Obama’s residence two miles northwest of the White House. Although Trump did enter the Airstream and climb aboard one of the motorboats, he was not seen to mount the THAAD and ask “What does this button do?”

While Democrats seethed in rare unison at Trump’s imprecations on Monday, most Republicans were as mute as the late Lincoln. They were exemplified by Sen. Lindsey Graham, the inalienable presidential golf partner, who went on FOX News to wanly advise the president (if not the THAAD) to “aim higher” while defaming Reps. Ocasio-Cortez, Omar, at alia as “a bunch of communists.”

“Republicans with a conscience are cringing,” reported POLITICO, quoting a “Trump ally.”

“Here we go with the Fake Polls,” tweeted Donald Trump.