In the city that's home to both Donald Trump and Hillary Clinton, politics is thick in the air on the eve of the election 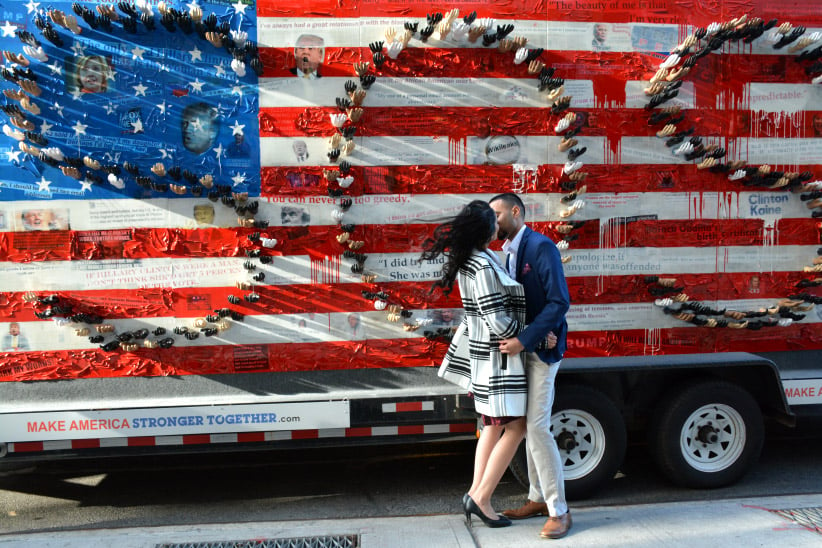 A newlywed couple kisses in front of a float created by artist David Datuna in New York City. (Photograph by Meagan Campbell)

On Sunday morning in Manhattan, church begins with an election prayer. Parishioners close their eyes, tuck their chins and lace their knuckles in laps. “We ask that your spirit will move within our nation following Tuesday,” says Minister Michael Brown of the Marble Collegiate Church, where Donald Trump attended Sunday School as a child. “And we pray that at all levels of government, once individuals are elected, you will work the miracle of transformation, moulding them into persons even they didn’t dream they could become.”

Leading up to decision day, politics has gusted into every nook of New York City, where on Tuesday night Trump and Hillary Clinton will deliver their victory and/or concession remarks. It blares from jumbotrons outside the Rockefeller Center; it’s written on signs aimed at marathon runners; it cloaks people’s minds and backdrops their wedding photos, and at the Marble Collegiate Church, it enters parishioners’ blessings. “I know that our country will choose the best candidate,” says churchgoer Vera Lilly after mass. “It’s all part of the divine plan … I do believe things will get better, so you have that to look forward to.” 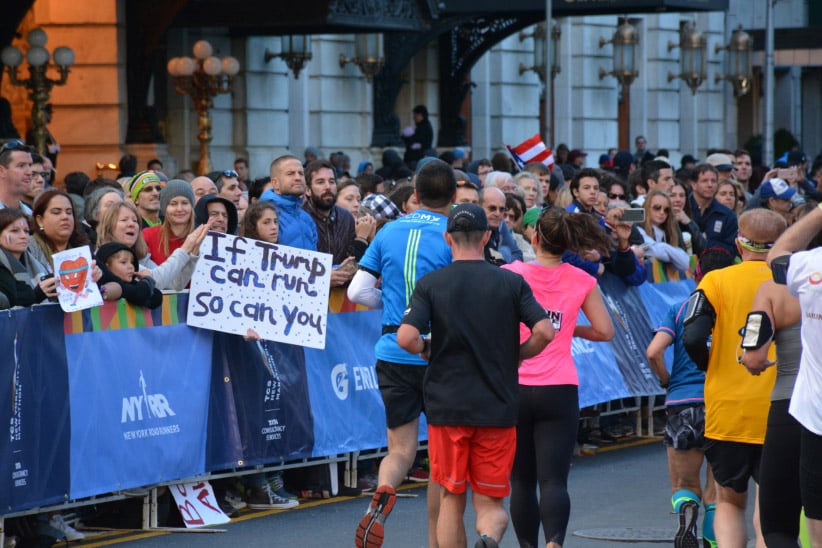 A fan holds a sign at the New York City Marathon. (Photograph by Meagan Campbell)

Thirty blocks north, nearly 50,000 runners are finishing the New York City Marathon in Central Park. “If Trump can run, so can you,” reads the sign of one fan along the route. Runners recall seeing other election-themed encouragement: “run like you’re running from the Trump bus,” and “nasty women run marathons” (a play on Trump’s comment in Las Vegas in October about Hillary Clinton being a “such a nasty woman”).

While the foot race breaks records, with a 20-year-old man becoming the marathon’s youngest winner ever, politics is breaking in the news, which airs on a jumbotron erected by NBC News at the Rockefeller Center, temporarily branded as “Democracy Plaza.” Fox News airs on screens at its own office nearby, calling itself the “2016 Election Headquarters.” In between these competing outdoor theatres, a gutter is grimed with campaign pamphlets and buttons; even litter in New York is political.

“Hillary for prison,” reads a man’s t-shirt outside the Trump Tower, where the candidate lives. Next to him, a self-proclaimed cowboy strums his guitar wearing nothing but “Trump”-decorated underwear (the temperature was 10 degrees Celcius). Parked in front of the supporters, a float created by artist David Datuna denounces both candidates with an “SOS.” The artwork becomes the backdrop for a newlywed couple on a photoshoot, while the driver of the float explains, “we went to Washington, and we had people giving us the finger and people giving us the thumbs up. I’m used to driving around stuff like this—awnings, fluorescent lights. I’ll keep driving it around until [police officers] chase me out.” 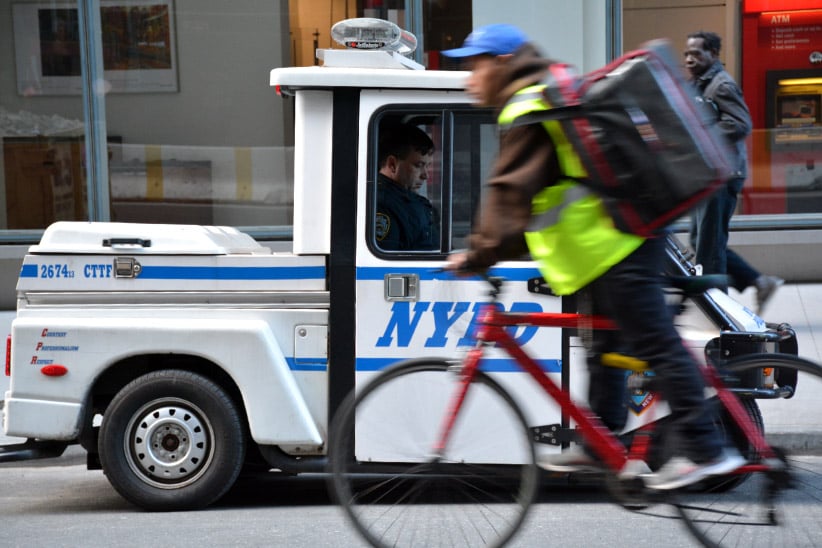 A police officer waits in his vehicle in Manhattan. (Photograph by Meagan Campbell)

Police, like politics, are everywhere. The New York Police Department is “watching carefully” due to an ambiguous bomb threat for Monday, Mayor Bill de Blasio explained on Friday on the radio station WNYC. Bordering the marathon, clustering in front of buildings, officers are in vehicles, on horses, in Starbucks.

Along with cloaking the cityscape, politics permeates minds, of each New Yorker uniquely. “Most of my life I was 350 lbs,” says 32-year-old Russ Lane. “Most of the world had written me off … Now I’ve lost 200 [pounds] of that. It taught me I had power I never thought I had.” Lane was long apathetic about politics but is now urging friends and family members to vote. “If you don’t like something, you do something about it,” he says, a lesson he learned in weight loss. “I’m beginning to flex that politically.”

MORE: America’s perfect voters put their streak on the line

First year university student Alexandra Fischer links politics to her degree in history. “Back in the beginning of our nation, there weren’t a lot of rules set up for elections, so people were mudslinging left and right,” she says. “But today we have nuclear weapons. There’s no fooling around here.” Fischer will return home to Long Island on Tuesday to vote for the first time, for Clinton.

The state of New York has voted Democrat since 1984, and Clinton holds a 17-point lead according to a Siena College poll released Sunday. Even the Marble Collegiate Church, where Trump’s parents attended and where Trump met his first wife, released a statement last year distancing itself from the candidate, saying he was not an “active member” of the church.

Despite the predictability of New York’s vote, parishioners at Marble Collegiate will hold a 24-hour election vigil beginning Monday at 10pm. They will pray for “unity, safety and respect for each other,” each in 30-minute intervals, throughout the night. Indeed, in New York right now, politics is the subject that never sleeps.