Trump Daily: Will the president-elect 'drain the swamp'?

Our daily roundup of this day in the Donald Trump era, from a 60 Minutes interview to a Russia reachout 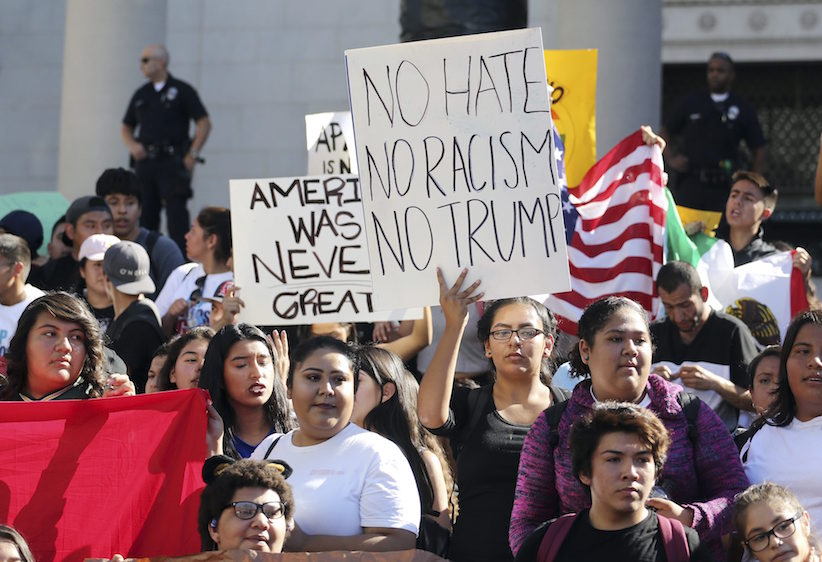 Students from several high schools rally after walking out of classes to protest the election of Donald Trump as president in downtown Los Angeles Monday, Nov. 14, 2016. More than a thousand students from several schools on Los Angeles‚Äô heavily Hispanic east side marched out of classes shortly after they began in a protest they say was organized over the weekend. (AP Photo/Reed Saxon)

Nov. 14, 2016: As Donald Trump starts naming his advisors, there’s been no shortage of criticism from even his own supporters for his selections—and, on the flip side, for his seeming hedging on his campaign claim he’d “drain the swamp.” Meanwhile, repealing Obamacare may come sooner than anyone anticipated.

On the Bannon Wagon

In naming two of his top advisers, Trump is already getting a lot of flack for both picks—for two very different reasons.

His new chief of staff will be Reince Priebus, the Republican Party chairman, who stuck firmly by Trump throughout many scandals that could have potentially embarrassed the party for many future elections. While the appointment of Priebus was largely applauded by Republican inner circles—garnering praise from both House Speaker Paul Ryan and “Never Trump” Ohio Sen. Lindsey Graham—the selection irked many in Trump’s base who thought the president-elect was going to “drain the swamp” of Washington insiders.

Meanwhile, Trump tapped his campaign CEO (and chairman of the alt-right Breitbart) to become his “chief strategist and senior counsellor”—a selection which was quickly lauded by the Ku Klux Klan and staunchly opposed by the Anti-Defamation League.

As a former adviser to Republican senators John Kasich and John McCain put it on Twitter: “The racist, fascist, extreme right is represented footsteps from the Oval Office. Be very vigilant America.”

The racist, fascist extreme right is represented footsteps from the Oval Office. Be very vigilant America.

In an interview with 60 Minutes broadcast on Sunday, Trump said that he’s “fine with” same-sex marriage and that cases have already been settled at the Supreme Court level. It suggested that he may not be immediately poised to fill the late Antonin Scalia’s vacant Supreme Court chair with a judge who would overturn the laws in the country.

As for abortion rights, with a four-four split among current Supreme Court justices, Trump let it be known it’s possible he’ll appoint an anti-abortion rights justice, meaning Roe v. Wade could well be overturned. If that were to pass, the abortion laws would be decided at the state level—and if a woman is seeking an abortion in a state that doesn’t allow it, Trump acknowledged “they’ll have to go to another state.”

By now, most Americans have seen the harassment of minorities in the aftermath of Trump’s election win: school kids chanting “build the wall” around Hispanics in the hallways, graffiti telling African-Americans “Black Lives Don’t Matter,” Muslim women having their hijabs pulled at in public.

In that 60 Minutes interview, president-elect Trump had a simple message for those spreading hate: “Stop it,” he said. “If it helps, I will say this, and I will say right to the cameras: Stop it.”

Meanwhile, on Twitter, Trump’s favourite form of communication with his followers, his message to “stop it” has been noticeably absent.

How fast can Trump “repeal and replace Obamacare,” as he emphasized as one of his main platforms during the campaign trail? The repeal could come as soon as inauguration day, Jan. 20, 2017, according to his campaign managers. Kellyanne Conway told Fox News that Trump is looking to get a “special session” of Congress ready for the same day he is sworn in.

As for the “replace” part of that plan, it seems that date is still to be determined—which could pose some problems for millions of Americans. “Now that Republicans are in charge, they gotta take a look at how the law is saving the government money and benefiting millions of people—both the 20 million covered directly by the law and millions more who receive insurance through employers,” President Barack Obama said at a press conference Monday. “If they can come up with something better that actually works, a year or two after they’ve replaced the Affordable Care Act with their own plan, and 25 million people have health insurance and it’s cheaper and better and running smoothly, I’ll be the first one to say that’s great.”

But if there’s a big gap in time between the repeal and the replace components, things could get chaotic.

Reaching out to Russia

Trump’s relationship with Russian President Vladimir Putin has evolved significantly. Before he announced his candidacy for U.S. president, he insisted that he had never met Putin. But on Monday, Trump and Putin spoke over the phone.

And now Trump can definitely say he’s spoken with Putin.