Trump fires Comey: There is no road map from here

The FBI director was the best hope Trump's ties to Russia would be investigated. American democracy has been dealt a body blow. 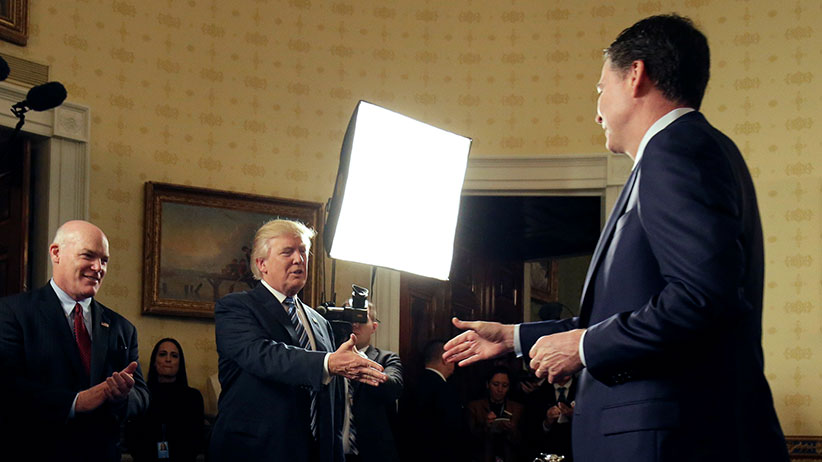 The President of the United States just fired the man who was investigating him for colluding with the Russian government. This was allegedly done on the advice of his attorney general, who was forced to recuse himself from the same investigation after he lied under oath about his own contacts with the Kremlin. Without any hesitation, Republican politicians reacted by immediately choosing party over country and defending the shock decision.

The timing of the firing of FBI Director James Comey was extraordinary. It came just six days after he had testified to the Senate about the bureau’s ongoing investigation into ties between the Trump campaign and the Russian government, and the extent to which the Kremlin interfered in the U.S. election. And it was less than 24 hours after Sally Yates, the former acting attorney general who Trump fired for ruling his visa ban was unconstitutional, testified about her attempts to warn the president that his inner circle of advisors had been compromised by Moscow.

The administration is claiming Comey was fired because of the way he had mishandled the investigation into Hillary Clinton’s email server last year. Let’s be very clear that this is utter nonsense. Trump has repeatedly praised Comey for that very thing, and understandably so. A recent in-depth analysis by the polling site FiveThirtyEight found that the infamous “Comey Letter” most likely gave Trump the White House. If Trump was truly concerned about Comey’s capabilities, he would not have chosen to keep him as FBI director.

And, as often happens, Trump’s own words undermine his case. The letter he sent Comey contains an extraordinary paragraph where he states, “While I greatly appreciate you informing me, on three separate occasions, that I am not under investigation, I nevertheless concur with the judgment of the Department of Justice that you are not able to effectively lead the Bureau.” That “nevertheless” makes it clear that Trump believed the existence of an investigation was reasonable cause for dismissal.

The Constitution of the United States gives the president the authority to fire the director of the FBI. But the mere existence of that power is not a justification for using it. Democratic norms forbid a politician from interfering in an investigation of which they are the subject. Sadly, Republican leaders do not see it that way. On learning of the firing, they mostly shrugged and said it was the president’s prerogative.

The continued support from Republican politicians is increasingly hard to explain. Day by day, Trump behaves in ways they would have called treasonous just a few short months ago. Their desire to protect the GOP’s legislative agenda is often cited as the primary reason they endure Trump’s presence in the White House. But if he were forced out, the conservative vice-president would likely be even more supportive of, and useful to, Republicans on the Hill. And Trump’s record low approval ratings make the 2018 mid-term elections even more dangerous for Republicans. It is possible their continued loyalty to the president has a limit, and while no single politician wants to be the first to truly break ranks, when it begins, the retreat will be fast and complete. In fact, following the announcement of Comey’s dismissal, some Republican leaders are publicly questioning the decision and even floating the idea of a special prosecutor.

What happens next? There is no road map from here. Even Richard Nixon did not fire the director of the FBI. There is every indication that Trump’s campaign was compromised by the Russian government, and that some level of collusion took place. If this is true, it would be the single largest political scandal in modern American history. And James Comey was the best hope that this would be properly investigated. It is highly unlikely that Trump will select a replacement who is eager to continue that investigation. Republican leaders have proven their willingness to overlook his transgressions almost daily. This could simply be just another body blow to the American democratic system, with worse still to come.

But it is also possible that this could be the final outrage that drives Republicans to break ranks. Or, this could energize the opposition back to the streets, with even larger protests than we saw in January. The Trump White House could suddenly find itself without allies, cornered by its own lies, out of options, and then out of office.

By firing Comey, Trump has created a political singularity—a moment that contains so many possibilities we cannot see, or possibly even imagine, what comes next.