Trump is facing his new reality—and she's holding a hammer

Allen Abel: The Democratic women of the 116th Congress are already a force to be reckoned with. But are they a force to banish Trump? 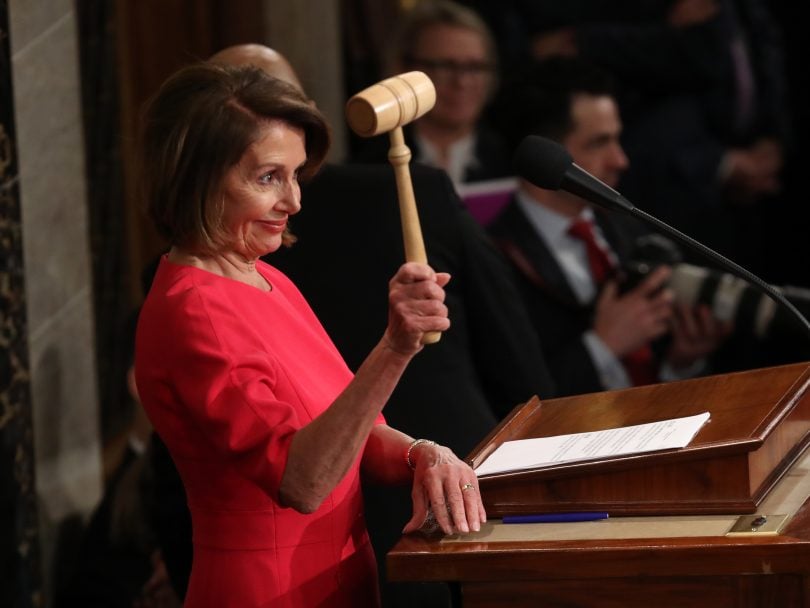 Pelosi, back as Speaker of the House, at the first session of the 116th Congress (Photo by Win McNamee/Getty Images)

The revolutionary came barreling down the hallway in a tailored suit of suffragette white. Her personal documentary crew was scurrying in her backdraft and—at the entrance to her undecorated office on Capitol Hill—dozens of citizens were queuing for selfies beside the shiny bronze plaque that read REPRESENTATIVE ALEXANDRIA OCASIO-CORTEZ.

“She can be the wind behind our sails,” sighed a young man named Darius from the Upper East Side of the Greatest City on Earth.

It was the opening morning of the 116th Congress of the United States and the 13th day of the U.S. government shutdown. Outside the Capitol, uncollected garbage was rotting in the cans. Inside, the marble mausoleum was throbbing with the mad optimism of the ingénues and sobbing with babies-in-arms. So inverted was the topography of the Age of Trump that Congress was open but Yellowstone Park was closed. Ninety per cent of the American electorate probably would prefer it be the other way around.

Dozens of new members of the House of Representatives were being sworn and seated, their very names pealing the bell of existential change: on one side, a Mike, a Mark, a Greg, another Greg, Ross, Ben, Guy, and Chip; on the other, Sharice, Ayanna, Jahana, Ilha, Xochitl, Rashida, and Deb. 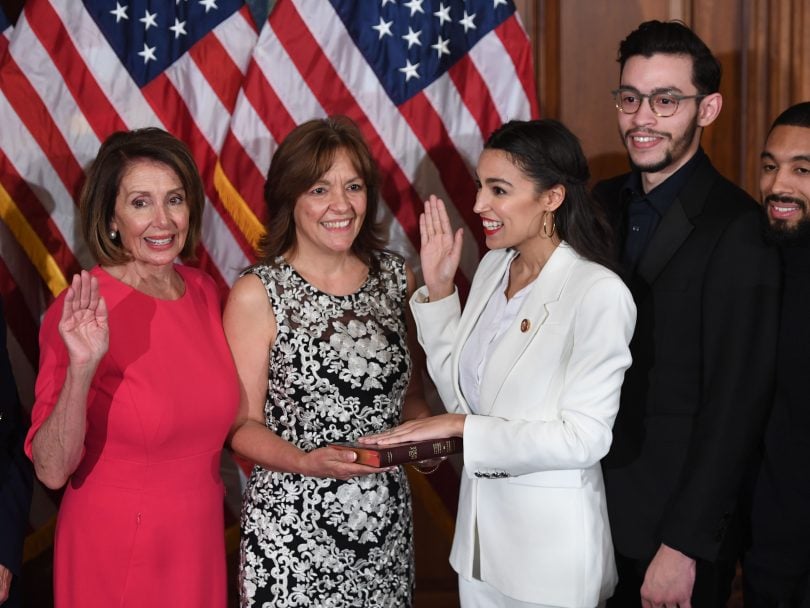 And Alexandria. She was, of course, the 29-year-old former waitress from the highrises of the Bronx, New York, the self-described democratic socialist (and youngest member of Congress ever elected) who had sent packing a long-term Irish machine pol in one of the great upsets of these jabberwocky times. Ten-per cent voter turnout; the young woman’s risible lack of experience in international affairs; the cancerous right-wing web sites that defame her as the Breakfast Club-dancing harlot of godless communism; her pipe-dream platform of licit marijuana, guaranteed employment for everyone, free university, single-payer health insurance, and 100-per cent renewable energy—none of this mattered now.

In 20-odd months, Ocasio, and the other 434 members, will have to do it all over again—the promising, the posturing, the panhandling for ballots and bucks. But for now, she and the others were the victors, and to the victors belonged democracy despoiled—and the sudden power to drag the president through these chambers, to grab Donald Trump by the halls.

“We’re no utopists,” wrote Vladimir Lenin in 1917, predicting the 116th Congress with its Muslims and its #MeToo marchers and its Moms. “We know that an unskilled laborer or a cook cannot immediately get on with the job of state administration. … But we demand immediate breakup with the preconception that governing the state, carrying on the mundane everyday work of governing is possible only for those civil officers who are rich or come from rich families.”

At the dawn of the new legislature, it was an hour for idealism unpolluted by reality, for young people in T-shirts that said #MEDICARE FOR ALL to burst into the erstwhile bar server’s sanctum and gawk at the empty bookcases and the possibilities that shimmer all around you when you are under 30 and rebellious and shook.

So Alexandria Ocasio-Cortez came out of her office and told us that this new freshman class—these Democrats who look so much like the people of their cities and their country than any Congress ever has—“don’t lack for skills, we don’t lack for experience, but what our country needs is political courage.

“But I think that having the wind behind our backs, having so many people calling our offices and saying ‘Stand up. Don’t fold. Stick up for our values,’ that’s something that creates courage, and courage begets more courage.”

Older heads waxed wiser, though these were faint breaths on this boisterous day.

“Everyone is changed by this place,” an 84-year-old former U.S. Senator was saying just outside Ocasio-Cortez’s undecorated suite. It was Carl Levin, the Michigander who served 36 years in the Senate and who had come to witness the swearing-in of his nephew Andy. Dynastism is a commonplace here; expect another generation or two of Ocasios before the clan is through, should she someday have a daughter or a son.

“What is she about to discover?” a reporter wondered of the aged solon, pointing toward the new child’s door.

RELATED: The rise of the radical left in America’s Democratic Party

“Everyone can’t get their own agenda adopted,” Carl Levin answered. “The president is learning that, too.”

Now the whole shambles ambled into the House’s storied cavern and elected the first female Speaker to be the second as well. Beaming and baby-kissing in carnation red, Nancy Pelosi—a mayor’s daughter and millionaire’s wife; no Ocasio she—resumed the throne as if she never had departed, as if the Tea Party and John Boehner and Paul Ryan and three consecutive Republican blowouts never had happened at all.

Even Alexandria Ocasio-Cortez voted for Nancy Pelosi, and when this happened, a correspondent in the gallery could hear a few sarcastic boos from the white men on the Republican side.

On television in the White House, Donald Trump could watch these two women in their moments of ascent—the 29-year-old representing 700,000 people, nearly all of them the children of immigrants or the descendants of slaves; the 78-year old brandishing the gavel that will hammer down his impeachment, should it come to that.

(Off-camera, an eyewitness on Thursday morning could look down from the balcony and see the Tweedledum figure of Jerrold Nadler, Democrat of the Upper West Side and now the chair of the Committee on the Judiciary that will decide the fate of Donald Trump; a wide man in a wide tie, pacing the House floor with his hands in his pockets, literally jingling change.)

RELATED: ‘Halfway Trump’ is now America’s sorry condition. Will it get worse?

What will happen next—the re-opening of all the Yellowstones, the erection of the wall on the Mexican border—rest with the once-and-present Speaker, and with the waitresses and wonder-women who now sit at her feet.

“Their votes were courageous,” Alexandria Ocasio-Cortez said of the ordinary New Yorkers who sent her to Washington. Yet to come is her chance to vote with her speaker to banish Donald Trump back the other way.