Scott Gilmore: Now unconstrained by information, ideology or staff, Trump is unpredictable—and it will have two dangerous implications 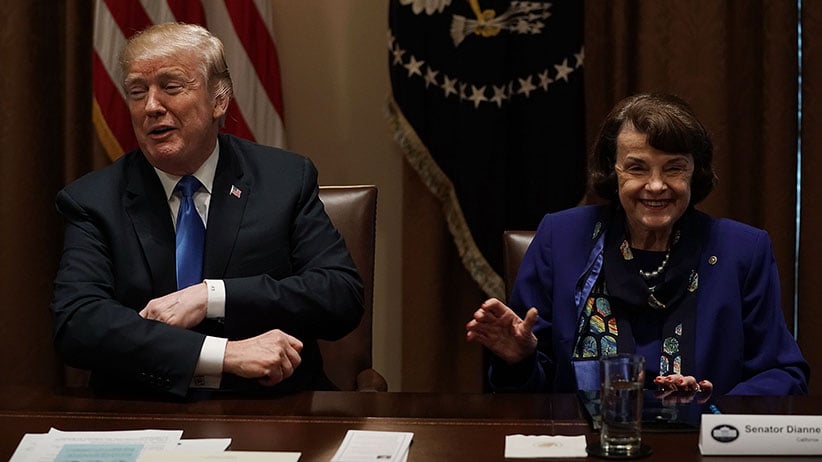 U.S. President Donald Trump and Sen. Dianne Feinstein share a moment during a meeting with bipartisan members of the Congress at the Cabinet Room of the White House Feb. 28, 2018 in Washington, D.C. (Photo by Alex Wong/Getty Images)

The day Donald Trump was inaugurated, everyone knew exactly where he was going. His triumphant supporters cheered knowing he would be deporting Muslims, killing trade agreements, ending Obamacare and abandoning NATO. His terrified opponents were equally confident that was exactly where Trump would be taking the nation.

Each side saw the new president as uniquely uninhibited by the political norms that had constrained his predecessors. From the moment he descended his gold escalator to announce his candidacy, to the moment he ascended the White House steps 19 months later, Trump had been unequivocal. He was going to Make America Great Again. He was going to implement his agenda immediately. And nothing could stop him.

Doubts began to emerge quickly, however. The president’s first 100 days in office, despite his boasts to the contrary, were plodding and largely ineffectual. There was an attempt to ban visitors from a list of Muslim countries, but ineptitude and the constitution stopped that. He tried to repeal Obamacare, but even though Republicans control both houses of Congress, that failed too. Appointments were not made, offices were left unstaffed, and the legislative agenda needed to implement his platform was stillborn.

As the momentum of the new Trump administration began to fail, he also started to lose core staff at an incredible rate. The people responsible for his platform, who kept him focused during his campaign, and who were charged with implementing his policies left one after another. Paul Manafort was gone before inauguration; Michael Flynn was forced out right afterwards. Reince Priebus quit, then Steve Bannon was fired.

These men had kept Trump on rails, steaming towards his policy goals. As they left, the real Trump was gradually unleashed, the pre-campaign businessman from Queens who was poorly informed, politically flexible and completely devoid of an idealogical belief system. Not surprisingly, this Trump began to deviate farther and farther from the path that was feared and cheered on inauguration day.

No longer encumbered by those with hard partisan beliefs and specific policy goals, Trump reverted to his natural state: the crowd pleaser. There are three characteristics that drive Trump: his unwavering faith in his own genius, his desperate need of approval, and his deft ability to read a room. Combined, these traits have turned him into a wobbling wind-up toy, marching back and forth and in circles, directionless and unpredictable.

After a year in office, we have seen this again and again, and on at least two occasions it has been televised live. For example, the president is faced with a pressing political issue like immigration. During his campaign, he unequivocally made it clear that he would do something specific, cancel the DACA program for example. But due to partisan gridlock, or legal limitations, this has been blocked. So he calls a meeting of legislators and invites in the cameras to record his inspirational leadership abilities.

But the president has not read any of the briefing books, and without Bannon to whisper in his ear, does not even remember what he has promised in the past. So he holds forth in the meeting, contradicting his party, his own prior statements and often the facts themselves. The Republicans in the room steer him back towards his platform, but the Democrats propose something they say will be supported by the public. He senses they’re right, and makes an impromptu announcement that he now supports this entirely new plan to the visible dismay of his colleagues.

The same pattern has been repeated so often it is hard to keep track. After the Parkland shooting he promised to protect gun rights before proposing in the midst of a televised meeting that he would just confiscate firearms and worry about due process later. The National Rifle Association, which spent $30 million helping to get him elected, fainted.

Unconstrained by information, ideology, staff or his party, Trump is now the Magic 8 Ball president. No one can predict what he will do next. A missile strike against North Korea is just as likely as a sudden peace deal. Steel tariffs can come and go in the same day. White House officials openly admit they have no idea what he will announce next, or what promise he will abandon.

There are two important implications of this. First, a mercurial president constantly making random decisions effectively incapacitates the White House. If he is for gun control one day and against it the next, it is impossible for him to apply the sustained political pressure needed to implement any policy decision. Nothing will get done. Second, this means his support from the Republican Party may erode rapidly.

Until recently, the GOP has been willing to back Trump against almost every accusation and threat. He might be an unethical bastard, but he was their bastard. If he can no longer be counted on to even support gun rights, then the calculus changes, and the odds of impeachment increase exponentially.