By Ken Thomas and Julie Pace, The Associated Press November 15, 2016 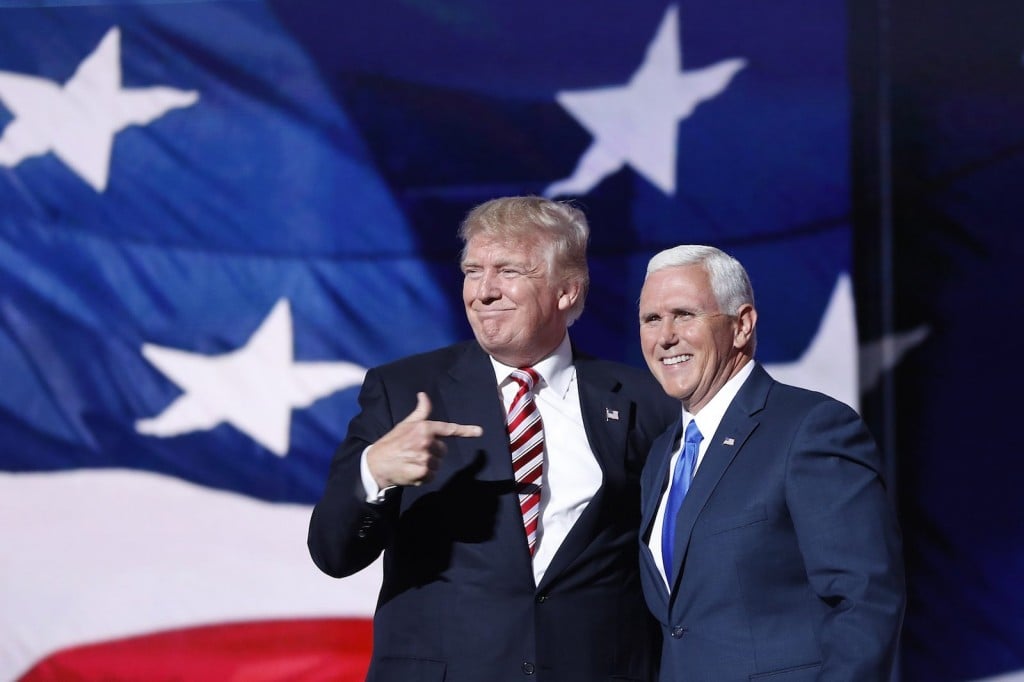 NEW YORK – Hidden from the public in his Manhattan high-rise, Donald Trump huddled Tuesday with Vice-President-elect Mike Pence as he tried to fill out key posts in his Cabinet. But the transition team appeared to be straining under the enormous challenge of setting up a new administration.

Trump himself broke with protocol Tuesday night by leaving Trump Tower without his press contingent. The transition team had told reporters and photographers there would be no movement by the president-elect for the rest of the day and night, but less than two hours later a presidential-style motorcade rolled out of the building, suggesting that Trump was on the move and leaving reporters scrambling.

With no public statements from Trump on the transition itself, his allies engaged in an unusual round of public speculation about his potential appointments – including their own futures – as the president-elect and his aides weighed the nation’s top national security posts.

Former New York Mayor Rudy Giuliani seemed to be angling for secretary of state. But Trump’s transition team was reviewing Giuliani’s paid consulting work for foreign governments, which could delay a nomination or bump Giuliani to a different position, according to a person briefed on the matter but not authorized to speak publicly about it.

Giuliani founded his own firm, Giuliani Partners, in 2001, and helped businesses on behalf of foreign governments, including Qatar, Saudi Arabia and Venezuela. He also advised TransCanada, which sought to build the controversial Keystone XL pipeline, and helped the maker of the painkiller drug OxyContin settle a dispute with the Drug Enforcement Administration.

Related: What happens to the lawsuits involving a president?

A Trump official said John Bolton, a former U.S. ambassador to the United Nations, remained in contention for secretary of state. Bolton has years of foreign policy experience, but he has raised eyebrows with some of his hawkish stances, including a 2015 New York Times op-ed in which he advocated bombing Iran to halt the country’s nuclear program.

Businessman Carl Icahn disclosed on Twitter, based on conversations with the president-elect, that Trump was considering Steve Mnuchin, a former Goldman Sachs banker, and Wilbur Ross, a billionaire investor, to lead the Treasury and Commerce departments.

Pence, now running the transition team, ignored questions from reporters both as he entered Trump Tower, a thick binder tucked under his arm, and as he left six hours later. He took over from New Jersey Gov. Chris Christie, who spent months running transition operations before his demotion last week.

The switch has slowed Trump’s ability to co-ordinate with the White House. Pence has yet to sign a memorandum of understanding facilitating interactions between his team and Obama administration officials. Christie had signed the document, but Pence’s promotion makes it invalid.

A person familiar with the transition efforts said different factions in Trump’s team “are fighting for power.”

Indeed, Trump effectively created two power centres in his White House even before taking office. He named Republican National Committee Chairman Reince Priebus as his chief of staff and flame-throwing media mogul Steve Bannon as his chief strategist, but called them “equal partners.” Trump’s son-in-law Jared Kushner is also deeply involved in the transition, creating another layer of uncertainty about who is making decisions.

“That organization right now is not designed to work,” according to the person close to the efforts, who like others involved in the transition, insisted on anonymity because they were not authorized to publicly discuss the internal process.

Former GOP national security official Eliot Cohen blasted Trump’s team on Twitter, calling them “angry, arrogant.” Cohen opposed Trump during the campaign, but in recent days, he said those who feel duty-bound to work in a Trump administration should do so. But he said Tuesday that after an exchange with Trump’s team, he had “changed my recommendation.”

Meanwhile, Trump made time to call New Zealand Prime Minister John Key to pass on his sympathies for the powerful earthquake there that killed two people. In the call, which was announced not by Trump’s office but by Key’s, the two also discussed New Zealand’s economy and trade issues.

With Trump’s team divided, emboldened Republicans on Capitol Hill moved forward with a united front. House Speaker Paul Ryan, a lukewarm Trump supporter during the campaign, unanimously won his GOP colleagues’ votes for another term at the helm of the House. He told fellow Republicans he had Trump’s support, and heralded “the dawn of a new, unified Republican government.”

Democrats, reeling from sweeping defeats in the election, focused their ire on Bannon, a man celebrated by the white nationalist movement.

“If Trump is serious about seeking unity, the first thing he should do is rescind his appointment of Steve Bannon,” Senate Minority Leader Harry Reid said. “As long as a champion of racial division is a step away from the Oval Office, it would be impossible to take Trump’s efforts to heal the nation seriously.”

Trump’s team has defended Bannon and tried to put its focus on filling the top national security jobs. Trump’s selections will be the first signals to anxious international allies about the direction he plans to take U.S. foreign policy.

Alabama Sen. Jeff Sessions, a loyal Trump ally and immigration hard-liner, is said to be a contender for defence secretary.

Trump also is considering Richard Grenell as U.S. ambassador to the United Nations, which would bring some experience and diversity to his nascent administration. Grenell, who served as U.S. spokesman at the U.N. under President George W. Bush, would be the first openly gay person to fill a Cabinet-level foreign policy post.