Trump in unusually calm debate: 'We're all in this together'

'So far, I can't believe how civil it's been up here' 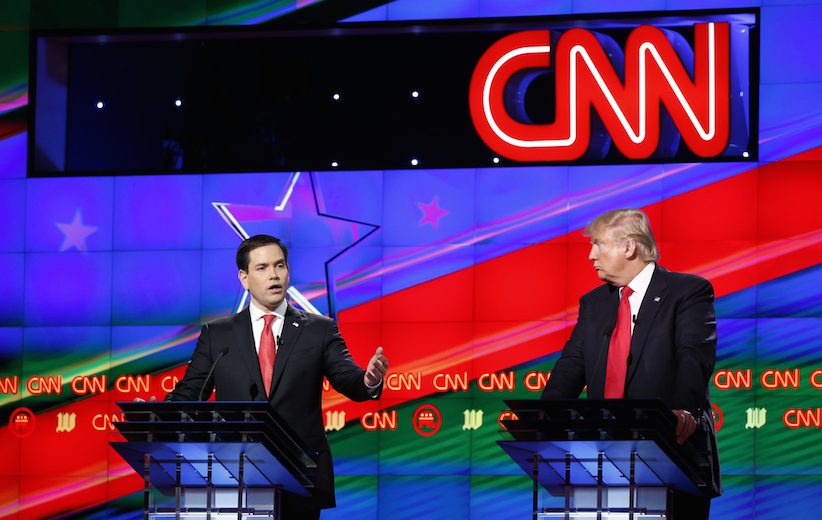 WASHINGTON — A surprisingly civil Republican debate still came with a warning from front-runner Donald Trump to a party that’s at war with itself over his insurgent candidacy: “Be smart and unify.”

While the debate Thursday night focused issues rather than insults, it was not clear that Ted Cruz, Marco Rubio and John Kasich were able to gain ground on the New York billionaire heading into the all-important primary votes Tuesday in Florida and Ohio. Rubio must win his home state of Florida, and Kasich faces the same challenge in Ohio.

Trump was also picking up an endorsement from onetime rival Ben Carson.

In all, 367 Republican delegates are at stake in Tuesday’s voting that also takes place in Illinois, Missouri, North Carolina, and the Northern Mariana Islands, which could go a long way toward determining the Republican nominee.

Democrats Hillary Clinton and Bernie Sanders also will be competing on Tuesday, with Clinton out to regain momentum after her startling loss to Sanders in Michigan this week.

The latest Republican debate, while so relatively calm that Trump called it “elegant,” still had its share of criticism.

Rubio’s message: “I know that a lot of people find appeal in the things Donald says. The problem is, presidents can’t just say anything they want because it has consequences around the world.”

Cruz, eager to cement his position as the party’s last best alternative to Trump, said: “His solutions don’t work.”

Trump was clearly intent on projecting a less bombastic, and more presidential, image.

In a discussion of the threat posed by radicalized Muslims, Trump refused to back away from his recent statement that “Islam hates the West.” He said he wouldn’t stoop to being “politically correct” by avoiding such statements.

The Florida senator said the only way to solve the problem of violent extremists is to work with people in the Muslim faith who are not radicals.

Cruz criticized Trump for what he called simplistic solutions on both trade and on Islamic terrorism, saying: “The answer is not to simply yell, ‘China: bad, Muslim: bad.”’

The candidates split on the likelihood of the Republican race coming down to a contested party convention this summer if no candidate has the needed majority of delegates.