Paul Wells: In their duelling town halls, Biden may have got off easy, but he was sharp and well-prepared. Trump's show, meanwhile, turned into a rough ride. 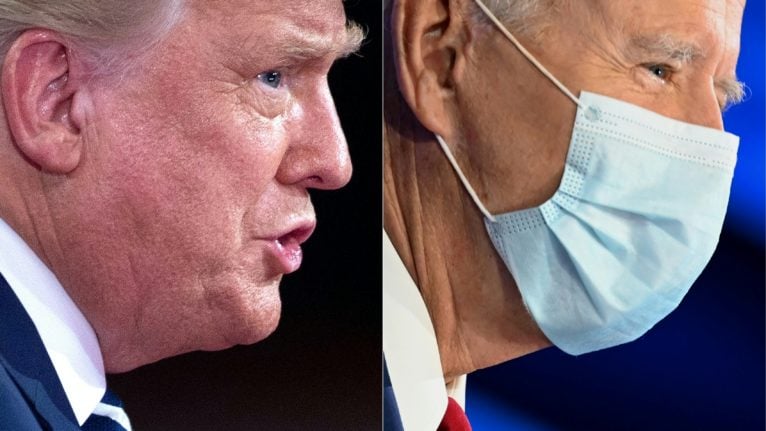 Like you, I’m taken aback when an incumbent head of government doesn’t even want to show up for a debate. But there’s nothing to be done for it. Donald Trump doesn’t like to be interrupted while he’s busy interrupting, so he decided to skip the “virtual” debate that would have had him and Biden sparring in separate cities. Instead he and Joe Biden had simultaneous “town hall” events in separate cities.

Surely everyone else did what I was doing, which was to bounce back and forth between the two shows. So it wasn’t a virtual debate but it was virtually a debate.

Actually Trump’s event, on NBC from the courtyard of the Perez Art Museum in Miami, was pretty much a debate all by itself. The president went toe to (rhetorical, decorously distanced) toe with Today show host Savannah Guthrie, who might have become Biden’s running mate if he could see how determined she was in confronting Trump. It took 20 minutes before Guthrie let anyone in the Miami audience ask a question. By that time she had established that Trump refuses to answer whether he took a COVID-19 test on the day of the last debate; that the only thing he’ll admit to knowing about QAnon is that they’re “very much against pedophilia”, which is like saying the only thing you know about Hannibal Lecter is that he’s big on fava beans; and that when he retweeted a ludicrous QAnon theory that Barack Obama had the Osama bin Laden killing faked, he was just promoting a healthy diversity of opinion.

Meanwhile on ABC from the Philadelphia Constitution Center, George Stephanopoulos was freshening up Joe Biden’s mai tai, and sure, some viewers found the contrast a bit jarring. But to be fair, Biden’s answers tend to steer closer to verifiable truth and further from the plot of an X-Files rerun than do Trump’s. So to some extent it would have been difficult for ABC to match NBC’s level of heated confrontation beat for beat.

Anyone watching both shows and sympathetic to Trump would have seen the night as evidence that the fake-news media is out to get him. Even as someone sympathetic to Biden, I wish he’d had to face more real skepticism from his chosen interrogators.

Even one of the ABC show’s few tense confrontations came from a voter to Biden’s left. Cedric Humphrey, a Black student who identified himself as a “progressive Democrat,” asked what Biden would say to young Black voters “who see voting for you as further participation in a system that continually fails to protect them.” Besides, Humphrey said, telling them “You ain’t Black,” a pointed reference to one of Biden’s more patronizing campaign-trail remarks.

Biden began his response with a glib shout-out to “my buddy John Lewis,” referring to the late congressman and civil-rights hero, who Biden said would have urged young Humphrey to vote. The rest of his answer was detailed, essentially incremental, and not directly an answer to Humphrey’s question about systemic failure.

After Biden had gone on at some length about universal pre-kindergarten, an end to neighbourhood-based discriminatory zoning practice known as “redlining,” and much else, Stephanopoulos asked Humphrey whether he felt the Democrat had answered his question. “I guess so,” Humphrey said mildly.

“Well, there’s a lot more if you want to hear it. Stick around after and I’ll tell you,” Biden said, prompting nervous laughter from his questioner. “No, but I mean it,” said Biden, and for all I know he’s still there now.

Over on NBC, Trump was in his fifth consecutive year of insisting he’ll release his tax records just as soon as he’s allowed. Of the New York Times, which has been releasing Trump tax details that would be shocking if we hadn’t all lived through the last four years, he said, “If they have my tax returns they have to go to jail because it’s illegal. But their numbers are wrong.” Which is news to me: you can go to jail for not having a guy’s correct tax information?

One woman in scarlet-red glasses greeted Trump with, “I have to say you have a great smile. He does! You look so handsome when you smile.” Then she whacked him with a question about stripping children of immigrants of their hitherto-protected rights, he responded with false claims that he hasn’t done that. Which forced Guthrie, the moderator, to correct him again. Which made half of GOP Twitter complain that she was being mean to him again.

Back at ABC, Biden was facing perhaps his roughest patch of the night, on his refusal to say whether he’d “pack” the Supreme Court to respond to Trump’s late-inning nomination of Amy Coney Barrett. Doesn’t Trump have the right to nominate a Supreme Court justice even this late in the game, Stephanopoulos asked? “Once the voting has started, it’s inconsistent with the principles of the constitution,” Biden said. “In my view. You’ll get disagreement among scholars.”

Scholars. Biden also said he “was able to bring down the cost per BTU of wind and solar,” that he’d “like to be moving in the direction of developing electric vehicles,” and that he’d like to “pelletize all the chicken manure and all the horse manure and cow manure” to get the methane out of it and use it for fertilizer. I guess it was a little bit like what life in Canada would have been like if Stéphane Dion had won the 2008 election and never left office.

The night was almost like watching two different shows, which may have been because it was two different shows. Biden’s on ABC was a flashback to a lost time when people were gentle toward one another and it was possible to imagine a U.S. administration having an opinion on pelletization and the luxury of pursuing it. Trump’s on NBC—conceived as a way to make trouble for Biden without having to share a virtual platform with him; this is how you debate if you’re prone to bone spurs—turned into a rough ride. One presumes he’ll complain about his treatment for weeks.

I’m left wondering what an undecided voter who saw a bit of both shows will think. Trump was, by his standards, on good behaviour, though not, by his standards, conspicuously more truthful. I can’t imagine anyone wavering on how to vote would be swayed by what Trump showed them. Biden seemed sharp and well prepared, though he’s often been derided as neither. He dodged important questions, couldn’t figure out how to answer others, but he offered a glimpse of a future where government might concentrate on government again, instead of on score-settling, denial and profiteering. On this night, at least, he was the Biden Trump hoped voters wouldn’t see. This campaign is not going the way Trump needs it to, and these parallel performances did nothing to change that trajectory.