Trump vs. media: 'Yeah, it is going to be like this' 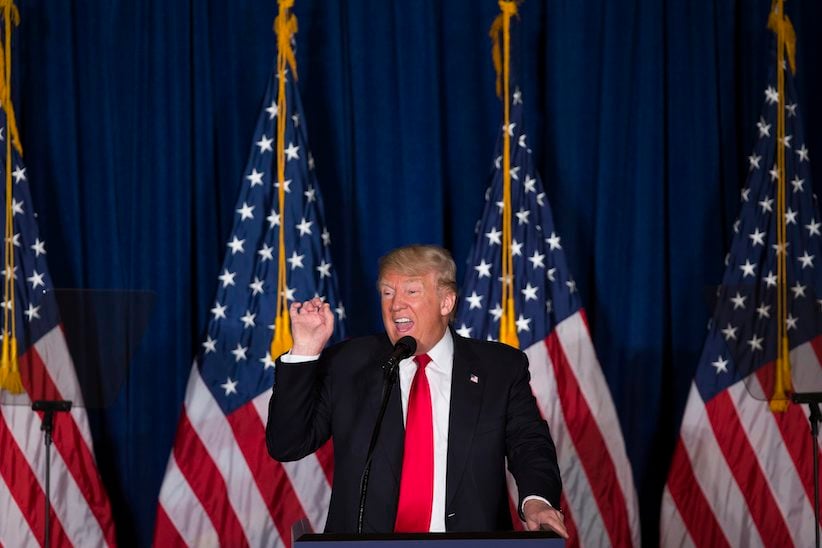 WASHINGTON — Donald Trump’s heated war with the media reached new heights as he turned the brag-worthy feat of raising $5.6 million for veterans’ charities into a sparring match with reporters pressing him on the issue.

“The press should be ashamed of themselves,” a defensive Trump railed during a Tuesday news conference at Trump Tower, called to announce a list of 41 charities that received a cut of the money he raised during a highly publicized January fundraiser.

The presumptive Republican presidential nominee had previously declined to disclose which charities had received the $6 million he’d claimed to have raised, and his campaign had gone back and forth about how much pledged money had come through. The Washington Post had pressed for an accounting of the donations, and several charities said they received checks just last week.

Throughout Tuesday’s 40-minute question-and-answer session, Trump accused the media of being “unbelievably dishonest” in their treatment of him.

“I sent people cheques of a lot of money. … And instead of being like, ‘Thank you very much, Mr. Trump,’ or ‘Trump did a good job,’ everyone’s saying: ‘Who got (the money)? Who got it? Who got it?’ And you make me look very bad,” he complained. “I have never received such bad publicity for doing such a good job.”

While Trump has frequently made the media a punching bag, calling out reporters during his signature rallies, the taunts Tuesday were intense, even for him. The billionaire mogul interrupted his recitation of the list of groups receiving portions of the money to complain about the way reporters had called up charities to try to verify his contributions. He called the political press “disgusting” and dismissed one ABC News reporter as “a sleaze.”

While Trump’s fundraiser, held opposite a Fox News debate he chose to boycott, should have been a positive story for Trump, his campaign’s refusal to disclose details about the money raised became a sticking point. Trump insisted Tuesday that “most of the money went out quite a while ago,” but that didn’t seem to be the case.

The Associated Press spoke or left messages with each of the organizations Trump named. Of the 26 groups that responded by Tuesday, half said they had received cheques from Trump just last week.

Several said the cheques were dated on or about March 24 and shipped out by overnight express — the same date as a Trump interview with The Washington Post, which for weeks had been pressing his campaign to disclose the recipients of the millions raised during the splashy telethon-style fundraiser in Iowa.

Indeed, more than a dozen big cheques were rushed out of New York early last week, bound for veterans charities around the country. The largest, a $1 million check dated May 24 and drawn from Trump’s personal account, was addressed to the Marine Corps-Law Enforcement Foundation, a small Tuckahoe, New York, group that provides scholarships to the children of fallen Marines. The foundation had presented Trump with an award at its 2015 gala held at a ritzy New York hotel.

Trump’s campaign manager, Corey Lewandowski, had originally told the Post that the Iowa event had raised about $4.5 million — less than the $6 million originally announced by Trump — because some who’d pledged contributions had backed out.

Appearing Tuesday on CNN, Democratic presidential front runner Hillary Clinton said she was glad Trump had finally given out the promised money.

“The problem here is the difference between what Donald Trump says and what Donald Trump does,” Clinton said. “He’s bragged for months about raising $6 million for vets and donating $1 million himself, but it took a reporter to shame him into actually making the contribution.”

Trump repeatedly insisted during the news conference that he didn’t want “credit” for the contributions. However, he hadn’t appeared shy about giving away poster-size cheques at campaign events in the weeks after the fundraiser.

On Jan. 30, just before the Iowa caucuses, he gave a $100,000 cheque to the Puppy Jake Foundation, which provides service dogs to wounded veterans. Representatives from the foundation, accompanied by several service dogs, accepted the check at the Adler Theater in Davenport, Iowa, where Trump was being interviewed on stage.

The next day, in Council Bluffs, Trump presented another cheque, also for $100,000, to Partners for Patriots, which also provides service dogs to disabled veterans.

The public cheque presentations trickled off within days, though some of the groups contacted by the AP did report receiving cheques in February, March and April.

Trump spokeswoman Hope Hicks denied Tuesday that timing had anything to do with questions from the media.

“Mr. Trump’s team worked very hard to complete this lengthy process prior to Memorial Day Weekend,” she said. The campaign also said it had taken months to carefully vet each of the groups receiving money.

Trump, who has refused calls to moderate his tone and temperament, also said he has no plans to change his tone with the press if he’s elected to the White House.

“Yeah, it is going to be like this,” he said of potential future news conferences led by a President Trump.