From Mike Pence's relationship with his wife to Trump's job for his daughter, there's a problem with how the White House sees women 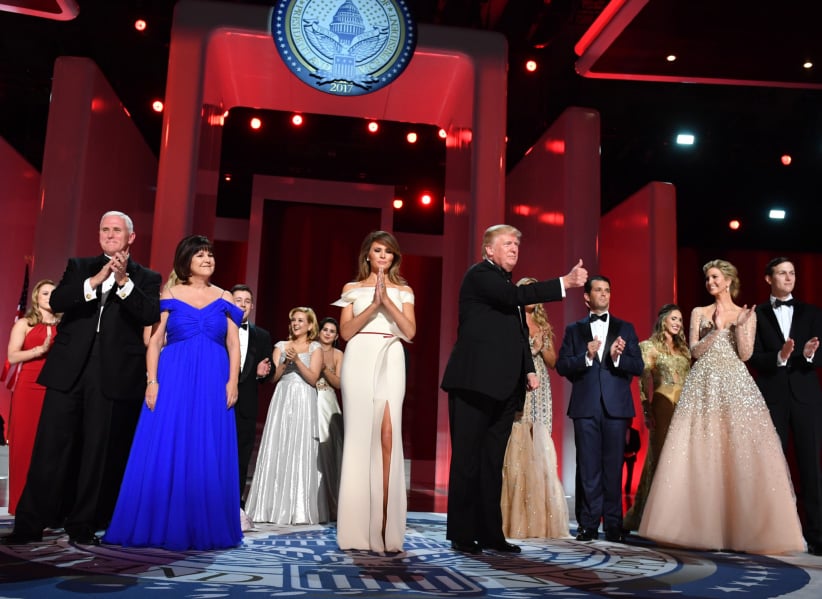 President Donald Trump and First Lady Melania Trump appear with family members and Vice President Mike Pence and his wife Karen Pence at the Liberty Ball at the Washington Convention Center on January 20, 2017 in Washington, D.C. Trump will attend a series of balls to cap hisInauguration day. (Kevin Dietsch/Getty Images)

Trust the the Trump administration to exploit Women’s History Month to highlight, reinforce, and even institutionalize a retrograde female-role trifecta: women as daughters, wives and mothers.

It began with a Washington Post profile of the  woman vice-president Mike Pence calls “mother”: his wife, Karen. The story, titled “Karen Pence is the vice president’s ‘prayer warrior,’ gut check and shield,” revealed a wife who sees her role in archetypal Biblical terms. She’s a “silent, omnipresent partner,” a “helpmeet,” in the tradition of political wives like Laura Bush who provided a similar steel-rod, moral-compass for Dubya.

What got people going, however, was a quote from a 2002 interview Mike Pence gave in which he said he never dines alone with a woman out of respect for his wife. He also refuses to attend events where alcohol is served unless she is by his side. (Pence also told The Hill that he often, though not always, refused dinner or cocktail invitations from male colleagues: “It’s about building a zone around your marriage,” he said. “I don’t think it’s a predatory town, but I think you can inadvertently send the wrong message by being in [certain] situations.”)

Were the Pences private citizens, the terms of their marriage shouldn’t be anyone’s business, or up for debate. But Pence is a political leader who regularly enshrines his evangelical beliefs in law, so they are. And it should be concerning that the U.S. vice-president’s ironclad rule reduces an entire sex to a fungible species, as objects who threaten to lead men into temptation. Hence, the need for a “mother”-wife to avoid their siren song.

The remark also indicates a disconnect from 21st-century business and political mores; alliances are routinely forged outside the office, on golf courses and socially. Barring half the population from business dinners or lunches restricts women from mentoring and employment opportunities, not to mention merely being viewed as equals. As the governor of Indiana, Pence, renowned for legislating against the right of women to make decisions about their own bodies, signed a religious freedom law that gave rise to concerns it could institutionalize discrimination against the LGBTQ community. No one has to wonder if religious freedom could be invoked to justify barring women from key positions because potential private proximity makes the VP uncomfortable.

The week saw another silent wife, Melania Trump, released from her protection at Manhattan’s Trump Towers, at a taxpayer cost estimated at more than $100,000 a day,  to attend a “Women’s Empowerment Forum” in Washington alongside her husband and Pence. Melania is rolled out as “wife” when politically expedient. She played forgiving wife after the Access Hollywood scandal. In February, she was a model of wifely piety, leading a Trump rally in the Lord’s Prayer.

On Wednesday, she addressed the crowd at the 2017 Secretary of State’s International Women of Courage Awards which honoured 13 remarkable women, including two from Syria and Yemen (countries included in President Trump’s Muslim travel ban). All were cited  for their activism combatting domestic violence, environmental disaster, and gender-based violence. “We must continue once again to shine a light on the horrendous atrocities taking place around the corner and around the globe,” Melania said, avoiding mention of her husband, who days into his presidency reinstated a “global gag rule” cutting U.S. federal funding to NGOs that provide access to family planning and abortion services. The first lady then proclaimed a global problem solved: “Together, we must declare that the era of allowing brutality against women and children is over.”

Pence’s speech at the “Women’s Empowerment” forum praised women for entering the workplace before zoning in on traditional roles. “American women are also graduating from college in record numbers. Women leaders are defending our nation and wearing the uniform of the United States of America,” he said, before noting their most important role: “In the midst of busy lives, American women are also doing those most precious things. They’re making time for families and communities and for involvement in religious organizations.” The next day, he advanced legislation that would allow states to block federal family-planning funds to Planned Parenthood.

Trump’s address also returned to the past. The first female role model he invoked was early 19th-century first lady Abigail Adams, who “urged her husband to remember the rights of women.” His awkward homage to abolitionist and suffragette Susan B. Anthony, neither a wife nor a mother, ignored Anthony’s accomplishments, which included paving way to the abolition of slavery and the passage of the Nineteenth Amendment to the U.S. Constitution in 1920. Trump focused instead on her “dreams”: she “dreamed of a much more fair and equal future and an America where women themselves as she said helped to make laws and elect the lawmakers, and that’s what’s happening more and more,” he said.

Or, in the Trump administration, it’s happening less and less: Trump’s 24-person cabinet, featuring only four women, is the most white, male cabinet since Ronald Reagan.

“Dreams” were a big theme with Trump on Wednesday, so much so it seemed he had a stake in Disney’s new Dream Big Princess. “We want every daughter in America to grow up in a country where she can believe in herself, believe in her future, and follow her heart, and realize her dreams,” he said. The same day, an unsigned White House statement announced his eldest daughter Ivanka had her own dreams realized in an official, unpaid West Wing position as her father’s adviser. She’s now officially known as the “first daughter,” a role that exists only in oligarchies.

Ivanka has long been deployed as Trump’s photogenic progressive Working Mom proxy. She makes the lie that her father is a “feminist” palatable. She shows up at West Wing meetings on human trafficking, and this week gave a speech encouraging girls to pursue careers in STEM. Yet she also exists as the Trumpian paradigm of female identity reduced to a daughter-mother-wife blur. Her father has infamously said he would date her were she not his daughter.

Ivanka too promotes a traditional woman-as-mother script. Her “maternity” leave proposed during the presidential campaign only helped women who give birth. Her $500-billion child care plan most benefits two-parent households earning more than $100,000 a year. Her Instagram account glamorizes the blurred wife-daughter-mother trifecta: photos of date-night with her husband, Jared, also an unpaid White House staffer; photos with her dad next to German Chancellor Angela Merkel and Prime Minister Justin Trudeau; videos of her youngest child crawling on the White House carpet.

It was Ivanka, not Melania, who moved to Washington to be by Trump’s side as his work wife. Like Karen Pence, Ivanka is seen to exert a moderating influence and act as moral baby-sitter. Her new role, one her father vociferously denied she would be given, was awarded only due to birth. Now she will serve as the President’s “eyes and ears,” according to Trump’s lawyer. In other words, she’s politically enshrined as his appendage. Think of it as a non-fiction alt-Handmaid’s Tale. Or the introduction of the first “End of Women’s History” month. Historians, please take note.

Correction: The cost of security for Melania and Barron Trump in New York City runs an estimated $127,000 to $145,000 per day. An earlier version of the story reported it at $1 million per day.