On Capitol Hill, the new travel ban neither appeases critics, nor distracts from the latest questions about Trump's sanity 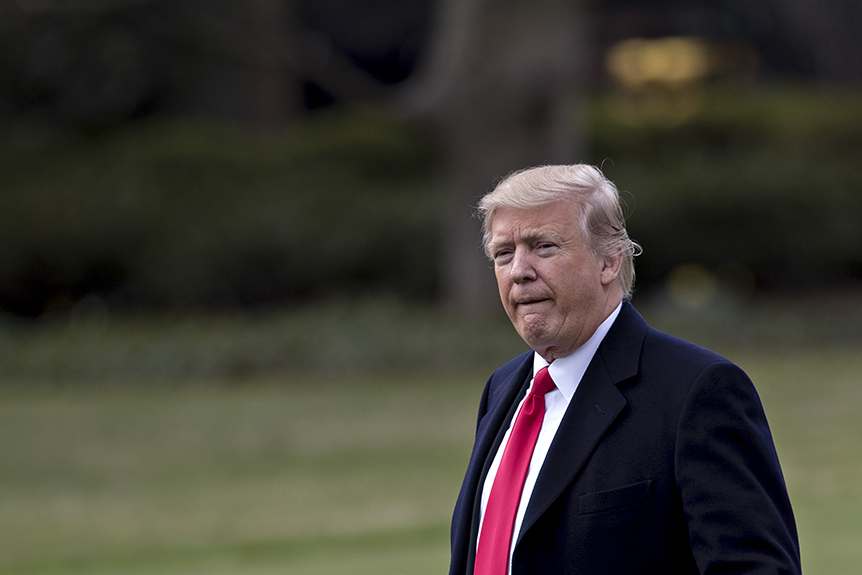 President Donald Trump resurrected his temporary and arbitrary ban on students, scientists and sufferers who seek admission to the United States from six Muslim countries—down from seven in a hat-tip to the Iraqis whose families have died in the hundreds of thousands on the anvil of American hubris. A slightly more universal, but largely identical, act of Trumpian fiat was struck down by the federal judiciary almost as soon as it was issued in January.

Trump’s directive, signed at the White House in secret on Monday morning with no reporters present and then publicly flacked by his embattled attorney general and previously-invisible secretary of state—who took no questions from the press/“enemy of the people”—exempts permanent-resident “green card” holders, persons already holding valid visas and dual-nationals (including Canadians) even if their second passport is Yemeni, Sudanese, Iranian, Libyan, Somali or Syrian. It takes effect on March 16—“we lost the element of surprise,” sighed White House spokesman Sean Spicer—and mandates a review of “extreme vetting” after 20 days and a “transparent” report every six months on how many terrorist plotters actually have been apprehended. All refugees will be barred for 120 days under the new order.

Like the original version, it would have had no effect on repulsing the entry of most of the 9-11 attackers, nor of the French or Belgian nationals who have perpetrated many of Western Europe’s most murderous mass-casualty terror attacks of the 2010s. Like Canadians, citizens of all but five member states of the European Union do not currently require visas to enter the U.S.

In his missive, Trump noted that the Department of Justice “has reported to me that more than 300 persons who entered the United States as refugees are currently the subjects of counterterrorism investigations by the Federal Bureau of Investigation,” and referenced the 2014 case in which “a native of Somalia who had been brought to the United States as a child refugee and later became a naturalized United States citizen was sentenced to 30 years in prison for attempting to use a weapon of mass destruction as part of a plot to detonate a bomb at a crowded Christmas-tree-lighting ceremony in Portland, Oregon.” But neither the revised nor the original travel ban would have any effect on a U.S. citizen such as that Somali-American terrorist.

The original executive order “was not motivated by animus toward any religion,” Trump’s new encyclical insisted, a howler that immediately was attacked by immigrant-rights and religious groups. Assembling a dozen clergy members of various faiths outside the White House Monday afternoon, a woman who identified herself as the Rev. Jennifer Butler, CEO of Faith in Public Life, told Maclean’s that the new decree “is the old Muslim ban in sheep’s clothing.”

“There is some improvement,” conceded Imam Talib Shareef of Washington’s Masjid Muhammad, which styles itself “The Nation’s Mosque.” Imam Shareef, who served 30 years in the U.S. Air Force, said that “our conclusion still stands—the harm far outweighs the benefits.”

“When Donald Trump called for a complete ban on Muslims, I believe he meant it,” Butler said. “He must not only rescind this order. He must repent.”

If the Commander-in-Chief thought that his newest promise-fulfilling proclamation might deflect attention away from his spectacular Shabbat-morning accusation that a “Nixon/Watergate” (sic)  “tapp” (sic) on the telephones at Trump Tower had been personally ordered by the “sick” (sic) Barack Obama just before the 2016 election, a slanderous sucker-punch of unprecedented venality, dubious (at best) veracity and Oval Office disrespect, he failed epically.

The president did not appear in public Monday, but his press secretary, the tightly-wound Spicer, was barraged with questions about the basis, purpose and sanity of a president charging his predecessor with a serious criminal offence without providing an atom of evidentiary proof. (Trump has decided that the alleged espionage must be probed by committees of the House and Senate, presumably as soon as they have finished their investigations of the five million illegal immigrants who voted—without one single, solitary exception—for Hillary Clinton.)

“There’s no question that something happened,” Spicer squirmed. “Is it surveillance? Is it a wiretap?”

MORE: Donald Trump vs. The Courts

While constitutional experts noted that the president—and only the president—has the power to declassify any document he deigns to unveil, Spicer insisted that Trump has chosen to send the matter to Congress in the interests of the separation of powers.

“If we start down the rabbit hole on this, we’ll end up in a very difficult place,” the spokesman said.

Republicans on Capitol Hill, meanwhile, quickly skulked into line. House Speaker Paul Ryan praised the new Muslim ban, saying that, “This revised executive order advances our shared goal of protecting the homeland,” and Devin Nunes, the chairman of the House intelligence committee, threw the TappGate charges and all other leaks, wink-winks and rumours right back at the executive branch by calling for the FBI to investigate the whole mess itself.

Left unanswered was the source—if any—of the IED that the 45th president rolled under the bus of the 44th on Saturday, which came after an outward détente between Trump and Obama during the presidential transition.

Asked whether Trump had ruptured, with a single tweet, any possibility for future cooperation with Obama, should an experienced head be sought during an actual national emergency, Sean Spicer shrugged again.

“I think they’ll be just fine,” he said.