Image of the week: An obligatory photo-op between the president and congressional leaders spiralled out of control—and made a visual tableau for the ages 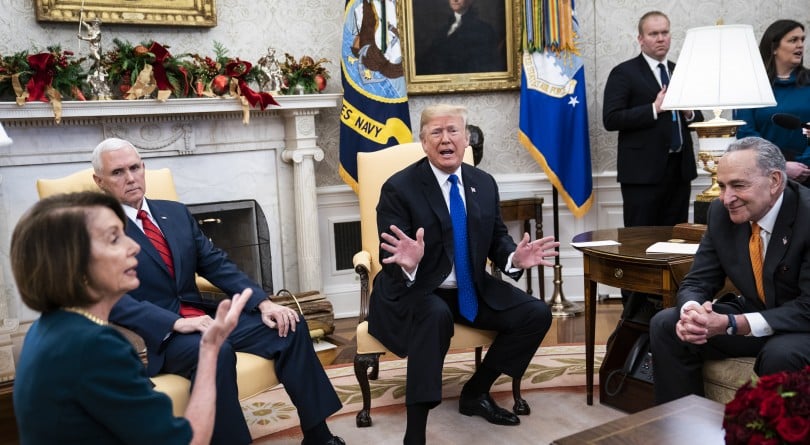 Once upon a time, presidential photo ops were innocuous events, attended by journalists more out of obligation than interest. This week, a seemingly benign one involving President Trump, Vice President Mike Pence and two top Democrats—presumptive House of Representatives speaker Nancy Pelosi and Senator Chuck Schumer—quickly spiralled into a sprawling, 15-minute public debate that instantly went viral. Trump, a former reality television star, has long gamed the media into giving him excessive coverage; he kicked off this meeting with a rambling and impromptu five-minute monologue, spouting grandiose and debatable claims about his desired border wall with Mexico. But Pelosi and Schumer deserve credit for egging the president into behaving like an angry child on national TV. Pelosi opened by referencing a potential “Trump shutdown” of the government (a swiftly trending Twitter hashtag), calmly fact-checking his numbers and claiming she didn’t want to discuss these matters in front of the press. (But … really?) Schumer came to her defence, while Pence sat in a tense half-recline, more bodyguard than politician, completing a four-person tableau worthy of Renaissance art. It was the first face-to-face confrontation between the president and Democratic congressional leaders since last month’s midterm elections, which saw the Dems take control the House of Representatives. It seemed an indication of the tenor of things to come.