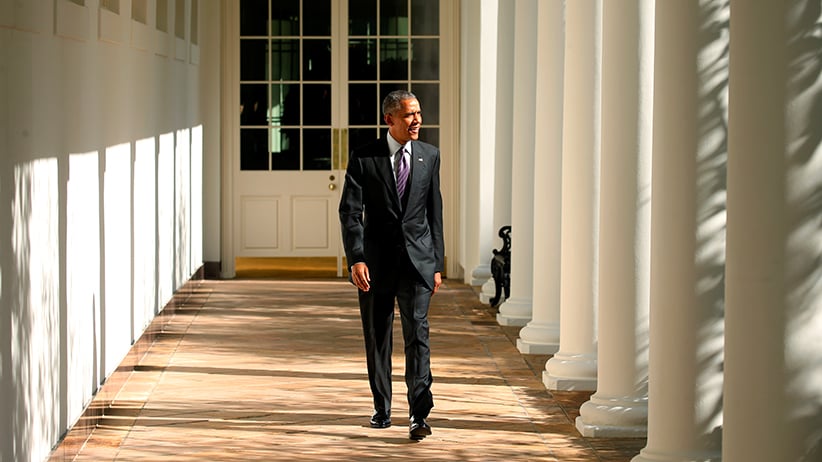 Barack Obama walks the Colonnade toward the Oval Office of the White House November 8, 2016. (Kevin Lamarque/Reuters)

WASHINGTON — President Barack Obama is set to welcome his successor, Donald Trump, to the White House, extending an olive branch to a man he has blasted as unfit to serve as commander in chief and who led the charge to challenge the legitimacy of his own presidency.

The Oval Office meeting scheduled Thursday symbolically begins the transition of power from Obama, a Democrat who ushered in a sweeping health care law and brokered a landmark nuclear accord with Iran, and Trump, a Republican who has vowed to wipe those measures away. Trump takes office on Jan. 20.

Republicans were emboldened by Trump’s stunning victory over Hillary Clinton, giving the GOP control of the White House and both chambers of Congress.

In an emotional concession speech, Clinton said her crushing loss was “painful and it will be for a long time” and acknowledged that the nation was “more divided than we thought.”

Still, Clinton was gracious in defeat, declaring: “Donald Trump is going to be our president. We owe him an open mind and the chance to lead.”

Trump was uncharacteristically quiet in the aftermath of his triumph and made no public appearances Wednesday. He huddled with jubilant, sleep-deprived advisers at his eponymous skyscraper in Manhattan, beginning the daunting task of setting up an administration that will take power in just over two months. He also met with Vice-President-elect Mike Pence and took calls from supporters, family and friends, according to spokeswoman Hope Hicks.

In Washington, Trump’s scant transition team sprang into action, culling through personnel lists for top jobs and working through handover plans for government agencies. A person familiar with the transition operations said the personnel process was still in its early stages, but Trump’s team was putting a premium on quickly filling key national security posts. The person was not authorized to discuss details by name and spoke on condition of anonymity.

According to an organizational chart for the transition obtained by The Associated Press, Trump was relying on experienced hands to help form his administration. National security planning was being led by former Michigan Rep. Mike Rogers, who previously worked for the FBI. Domestic issues were being handled by Ken Blackwell, a former Cincinnati mayor and Ohio secretary of state.

As president-elect, Trump is entitled to get the same daily intelligence briefing as Obama — one that includes information on U.S. covert operations, information gleaned about world leaders and other data gathered by America’s 17 intelligence agencies.

If Trump makes good on his campaign promises, the nation stands on the brink of sweeping change in domestic and foreign policy. He’s pledged to repeal Obama’s signature health care law and pull out of the landmark nuclear accord with Iran. He’s vowed to build a wall along the U.S.-Mexico border and temporarily ban immigration from nations with terror ties.

It’s unclear whether Trump, a highly unusual candidate, will embrace many of the traditions of the presidency. He’ll enter the White House owning his own private jet as well as a hotel just blocks away on Pennsylvania Avenue. He never allowed journalists to fly on his plane during the campaign, as is customary for White House nominees.

Issues of transparency bubbled up right from the start. On Wednesday evening, Trump aides said they would not bring the press corps to Washington with the president-elect for his meeting with Obama, breaking long-standing protocol.

With several million votes still to be counted, Clinton held a narrow lead in the nationwide popular vote. Most of the outstanding votes appeared to be in Democratic-leaning states, with the biggest chunk in California, a state Clinton overwhelmingly won. With almost 125 million votes counted, The Associated Press tally had Clinton with 47.7 per cent and Trump with 47.5 per cent.

Trump’s sweep of the battleground states that decided the election was commanding. He carried Florida, Ohio and North Carolina, three of the election’s biggest prizes, and snatched reliably Democratic Pennsylvania and Wisconsin away from Clinton.

Trump’s support skewed older, male and overwhelmingly white. His supporters said they were deeply dissatisfied with the federal government and eager for change, according to exit polls conducted by Edison Research for The Associated Press and television networks.