Trump's wife and kids to speak at Republican convention 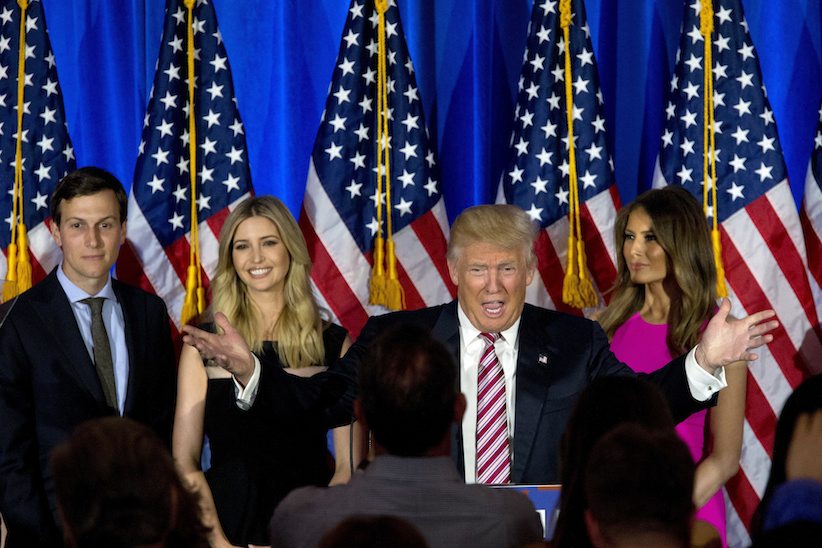 CLEVELAND — This week’s Republican convention will be served a six-pack of speeches from Trumps.

The headline speakers over four nights will include no less than a half-dozen members of the Trump clan, as the Republican party hopes to sand off some of the rough edges on its unpopular candidate with the loving touches of family.

The sextet’s performance starts Monday. Donald Trump’s wife Melania is among several prime-time speakers on the first night. His daughter Tiffany and son Donald Jr. speak Tuesday; his son Eric speaks Wednesday; and on Thursday his daughter Ivanka will speak before the candidate himself strides to the stage in Cleveland where he will formally accept the nomination of Abraham Lincoln’s party.

“To help the American people understand more about Donald Trump the man — not just the candidate they see on the campaign trail, but the breadth of the man himself. His career, his personal life, his philanthropic life.”

The candidate, to date, ranks among the two most unpopular presidential candidates in the history of modern polling, narrowly edging out his rival Hillary Clinton for the ignominious distinction.

Lingering distaste for the presumptive nominee has produced a star-studded list of people skipping this year’s convention — including the party’s four most recent presidents and candidates for president.

The Bushes will be absent, as are Mitt Romney and John McCain. Bob Dole, the 1996 nominee, will attend _ and he’s expressed disappointment at some of the spoilsports who won’t embrace their nominee.

Another person addressing the crowd is the actor who played “Chachi” from the 1970s-’80s show, “Happy Days.” Scott Baio is among the biggest non-political stars of the event, as football players Tom Brady and Tim Tebow denied earlier reports they’d be attending. Another actor speaking at the event is soap star Antonio Sabato Jr.

Manafort dismissed the idea that disunity has forced the party to put together a C-List speaking lineup. He pointed to the fact that an attempt to force a contested vote was crushed when the party’s rules committee met last week.

Polls say the vast majority of Republicans expect to vote for Trump.

“This is a Trump convention,” said the campaign manager.

The rest of the speaking lineup includes a series of lawmakers including the top Republicans in the House and Senate; defeated presidential candidates Marco Rubio, Ted Cruz and Scott Walker; running-mate contenders Newt Gingrich, Michael Flynn and Chris Christie, venture capitalist Peter Thiel, and the head of the Ultimate Fighting Championship Dana White.

Trump, meanwhile, will make more than one appearance. His campaign manager said Sunday that additional candidate-sightings are expected. He would not speculate, however, when asked whether the top speaker might stick to a script.

Trump has bristled at past attempts from advisers to rein in his free-flowing style. He’d refused until recently to read from a Teleprompter, preferring a more free-flowing, stream-of-consciousness style that entertained audiences but left some aides wincing in fear of potential gaffes.

With some reluctance, he began reading some of his more important speeches recently.

“Donald Trump will be Donald Trump,” Manafort said. “Scripted is the wrong word, asking how he’ll be.”