On U.S. Election Day 2, some big questions loom: Is a tie possible? Which candidate has more paths to victory? And where will the legal battles happen? 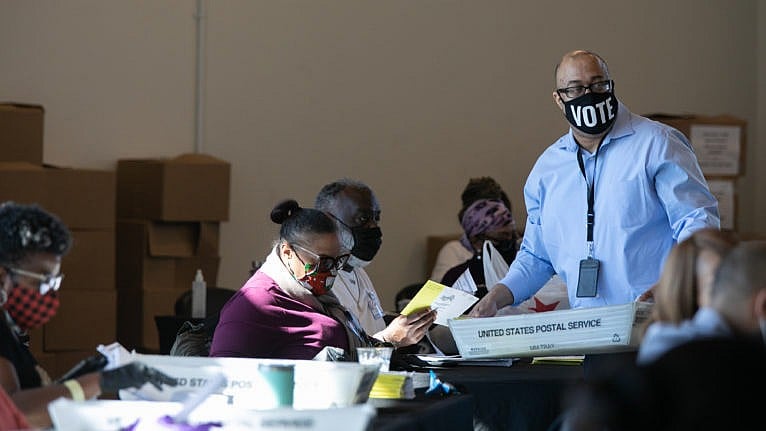 Hello and welcome to day two of the United States presidential election.

Day two of… we don’t know how many. In fact, there’s still rather a lot that we don’t know. Chiefly: How are things shaking out in the final battleground states that will determine the victor?

For all the uncertainty that will hang over the coming days—especially as incumbent president Donald Trump claims victory and yells fraud with millions of votes still to be counted—there are a few questions we can answer.

Is a tie still possible?

The short answer is no, and you can thank Omaha.

It is unclear how many heart palpitations the founders of the electoral college have caused over the years for coming up with an even number of electors. (FiveThirtyNine would have been just as catchy a brand for Nate Silver.) But the remote possibility of a 269-269 split felt especially dicey into Tuesday night.

With most states now called—although official results will take more time—we can be confident that a tie is no longer possible.

That’s because Joe Biden managed out a partial victory in one of only two states whose electors do not operate on a winner-take-all basis. The Associated Press called Nebraska’s second congressional district—that’s the area around Omaha—for Biden at just about 1:30 in the morning on election night, with Trump taking the state’s other four electoral votes. The split means that, mathematically, the closest the result can get is 270-268.

Which candidate has more paths to victory?

The results so far suggest a closer race than many would have predicted. With no early landslide for Biden, Trump’s wins in expected battlegrounds Florida, Ohio and Texas choked off many of Biden’s paths to the White House.

Still, statistically, more combinations of the remaining states could result in a Biden victory than would point to a Trump re-election.

If Biden hangs on to Arizona and ekes out a victory in Georgia, where he is behind but where many urban votes are yet to be counted, he can afford to lose Pennsylvania and either Michigan or Wisconsin. If he loses Georgia but wins Arizona, Michigan and Wisconsin, he can still afford to lose Pennsylvania (thanks to Omaha). If he loses Georgia and Arizona but wins the three former “blue wall” states—Pennsylvania, Michigan and Wisconsin—he still wins. All of these scenarios rely on a Biden win in Nevada, which is usually a blue state but where his lead is marginal so far.

Trump’s path to victory, unlike Biden’s, doesn’t require any states to flip from the 2016 result, though Nevada would be a score. He just needs to retain Georgia, where he is ahead, and the Great Lakes “blue wall” states, where he won in 2016 and remains competitive as final tallies come in.

Whither the popular vote?

It remains fundamentally weird that the popular vote doesn’t matter in U.S. presidential elections, even though it does matter for electing other officials—like senators and House representatives.

Still, it’s worth paying attention to, especially because Democrats are performing better on this front than they did in the last election.

Will there be recounts?

You can bet on it. Some states automatically initiate recounts if the voting margin appears close. That’s what happened with Florida in the 2000 presidential election. (Lord, it was so long ago.) In other states, candidates are allowed to ask for a recount no matter what the margin was.

Here’s how it could work in a few key battlegrounds:

Even after recounts it is likely that results will be contested. Each state follows a different process, with legislatures or members of the executive branch sometimes able to step in and settle disputes. But across the board, strategists are expecting litigation to work its way through state courts and ultimately to the Supreme Court.

In his “victory speech,” given while votes were still being counted, Trump said he would demand that the U.S. Supreme Court stop “all voting”. (It was unclear what, exactly, he was referring to, but it seemed to suggest the counting of absentee ballots and mailed ballots received after election day.) Could that be a thing?

In the literal sense, Trump can’t march up to SCOTUS Wednesday afternoon and ask them to unilaterally prevent any more absentee ballots from being tallied. But if lawyers do dispute results in individual counties, and those cases work their way through the courts and appeal processes, then yes, it is possible that the Supreme Court will get final say. Those legal battles could last weeks or months.

Keep in mind that if Biden does win and he wins by a wide enough margin, individual battles over contested counties may not make enough of a difference to overturn that result.

And if it is exceedingly close, let’s hold off on presuming what justices will do. Because as politicized as the courts are, there’s still this whole question of, you know, an independent judiciary. Yes, Trump seems to expect SCOTUS to back up his claim to victory no matter what. Yes, the president has said he rushed justice Amy Coney Barrett’s recent confirmation so she would be on-side in post-election disputes. But we just can’t responsibly predict what she will do, or the top court will do, with decisions that could throw the entire nature of American democracy into question.

In Pennsylvania, a crucial swing state where we can likely expect more litigation, the highest state court decided before the election that mailed ballots received up to three days after election day should be counted in the final results, even if they do not have a legible postmark. The Supreme Court, in a 4-4 decision with Barrett abstaining, declined to intervene last week.

But just in case, Pennsylvania officials have been segregating late-arriving ballots from the rest of the heap, to be counted separately. Trump’s lawyers will aggressively dispute their validity. SCOTUS may take the issue back up. And its decision may prove a bellwether for the disputes to follow.