In an interview from May, Andrew Puzder spoke about the salacious ads for his burger chains

By The Associated Press December 8, 2016 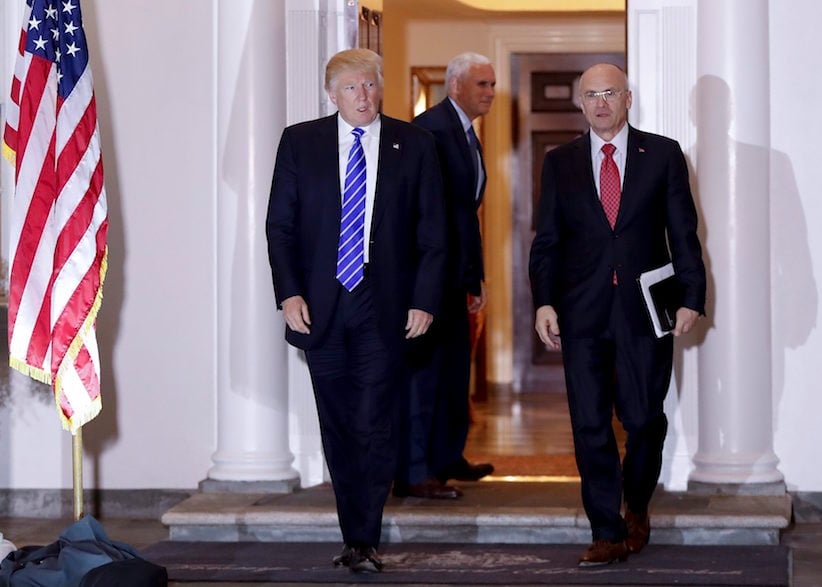 NEW YORK—Andrew Puzder, who heads the company that owns Carl’s Jr. and Hardee’s, was tapped Thursday to head the Labour Department by president-elect Donald Trump.

Puzder has been outspoken about his views that too much regulation is hurting the restaurant industry and that a significant increase in the minimum wage would lead to job losses or prompt companies to look for ways to automate tasks more quickly. It’s why the Fight for $15 campaign, which has been calling for higher pay and a union for low-wage workers and others, issued a statement saying Trump’s decision sent a bad signal to workers.

Before Thursday, however, Puzder was not a household name. Most people were likely more familiar with the racy ads for Carl’s Jr. and Hardee’s starring nearly naked women eating burgers. Puzder has said the ads “cut through the clutter” and make an impression on the younger men the burger chains court.

“People watch for the ads, and want to know when the next one’s coming out,” Puzder, now 66, said in an interview in May of last year.

Here’s what Puzder had to say about the ads at that time. Answers are trimmed and edited for clarity.

Q: How did these ads start?

A: It started with an ad agency we used to have called Mendelsohn Zien, and a guy named Jordin Mendelsohn. He came up with the idea to use Paris Hilton in an ad and make it a very cutting-edge ad, where she was washing a Bentley.

Actually, he tried to chicken out. He called and said, “I don’t think we should do this ad, I want to talk to you.” But I called him back and I said, “I want to do the Paris Hilton ad.”

(Mendelsohn says he didn’t like the initial ad his team developed, but didn’t object to the final version he worked on.)

Q: How do you get women to do the commercials?

A: We have a history of picking these young women before they hit their peak. We put Kate Upton in an ad a month before she got the cover for Sports Illustrated. At the time we picked her, we just said, “This is a beautiful woman.”

We just did an ad with (model and actress) Charlotte McKinney, which kind of created Charlotte McKinney. It was her walking through a farmer’s market. You think she’s naked until the end, and you see she’s got clothes on. It’s for the all-natural burger.

A: We did an ad last summer where (Sports Illustrated model) Hannah Ferguson was washing a big Ford pickup truck for the Texas barbecue burger. We did an event in Texas and I was talking to her. She said, “All us girls at Sports Illustrated, we all talk about who’s going to do the next Carl’s Jr. ad and how can we be the model that does the next ad?”

(A representative for Ferguson says she never made the statement.)

And Padma’s manager contacted us. You know who Padma is?

A: Yeah, Padma actually put in one of her cookbooks how when she was modelling as a teenager, her parents moved to Los Angeles. They couldn’t eat meat, right? But she would sneak out to a Carl’s Jr. and get a Western Bacon Cheeseburger, and then lick the barbecue sauce off her fingers when she got home, so her parents couldn’t tell.

Padma’s manager called and said, “Did you see this in the book?”

So we put her in an ad where she eats a Western Bacon Cheeseburger.

We get a lot of actresses, whose names I won’t tell you, who contact us, who we don’t end up using in the ad because they’re not right for the brand.

Q: What are some examples without saying names? Are they not the right age?

A: Some of it may be age relevant. Although, Heidi Klum is no spring chicken.

It depends on a lot of interlocking factors, and what products we’re promoting. First of all, you really need to be able to eat the burger like you’re loving it. We don’t want somebody that’s going to go out there and say, “Well, I don’t eat burgers.”

Q: Has there been a problem with that?

A: We used Kim Kardashian in an ad. But Kim really couldn’t eat the burgers. Luckily, we had a salad we were promoting, so we used Kim in the salad ad. But if we had not been promoting a salad, we probably never would’ve done an ad with Kim, because she wasn’t good at eating the burger. She’s too tiny. She’s really little.

(A representative for Kardashian disputed the account and said a salad ad was chosen because Kardashian had a fitness DVD and wanted to eat something that fit with her brand.)

Q: Do you get a lot of complaints about the ads?

A: They’ll send out an email blast. I won’t name the organization, but there are a couple organizations that do that.

One of these groups is headed by a very nice woman who I met at the Republican Convention in 2012. And she came up and said, “Andy, I read your stuff, I read what you write, and I agree with you politically. But I want you to know I’m the head of X organization and we do these email blasts because we really don’t like your ads.”

I grabbed her hand and said, “Thank you.” And she said, “What do you mean?”

I said, “If you guys don’t do an email blast with one of our ads, I run into the head of marketing and say, ‘What’s the matter with the ad?'”

Q: Speaking of the convention, you’re outspoken politically. You write columns and were an economic adviser to Mitt Romney’s presidential campaign. Any fear of alienating customers?

A: It doesn’t seem to have impacted the business at all. If you were buying products or going to movies based upon the politics of the people involved, well I probably couldn’t go to half the movies I go to.

I think people give you a break. This is America. You’re allowed to have your views.