There was no shaking the faith of invitees at the White House's National Day of Prayer service. Least of all Wynonna Judd's. 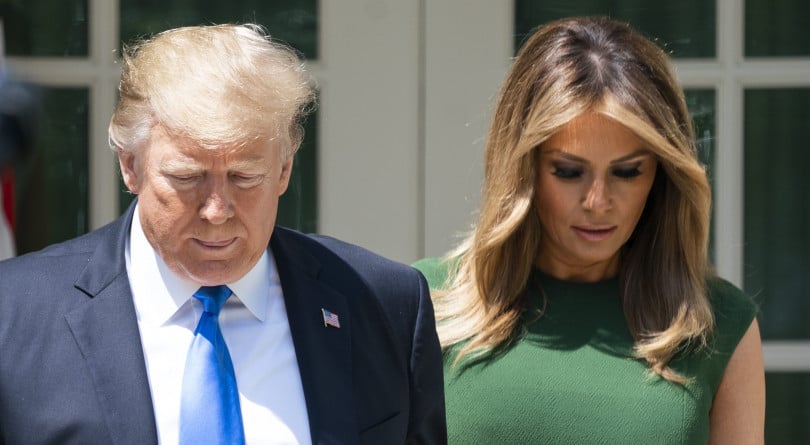 The president stood in the heavenly sunshine that was flooding his soul with glory divine. Before him, the bearded rabbis in their thick black suits and the Sikh in his turban and the Muslims in their headscarves and the swaying, hand-waving Pentacostals in their fervent, sweating certitude bowed their heads in the Rose Garden of the White House and nodded Amen when Donald Trump beamed that “People say, ‘How do you get through that whole stuff? How do you go through those witch hunts and everything else?’ We just do it. And we think about God.

“As God promises in the Bible, those who hope in the Lord will renew their strength, they will soar on the wings like eagles, they will run and not grow weary and they will walk and not be faint,” the president promised his congregation, quoting Isaiah 40.

Thursday was the annual National Day of Prayer in the United States, a country—though certainly not the only country—in which murderous attacks on people at worship have cost the lives of women and children and men of many faiths, races, and creeds in recent months. One of the most special White House guests this day was the astonishing prelate of the synagogue in Poway, Calif., with one arm in a sling and both hands bandaged where a teen-aged gunman had wounded him on the last morning of Passover. But the rabbi, an ex-Brooklynite named Yisroel Goldstein, had not ceased in his sermon even as a woman near him fell dead, and his son’s head had been grazed by a bullet, and his two-year-old had slept through the assault—“miracles, miracles, miracles” the rabbi said—and now the holy man was counting Donald Trump’s presidency among the mysterious and wonderful workings of the Lord Adoshem.

“Mr. President, when you called me, I was at home weeping. You were the first person who began my healing. You healed people in the worst of times and I’m so grateful for that,” the rabbi said of his talk with the great consoler the night after the shooting, and he thanked Trump for “talking as if he’s talking to his own brother to comfort me and lift up my spirit.”

“The president has been accused of speaking thousands of falsehoods,” a Maclean’s correspondent (and ex-Brooklynite) noted to Rabbi Goldstein. “When he speaks of God and prayer, do you believe him?”

“I believe every human being of what they say,” the wounded grandfather replied. “I trust them at their word. It’s not my place to judge anyone.”

The shooter, Rabbi Goldstein said, was born a precious and innocent child of God, yet something had turned him toward evil.

“He got that hatred somewhere,” said Yisroel Goldstein, standing outside the whitewashed house of Trump.

The day was professed to be ecumenical but the majority of the blessings invoked from the pulpit invoked the name of the Christ. This pleased a woman who called herself Doctor June and who had come to broadcast the event to her evangelical followers.

“This is the biggest day of the year for us Christians,” she said.

“I thought Easter Sunday, when Christ rose from the dead, was the biggest day,” she was told.

“I mean politically,” said Doctor June Knight, a licentiate of theology and the former convener of the Middle Tennessee Junior League Cheerleaders Association

“When Donald Trump speaks of God and prayer, and when he says that he is a Christian, do you believe him?” she was asked.

“We believe he is,” the devotionist answered, “because God is working through him for the Christian agenda.” And she proclaimed that Donald Trump had been called by God as “a modern-day Cyrus,” and quoted from Isaiah 45, in which God anoints the said Cyrus, “whose right hand I have grasped, to subdue nations before him, and strip kings of their robes, to open doors before him — and the gates shall not be closed.”

“Was Barack Obama a Christian?”

“We don’t choose the president,” Doctor June said. “God does.”

Now the man who would close the gates between Texas and Mexico called out a woman in the audience, draped with crucifixes and with hair the colour of brimstone, and this was Wynonna Judd, who was huge in country music a quarter-century ago and who said that she had known Donald Trump for 35 years.

“When Donald Trump says that he is a Christian, do you believe him?” Ms. Judd was asked.

“I know that his faith rumbles in my spirit,” she answered. “When he speaks, something vibrates like a tuning fork.”

“I am just a servant in the Lord’s army,” said Wynonna Judd.

A woman named Cain took the rostrum and started raising hellfire about “morality and integrity” and she said that it was the Lord in His wisdom who had chosen Donald Trump to lead this bountiful and fully-employed land. She quoted the Book of Jeremiah—“Before I formed you in the womb I knew you; before you were born I sanctified you; I ordained you a prophet to the nations.”

“We are not wrestling against flesh and blood but against principalities, wickedness and darkness, so we declare every demonic network to be scattered right now,” said Paula White Cain, the well-known Florida mega-church tele-pastor, quoting from Ephesians.

“We understand the power of prayer,” said Donald Trump, rising above the tempest, while the heathens raged.

“This is a mensch par excellence,” concurred a bandaged rabbi. “You heal people in the midst of tears.”