What Americans don't know... should worry us

Bruce Anderson: Our polling suggests that Trump’s leadership has made many Americans less aware of America’s standing in the world, and more open to off-the-wall ideas 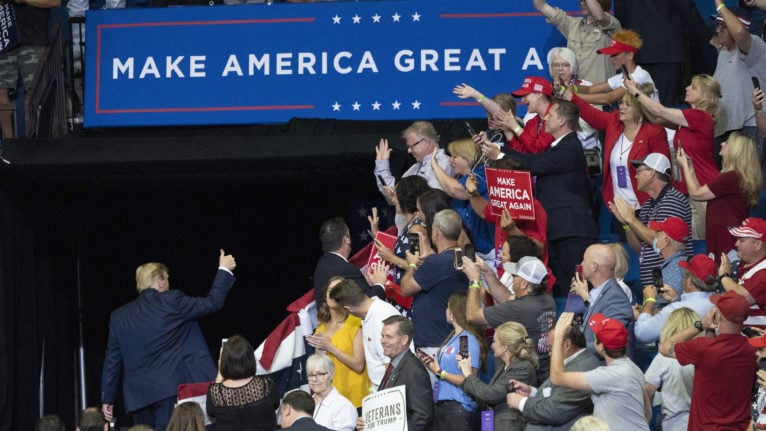 In 38 years polling public opinion you don’t only learn what people think.  You learn a lot about what people don’t know.

Our survey of Americans was fascinating but troubling.  Many Americans know remarkably little about the world beyond their borders.  Now you might say this isn’t new. But here’s what is new.

Knowledge of the world seems to be deteriorating in America, abetted by a president—ignorant of the world himself—whose formula for political success depends on more people becoming less informed.

Democracies turn into something else when the media is controlled so that people only hear one version of reality. In the past, that often required a physical action to shut down a free press. But today, there’s an easier route—more subtle but highly effective. Let America’s adversaries use social media platforms to make “friends” and spread falsehoods among American voters. And find and nurture news organizations willing to trade objectivity and integrity for eyeballs and dollars.

READ MORE: Buy Alberta? Prepare for a civil war? What Americans think in the age of Trump.

In 2016 many were shocked to learn how Russian hackers compromised the presidential election using Facebook. Many were appalled at how Fox News became a cheerleader for the least qualified of 17 Republican nominees and became his house organ once he was installed as president. If Trump lied, a daily, sometimes hourly occurrence, he knew he could do it on Fox without being challenged.

Four years later, how mixed up has this left people?  Our poll leaves some clues:

If Trump loses, most Republican voters say they will believe the election was rigged. If he tries to stay in office after losing, they wouldn’t want the military to enforce the election results. In other words, their trust in or need for him is so powerful they don’t stop to think what sort of precedent it would set to leave the country in a state of impasse.

As many Americans think Russia is America’s best friend as think France, Italy or Germany is. This despite America having spent decades in a military alliance with France, Italy and Germany to protect against Russian military ambition, despite proven Russian use of cyberwarfare to disrupt American social peace and elections.

Under Trump’s time in office, Republicans are four times more likely to say relations with Canada have improved (41 per cent), than think they have worsened (8 per cent).  This is mindless partisanship—the facts of the last few years were almost constant tension around NAFTA, dairy subsidies, steel and aluminum tariffs, the idea of Canada as a security risk, the G7 Charlevoix summit friction. But for Republican voters everything seems to be going swimmingly.  Eighty-five per cent say Trump has done a good job with Canada, and 78 per cent say Trudeau has done a good job managing the relationship with the U.S. Three out of four GOP voters want trade, co-operation and friendship with Canada—amazingly they believe Trump does too.

Less than 12 per cent of Republican voters think U.S. relations have soured with Great Britain, France or Germany. This despite almost constant friction in these relationships, on topics from trade to NATO to climate change to refugee and immigration policy.  Trump has by all accounts a terrible relationship with President Emmanuel Macron of France and Chancellor Angela Merkel of Germany. He was on bad terms with U.K. Conservative Prime Minister Teresa May and launched scathing attacks on London’s Mayor. It’s too soon to tell whether his rapport with Prime Minister Boris Johnson will take things in a better direction.

The lack of a common fact base makes it easy for people to imagine what they want to imagine. Right now, with racial divides widening, America feuding with most of its allies, an economy stumbling, a deficit at unprecedented levels, and a pandemic that has killed 120,000 and remains out of control in many areas…80 per cent of Republicans think Trump has made America greater.

A majority of Republican voters believe their country has better controls against the spread of coronavirus than Canada does. But the virus has killed 361 people for every million Americans. In Canada, the mortality rate is 225 per million people.

It’s tempting to wonder what’s the big problem if American pride and narcissism make people less aware of the facts of the world around them.

But if you live in Canada, once likened to being a mouse in bed beside an elephant the risks are not so easy to joke about as they once were. A similar but more apt metaphor of Trump’s America is John Mullaney’s horse running free in a hospital.

The mood in America has worsened. America has become richer but angrier. More limited in its understanding of the world and more divided internally. Half see a serious chance of another civil war.

What could go wrong for Canada? Half of Republican voters would go along with abandoning NORAD, roughly a third would support building a wall and putting troops along the Canadian border. Happily, most Americans are against invading Canada to get at our resources. But stop and think about the fact that only 56 per cent of Americans strongly oppose the idea.

These findings can’t properly be interpreted as hostility to Canada. Instead they are a glimpse at what happens when a sizeable proportion of the population stop thinking much about the consequence of the choices their country makes.

Party over Country and Leader over Party have cast a shadow on the “shining city on a hill”.  And in a little more than 100 days from now the rest of the world will find out if the next four years will see more of the same.