What celebrities will be at Donald Trump's Inauguration Day?

Donald Trump has waged Twitter war with 'A' listers, and so unlike ceremonies past, his inauguration will be light on star power 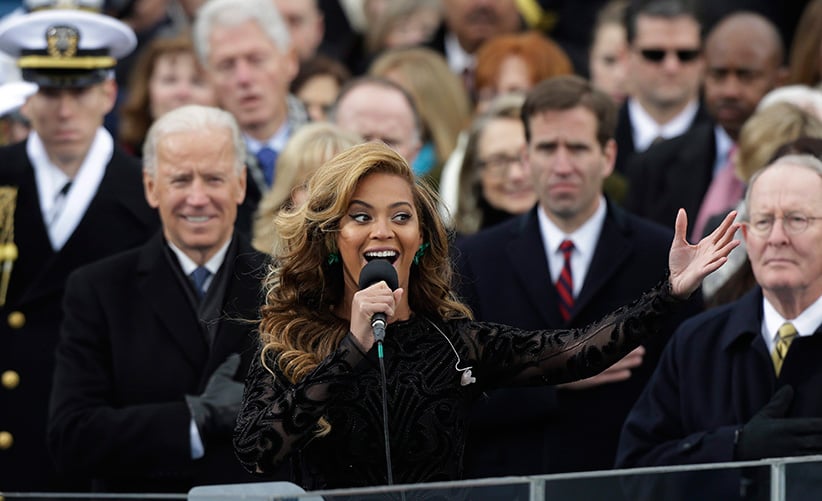 Beyoncé sings the national anthem at the ceremonial swearing-in at the U.S. Capitol during the 57th Presidential Inauguration in Washington, Monday, Jan. 21, 2013. (Pablo Martinez Monsivais/AP/CP)

The answer to which celebrities will appear at Donald Trump’s inauguration really depends on your definition of “celebrity.” Eight years ago, President Barack Obama got Beyoncé to perform at his inauguration. This time around, it seems the best Trump can do is Jackie Evancho, a 16-year-old singer who once finished runner-up during the fifth season of the TV show America’s Got Talent. She will sing the national anthem at the Jan. 20 inauguration.

But that doesn’t mean there won’t be some recognizable faces in the crowd. For starters, the guest list always includes former presidents and their spouses, and indeed defeated Democrat Hillary Clinton will be in attendance alongside her husband, former president Bill Clinton. George W. Bush and Laura Bush will also be there, as will former president Jimmy Carter. Ninety-two-year-old George H.W. Bush, however, will be the only living president who won’t show up, because of health reasons.

Trump has long battled with A-list celebrities on Twitter, later saying that he didn’t care about their lack of support, adding that the inauguration is for the people. (Though he reportedly will enjoy an appearance from romance icon Fabio.)

On Dec. 22 he tweeted: “The so-called ‘A’ list celebrities are all wanting tixs to the inauguration, but look what they did for Hillary, NOTHING. I want the PEOPLE!”

Those looking for A-list celebrities would do well to stick around after the inauguration parade until the following day when a Women’s March on Washington in protest of Trump will reportedly include 100,000 women, including the likes of Cher, Katy Perry, Amy Schumer, Julianne Moore and Scarlett Johansson.