What Donald Trump said on Meet the Press

WASHINGTON — Republican presidential nominee Donald Trump is asserting that countries like France that he says are compromised by terrorism may be subjected to the “extreme vetting” he proposes as a deterrent to attacks in the U.S.

In an interview to air Sunday on NBC’s “Meet the Press,” Trump also rejected suggestions that his stance on requiring NATO members to pay their share was a mistake; defended Fox News founder Roger Ailes, who left the network amid accusations of sexual harassment; criticized rival Hillary Clinton’s newly named running mate, Sen. Tim Kaine, for accepting gifts while Virginia’s governor; dismissed descriptions of his nomination acceptance speech as “dark,” instead calling it “optimistic”; and expressed disapproval of David Duke, the former Ku Klux Klan leader who is seeking a Senate seat from Louisiana.

For months Trump has called for a temporary ban on foreign Muslims seeking to enter the United States and criticized the Obama administration for continuing to admit refugees from Syria. In his speech Thursday night at the Republican National Convention, he said the U.S. “must immediately suspend immigration from any nation that has been compromised by terrorism until such time as proven vetting mechanisms have been put in place” _ notably leaving out any reference to Muslims or to Syria, Iraq and other Mideast nations.

In the NBC interview, Trump noted “specific problems” in Germany and France — both countries have been rocked by fatal attacks in public places in recent weeks — and “Meet the Press” host Chuck Todd asked if his proposal would limit immigration from France. “They’ve been compromised by terrorism,” Todd said.

Trump replied: “They have totally been. And you know why? It’s their own fault. Because they allowed people to come into their territory.” He then called for “extreme vetting” and said: “We have to have tough, we’re going to have tough standards. … If a person can’t prove what they have to be able to prove, they’re not coming into this country.” 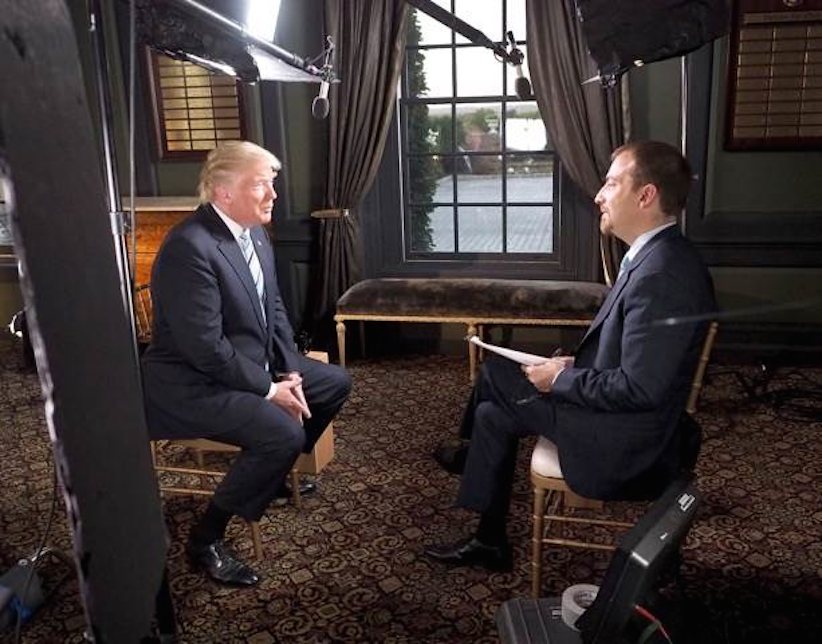 During his interview, Trump also:

— Rejected suggestions that his comments on NATO members being required to pay their share in order to get the benefits and protection afforded by the treaty were a mistake.

— Defended Ailes, who resigned from Fox amid sexual harassment allegations by numerous women. Trump described Ailes as a longtime friend and said “some of the women” complaining about Ailes have been helped by him in the past and earlier had said good things about him. “It’s very sad,” Trump said. “Because he’s a very good person. I’ve always found him to be just a very, very good person.”

— Criticized Kaine for accepting $160,000 worth of gifts, much of it for trips, while serving as governor. The gifts were legal under the state’s permissive ethics rules, but Trump said: “To me, it’s a big problem … how do you take all these gifts?”

— Took issue with descriptions of his convention speech earlier in the week as “dark.” ”It was an optimistic speech,“ Trump said. Referring to his mention of crime as well as shootings and terrorist attacks both here and overseas, he said, ”Sure, I talk about the problems, but we’re going to solve the problems.“

— Criticized Duke, who cited Trump’s campaign as an inspiration for his Senate bid. Trump was quick to say he rejected efforts by Duke to run for the Senate. In an interview several months ago, Trump was asked about Duke offering his support and Trump responded: “I don’t know anything about David Duke.” His initial response drew harsh criticism from Democrats, Republicans and civil rights groups,“ and he later said ”I disavow“ Duke’s support.