What is a trial in the Senate?

When it comes to impeachments, the Senate is judge and jury. 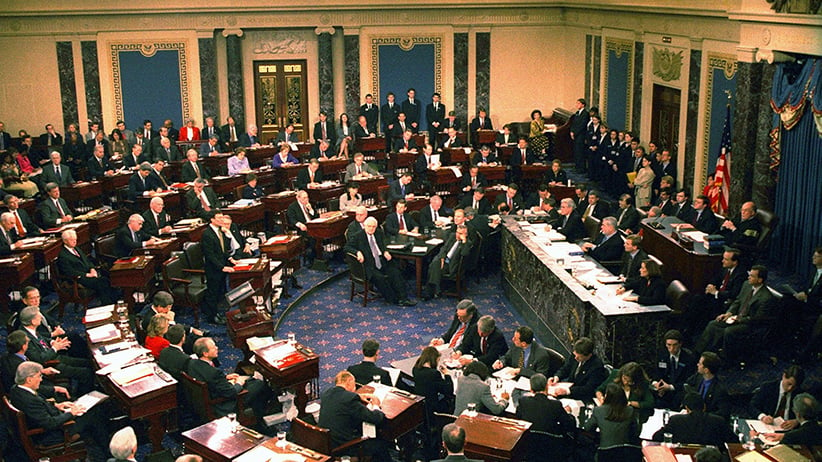 WASHINGTON,D.C. The U.S. Senate votes in its trial against impeached U.S. President Bill Clinton on February 12,1999. Clinton escaped removal from office and declared himself “profoundly sorry” for the year-long ordeal that led to his acquittal in the Senate impeachment trial. (AFP/Getty Images)

In Trump’s world, the appointment of a special counsel to investigate his election campaign’s ties to Russia is all part of “the single greatest witch hunt in American history.” In the real world, it could lead to evidence of wrongdoing that in turn could raise the potential for Trump to face impeachment.

This is the single greatest witch hunt of a politician in American history!

Even if a President is impeached by the House of Representatives, the U.S. Constitution says “the Senate shall have the sole Power to try all Impeachments.” The Senate is the court and its members become both judge and jury. For example, when President Bill Clinton was impeached by the House in 1998 for perjury and obstruction of justice, he was later found not guilty in the Senate trial, and got to finish up his term as president.

In U.S. history, dating back to 1776, the Senate has undergone only 19 formal impeachment proceedings, with a record of eight convictions, seven acquittals, three dismissals and a lone resignation. The majority of the trials were of judges, but there have been trials for two sitting presidents, Clinton in 1999 and President Andrew Johnson in 1868. (Richard Nixon resigned before the Watergate scandal even got this far.)

It should also be noted that in a Senate trial, a simple majority isn’t enough to find someone guilty. Instead, a supermajority of two-thirds is required, a rule implemented to ensure that impeachments would likely require members of both political parties to be in agreement. (The Senate voted 35-19 to impeach President Johnson, one vote shy of removing him from office.)

All of which is to say if Donald Trump ever does face a Senate trial for impeachment, Vice-President Mike Pence won’t get to preside—though he will stand the chance of becoming the 46th President of the United States.