What James Comey's firing reveals about the Trump White House

If you’re going to go nuclear on the FBI, writes a former PMO communications director, at least do it—and communicate it—competently 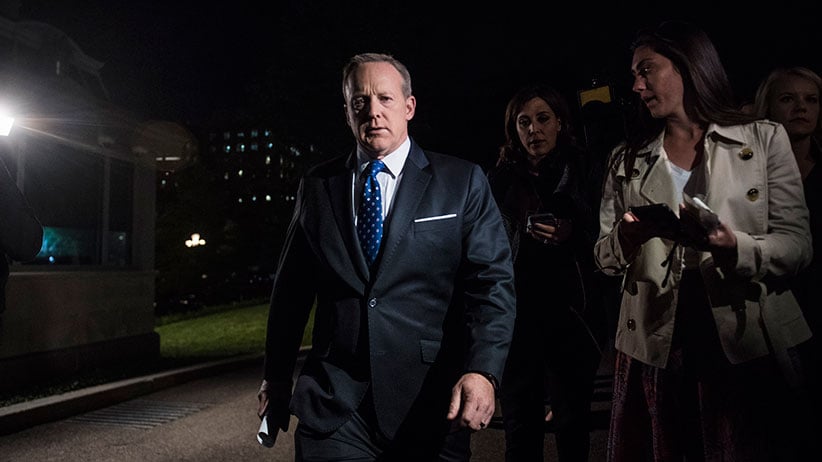 Leave it to others to dissect the implications, constitutional and otherwise, of President Donald J. Trump’s decision to sack James Comey, his FBI director. Suffice it to say it was momentous, in that it will either kill the investigation into his campaign and business ties to Russia, or provide it with unstoppable momentum.

Which makes the President’s decision to spring Comey’s firing out of nowhere all the more surprising. After all, if you’re going to roll the dice in politics, you had better tilt the table to your advantage as much as possible.

In this instance, it doesn’t even appear that Trump knew he was even in Vegas.

So spare a moment, then, for Sean Spicer, the beleaguered White House press secretary, whose team was tasked with polishing this turd. And tasked at short notice—reportedly less than an hour—which is evident when you look at the trainwreck front pages around the United States (and the world) in response to the news. Let’s just say no one—save for reliable friends like Fox News and the alt-right riffraff who cheer every breath out of either end of Trump—are hailing Comey’s dismissal.

If reports of White House befuddlement at the lack of Democratic support for the sacking are true (why wouldn’t the Democrats want Clinton-killer Comey gone, the thinking went), then the dereliction of duty in the West Wing is complete.

Did no one with a suitable rank work out the optics of Comey’s scotching? Did the White House forget Comey was leading an investigation into their man, and that firing him would be construed as a Richard Nixon-like obstruction of justice? Of course they didn’t.

If Trump had it in for Comey, and had it in for him for a long while (according to the White House, and recent reports), why not take another day or two to try to put a workable communications plan together around his dismissal?

How would a good plan have made a difference? For one thing, waiting an extra day or two would have avoided the ridonkulous optics of firing Comey, raising the spectre of Nixon and generating a Russia storm, only to then welcome Russian Ambassador Sergei Lavrov and former Nixon secretary of state Henry Kissinger to the White House the very next day. (And to allow the Kremlin’s photographer a chance to capture and disseminate the images!)

Waiting would also have allowed the White House to put together a coherent story and transmit it to spokespeople and surrogates. Instead, we had scenes of Sean Spicer conferring haphazardly in the bushes of the White House with his team on the night of Comey’s dismissal before re-animating the long-dormant KellyAnne Conway for cable news battle. He then sent out his deputy to sell a completely different story (that the deputy attorney general wanted Comey gone, planted the thought with Trump, and the President agreed) at the next day’s White House briefing. On Thursday, Trump went on NBC News to say that firing Comey had been his plan before hearing from the deputy attorney general. It all reeks of embarrassing improvisation.

Now, every government has to wing their communications from time to time, but that’s usually in response to events, and not in response to planned ones. The only times I can recall being blindsided so badly on an announcement in my former life in Stephen Harper’s PMO was when everyone in Ottawa started having kittens about the long-form census being cancelled. Let’s just say the next few weeks and months were a mad scramble to find something sexier to put in the window. We couldn’t.

As it was, a coherent story could also have been transmitted to the President himself, whose letter to Comey informing him of his fate’s only purpose, it appears, was for the President to allege, without evidence, that Comey had assured him on “three separate occasions” that he wasn’t under “investigation.”

If this truly was about Comey doing “a bad job”—and there is a case to be made there—why not say that explicitly in the letter, instead of hiding behind his deputy attorney general? And if this wasn’t about the increased tempo of the FBI’s Russia enquiry, which the White House is now explicitly saying it wasn’t, why not wait to pair Comey’s sacking with the appointment of his successor—or at least with a plan to appoint his successor?

Of course, if this really was about competence, the White House would have demonstrated its own and had a name in hand. That it didn’t tells you it’s about Russia, and that senior staff are blowing with the President’s famously shifting winds.

Nevertheless, the deed is done. Now the White House will scramble to sell its version of the truth.

The thing that will come back to bite the White House in the backside with Comey is the thing that nukes all communications plans, both good and bad: you can’t control all of the voices involved. That the Washington Post is citing 30 sources for its (unflattering) tick-tock into the dismissal means the tempo of leaks, which are said to drive Trump mad, will only increase.

I’ll foolishly give the White House the credit of having anticipated this, which means they’ve decided they can whether the storm of anonymous and angry G-men the sacking of Comey will generate.

How can they be so confident they’ll survive?

The White House knows two things: one, this kind of press hysteria against Trump makes his base love him more, and two: in the hyper-partisan swamp called Washington, no Republican has the guts to take on a President of its own stripe.

What checks? What balances? Trump will survive as long as his own side allows it.