What made Nancy Pelosi go on a tear

Image of the Week: The Speaker's much-discussed gesture achieved what she seemed to intend, eclipsing the speech itself 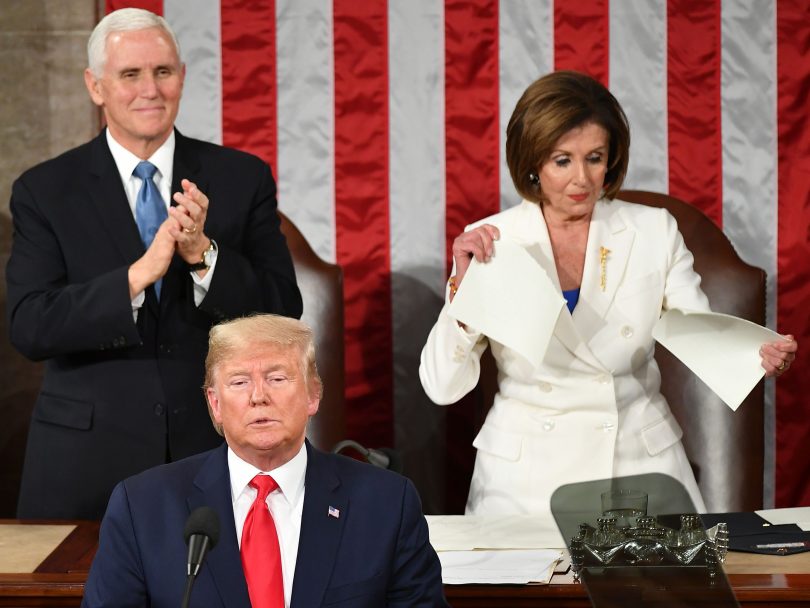 House Speaker Nancy Pelosi rips her copy of Trump's State of the Union address after he finishes delivering it. (Mandel Ngan/AFP/Getty Images)

Following a typically Trumpian State of the Union address by the American president, House Speaker Nancy Pelosi rose from her seat, grabbed a paper copy of the speech and casually tore the pages in half, and tossed them aside. Pelosi is no stranger to grand, meme-worthy gestures—her exaggerated patronizing clap at the president; her funereal black dress during the impeachment trial in Congress—but this one seemed different. This moment felt more important. Maybe it was the backdrop of the doomed-to-fail impeachment process wrapping up in the Senate. Or Trump’s good-for-nothing Middle East “Deal of the Century,” which is unlikely to go anywhere. Or his brink-of-war attack on Iran. Or maybe Pelosi’s theatrical act was a political move to show the spine of a Democratic party that is otherwise, frantically, trying to count votes in Iowa. Or maybe it was none of that—maybe it was simply an impromptu retaliation, like she told reporters afterward. “He shredded the truth, so I shredded his speech,” she said. Regardless, the move worked. The following day, it was not Trump earning headlines for boisterous statements, but Pelosi, pushing herself and Democrats back in the spotlight at any cost. Trump himself shared more tweets about her than about his speech. But he has no one to blame but himself. After all, if Trump has taught Pelosi anything, it’s that no press is bad press.

FILED UNDER: Donald Trump Image of the week Instagram Nancy Pelosi State of the Union 2020