What role will Jared Kushner play in Trump's White House?

Trump's son-in-law may not hold a formal role in the White House, but appears poised to remain a powerful figure 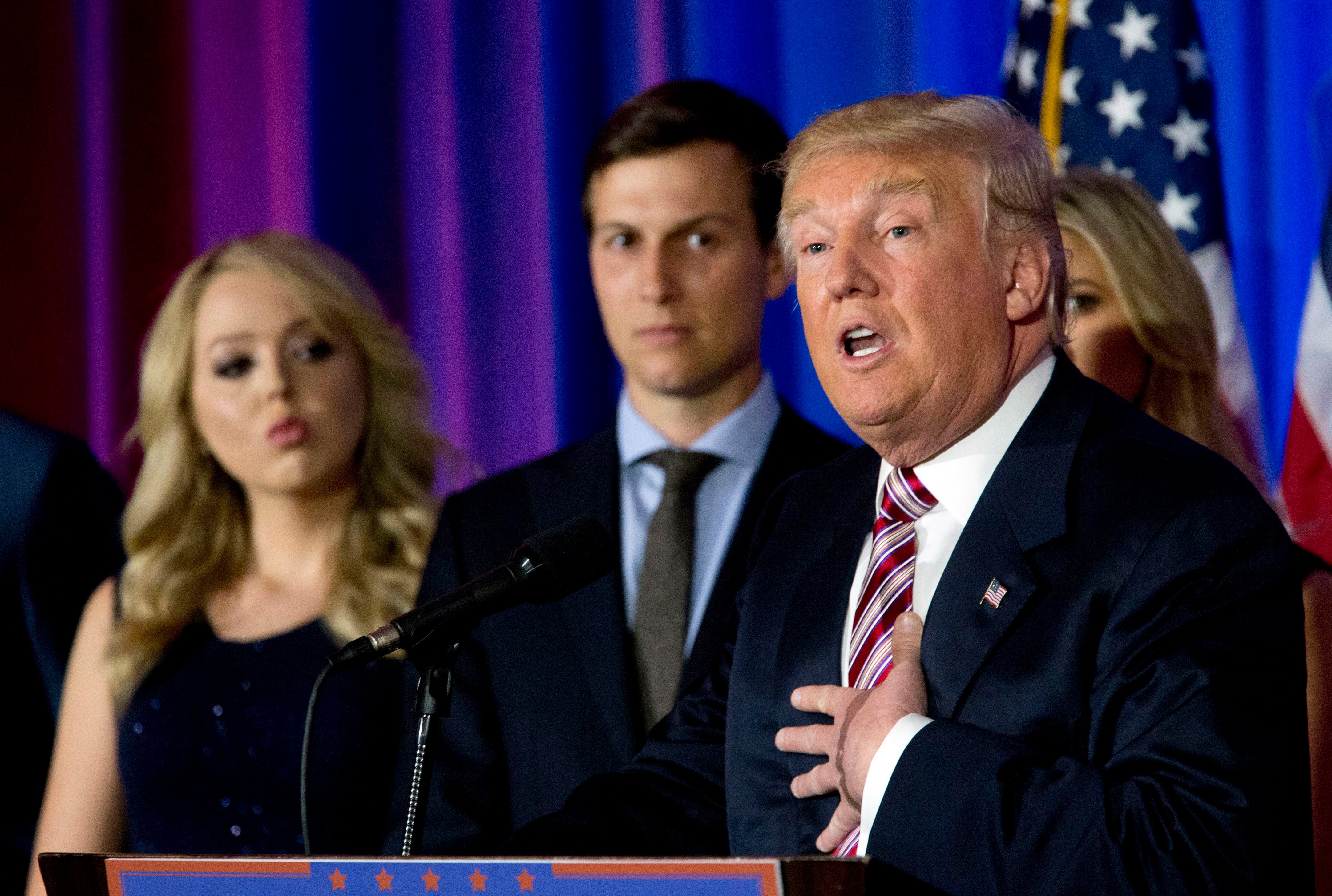 Kushner held no formal role in Trump’s campaign, and is said to be undecided on whether he’ll join the administration. But his presence during the White House visit served notice that Kushner will continue to be an unparalleled power centre in Trump’s orbit, with or without a West Wing office.

In the days since Trump’s stunning victory over Hillary Clinton, Kushner has been deeply involved in the decision-making over senior White House and Cabinet posts, according to people close to the transition team. He’s said to have been an advocate for Republican National Committee Chairman Reince Priebus becoming White House chief of staff, an appointment that was announced Sunday.

Kushner, 35, and husband of Trump’s daughter Ivanka was frequently by his father-in-law’s side during the final stretch of the bruising White House race. He spearheaded the campaign’s data operation, had a hand in some policy speeches, and was often the last person Trump spoke to before making major decisions.

“Everyone on the campaign and transition leadership team would love him to come to Washington,” Hope Hicks, Trump’s press secretary, said of Kushner. Noting Kushner’s expansive role in the campaign, Hicks added, “People are hopeful that will continue in the administration.”

Kushner, who runs the Kushner family’s real estate and construction business, has no experience in government and was not involved in politics before the 2016 election. As Kushner walked through the bustling West Wing during Trump’s visit last week, he was heard asking Obama aides, “How many of these people stay?”

Nearly the entire West Wing staff will leave at the end of Obama’s term. Filling their jobs is just one piece of the massive undertaking Trump administration before taking office on Jan. 20.

Kushner’s options for a White House job are limited given his family ties to the president, according to Richard Painter, who served as President George W. Bush’s White House ethics lawyer. Congress passed an anti-nepotism law in 1967 that prohibits the president from appointing a family member – including a son-in-law – to work in the office or agency they oversee. The measure was passed after President John F. Kennedy appointed his brother, Robert Kennedy, as attorney general.

But the law does not appear to prevent Kushner from serving as an unpaid adviser. Painter said that arrangement would allow Kushner to both advise Trump and sidestep ethics rules requiring federal employees to comply with conflict of interest laws.

“You can be an informal adviser to the president with lots of conflicts of interest,” said Painter, a Republican who supported Clinton during the campaign.

Trump is already facing questions about how he will avoid conflicts with his vast business interests. The billionaire has said he plans to fully turn his companies over to his adult children – Ivanka, as well as sons Don Jr. and Eric – but the arrangement he’s described does not appear to legally wall him off from information regarding the operations.

Kushner is directly tied to Trump’s business interests through Ivanka, who oversees domestic and global expansion of the Trump Organization’s real estate interests. And Kushner also has deep business ties of his own, serving as CEO of his family’s New York-based real estate company and publisher of the New York Observer, a Manhattan-based newspaper read largely for its high society and real estate coverage.

According to the Kushner Companies’ website, the organization completed more than $14 billion in transactions and $7 billion in acquisitions since 2007.

Kushner, who is Jewish and the grandson of Holocaust survivors, has defended Trump against charges of anti-Semitism and racism. In an opinion piece this summer, he wrote that the worst Trump’s detractors can fairly say about him “is that he has been careless in retweeting imagery that can be interpreted as offensive.”

Kushner wrote the piece after Trump tweeted an image of Clinton featuring what appeared to be the Star of David over a backdrop of dollar bills. Trump has again come under criticism this week for naming conservative media provocateur Steve Bannon as his chief strategist. Bannon’s ex-wife said in court papers that he refused to send his children to school with Jews when they were selecting a private school for their daughters to private school nearly a decade ago.

Kushner took over his family’s real estate firm at the age of 23 after his father, Charles Kushner, went to prison for tax evasion, making illegal campaign contributions and witness intimidation. Charles Kushner’s two year sentence was part of a plea deal negotiated by New Jersey Gov. Chris Christie, a prominent Trump backer who previously served as a federal prosecutor.

Kushner is said to have tolerated Christie’s role in the campaign, though he notably advocated for Trump to pick Indiana Gov. Mike Pence as his running mate over Christie – and succeeded in convincing his father-in-law to do so. On Friday, as Kushner was announced as a member of Trump’s transition team, Christie – who had been chairing the operation – was demoted.