What to expect from Barack Obama's Oval Office address on ISIS

Barack Obama has clearly failed in his goals to degrade Islamic State. Will tonight's speech dictate a new way forward? 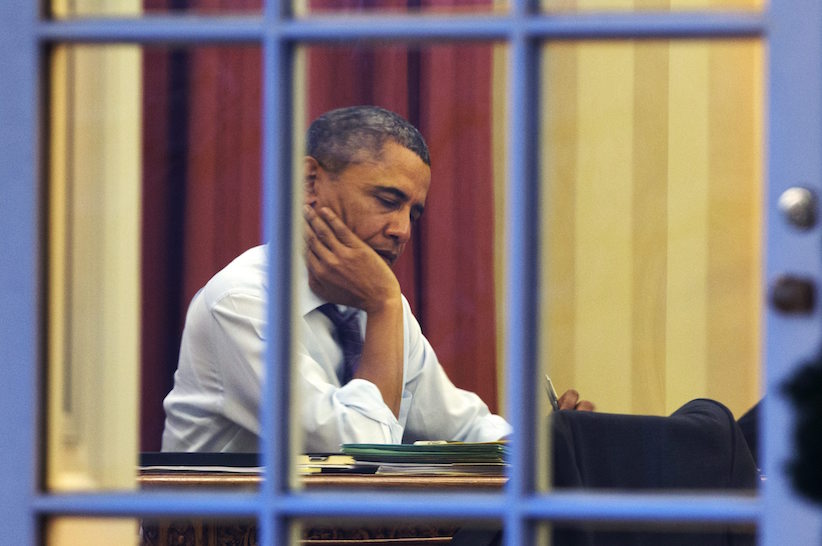 President Barack Obama works at his desk in the Oval Office of the White House in Washington, Monday, Jan. 27, 2014, ahead of Tuesday night’s State of the Union speech. (AP Photo/Jacquelyn Martin)

In January 2007, with two years remaining in his presidency, George W. Bush addressed Americans on a “new way forward” in Iraq, which was then spiralling deeper and deeper into a sectarian civil war.

The so-called surge that Bush announced that night has been described as him “doubling down” on his Iraq strategy. That’s only true in the sense that, faced with loud calls to pull American troops out of the country to save American lives, he instead deployed more of them. And by ordering those troops to protect neighbourhoods rather than hunker down in large bases, he guaranteed more of them would die.

But Bush’s surge was also an admission that American strategy thus far was failing. Something needed to change.

Tonight, as President Barack Obama addresses the nation from the Oval Office on the subject of America’s fight against the so-called Islamic State, he finds himself treading similar ground as did his predecessor.

Like Bush before him, Obama must now know that his strategy in Iraq—and now also Syria—isn’t working. It has not been a total failure, and there have in fact been notable successes. American and allied intervention helped stop the total genocide of the Yazidi religious minority in Iraq, and stopped also Islamic State’s lightning advance through northern Iraq last year.

But Obama never defined his strategy as containing Islamic State. It was to degrade and ultimately destroy the group. Clearly, in this goal the coalition has failed. And it is a consequential failure: the whole raison d’être of Islamic State is to hold territory, to have an actual state.

Islamic State grew out of al-Qaeda, the terror group run by Osama bin Laden before his death at the hands of American special forces. One of the major points of difference between al-Qaeda and Islamic State during the insurgency in Iraq was bin Laden’s belief that declaring an Islamic state too early, before the jihadists could actually run a state, would expose the emptiness of their rhetoric. Islamic State leaders, on the other hand, never wanted to wait.

Their proto-state in Iraq collapsed as a result of the surge and because Iraqi Sunnis turned against it. But now, in Syria and Iraq, they are again trying to show the world that their Islamic State is a reality. Holding territory is vital to that project. But it’s also more than symbolism. Territory, and the revenue that comes with it through taxation and trade, facilitates more ambitious terrorism. It’s easier to plot attacks against Europe, against Russia, when you have a base to work from.

Raqqa: Islamic State’s de-facto capital. Mosul: the largest city in controls. These places must be taken from it.

Obama is right to insist that local forces must do the bulk of the fighting on the ground. But the world, led by America, must help. What we’ve done so far is insufficient. Tonight, Obama needs to articulate a new way forward.