What to expect in Donald Trump's convention speech 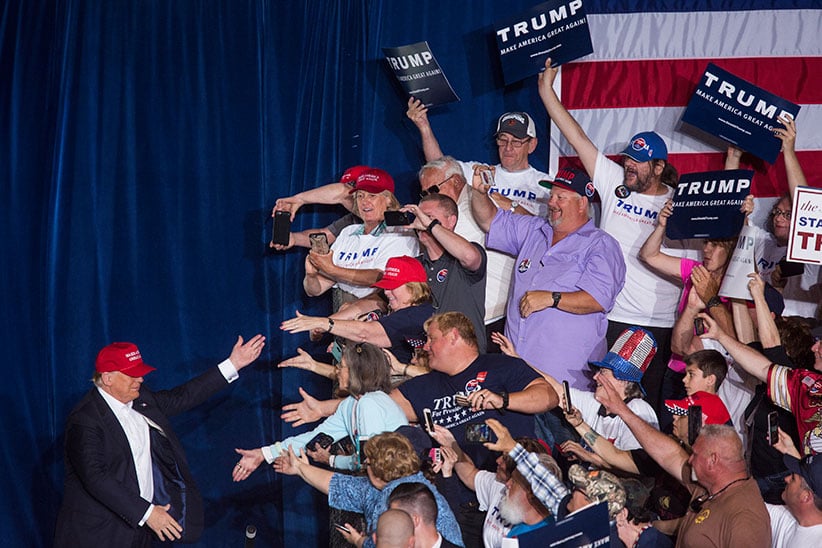 CLEVELAND — In an appeal to anxious voters, Donald Trump is pledging Thursday night that “safety will be restored” if he is elected president, using his Republican convention address to cast Democrat Hillary Clinton as part of a political class causing the nation’s troubles.

“As long as we are led by politicians who will not put ‘America First,’ then we can be assured that other nations will not treat America with respect,” Trump says, according to excerpts released ahead of his address.

Trump’s speech on the closing night of the Republican convention marks his highest-profile opportunity to unite his fractured Republican Party and quiet Americans’ concerns about his preparedness for the White House.

Trump is promising “profound relief” and “simplified” taxes for the middle class,“ an end to excessive regulation, and infrastructure projects that will create millions of jobs, according to the excerpts.

Trump takes the stage in Cleveland facing a daunting array of challenges, many of his own making. His nominating event has been consumed by a plagiarism charge, unusually harsh criticism of Clinton, and Texas Sen. Ted Cruz’s dramatic refusal to endorse the GOP nominee from the convention stage.

Overseas U.S. allies as well as voters at home will be closely watching his address, which comes the day after his suggestion that he might not defend America’s NATO partners as president.

Trump’s wife, Melania, foreshadowed it all on opening night, noting, “It would not be a Trump contest without excitement and drama.”

His team hopes to close the convention on a more traditional note, with the businessman delivering a scripted speech to the convention crowd and millions of Americans watching on television. Balloons will drop from the ceiling, and the stage will be filled with Trump family members and supporters.

Trump is to be introduced by his eldest daughter, Ivanka, one of his most polished and effective advocates.

Father and daughter took the stage together in the afternoon for an extensive walkthrough, taking turns standing at the podium and staring out into an arena that will be filled with jubilant delegates by evening.

“I love the media,” Trump said with a smile as he tested the microphone.

By night’s end, Trump’s campaign hopes voters see the real estate mogul as a candidate who, despite his unorthodox political temperament, is prepared to lead the nation.

“I think he needs to lay out some clear policy views,” Kansas Gov. Sam Brownback said. “There are still a lot of people at the convention and within the party who are not sure where he’s going to stand.”

On the eve of his address, Trump suggested a new course for U.S. foreign policy, saying he would set different conditions before coming to the defence of NATO allies. The remarks, in an interview published online Wednesday by The New York Times, deviate from decades of American doctrine and seem to reject the 67-year-old alliance’s bedrock principle of collective defence

As president, Trump said he would defend allies against Russian aggression only after first ensuring they had met their financial commitments. “If they fulfil their obligations to us, the answer is yes,” he said.

Democrats, Republicans and international partners warned of the risks of backing away from NATO obligations.

“Two world wars have shown that peace in Europe is also important for the security of the United States,” NATO Secretary-General Jens Stoltenberg said.

As Trump wrapped up his convention, Clinton was closing in on her selection of a running mate. Virginia Sen. Tim Kaine emerged as the leading contender, according to two Democrats familiar with the selection process, with an announcement expected as early as Friday.

Trump had hoped the four-day Republican convention would bolster his support among GOP leaders and win over skeptics. But that goal seemed guaranteed to go unfulfilled following Cruz’s stubborn defiance on the convention stage.

The Texas senator refused to endorse Trump during his Wednesday speech, even as delegates loudly jeered him from the convention floor. It was a surreal moment given how carefully scripted political conventions normally are, and served as a fresh reminder that Trump events rarely go by the rules.

Trump’s advisers say they saw Cruz’s remarks in advance and had not expected an endorsement. However, a Cruz aide said Thursday that one of Trump’s advisers had reached out to the senator’s team shortly before the speech in hopes of getting a last-minute commitment.

Speaking to members of the Texas delegation, Cruz held his ground. He moved no closer to an endorsement, saying only that he, too, would be watching and listening Thursday night. He insisted he would not be a “servile puppy dog,” especially after Trump’s criticism of his wife and father.

“There was a time in American history when a real man would have called the other guy out to a duel” for disparagement of his wife, Heidi, Lonegan said. “Every woman in this country should wish they had a man like that.”

Trump brushed aside the controversy, insisting Cruz was an outlier in an otherwise unified party.

“Other than a small group of people who have suffered massive and embarrassing losses, the party is VERY united. Great love in the arena!” Trump wrote on Twitter.