What to expect in Obama's last State of the Union address 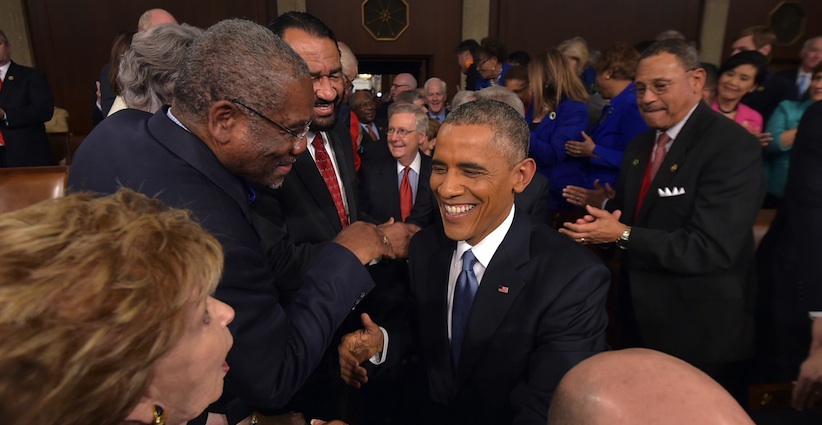 WASHINGTON — President Barack Obama’s final State of the Union address Tuesday night is his last high-profile opportunity to speak to the public before voting in the first presidential nominating contests begins on Feb. 1 with the Iowa caucuses.

After six years of pitching ambitious proposals in his annual speech to both houses of Congress, Obama plans to return to the hopeful tenor of his two presidential campaigns and give voice to themes that Democrats can embrace in their campaigns to replace him and win back control of Congress.

Obama won’t directly appeal for Americans to keep the Democratic Party in the White House for a third straight term. But he will outline domestic and international priorities that build on steps he’s taken in office, a vision certain to be more in line with Hillary Clinton and other Democrats than the Republican presidential candidates.

Some presidential candidates, including Republican Sen. Marco Rubio, will be on hand for Obama’s address. Sen. Bernie Sanders, an independent seeking the Democratic nomination, will also be present.

“He feels very optimistic about this future,” White House chief of staff Denis McDonough said, but the country Obama has led for the last seven years doesn’t always see it the same way.

Seven in 10 Americans said they see the U.S. heading in the wrong direction, according to an NBC News-Wall Street Journal poll last month. That’s a marked decline from just two months earlier, and an even steeper fall compared to the first year of Obama’s presidency, when less than half said in July 2009 that the U.S. was heading down the wrong path.

Driving that pessimism across the country, polls show, are steep concerns about national security in the era of the Islamic State group and lingering trepidation among some about the quick pace of social change in the U.S.

On the other hand, while 2015 was a volatile year for Wall Street, Americans are more confident about the economy than they were a few years ago.

Over the past year, Obama has reached a nuclear deal with Iran, re-launched diplomatic relations with Cuba, secured a global climate pact and an Asia-Pacific trade deal and negotiated a budget deal with the Republican-led Congress. Unemployment has fallen to 5 per cent, and renewed confidence in the economy led the Federal Reserve to start raising interest rates.

Obama will offer a renewed call for unfinished pieces of his agenda that already have a foothold in Congress, such as approval for his Asia-Pacific free trade pact and bipartisan efforts to overhaul the criminal justice system.

Obama is expected to keep up his appeals for broader actions to address gun violence. He’ll also try to convince a public increasingly skeptical of his foreign policy stewardship that he has a handle on the volatile Middle East and is taking steps to prevent terrorism in the United States.

The president has invited a refugee from war-torn Syria to attend the speech, a symbolic counter to Republicans proposing to block Syrians seeking asylum in the U.S. But the selection is also a reminder of Obama’s inability to end the bloodshed in Syria, where the nearly five-year civil war has spurred a refugee crisis and created a vacuum for terrorism.

Republicans selected South Carolina Gov. Nikki Haley to give the opposing party’s rebuttal. In another reminder of the fast-approaching election, Haley, whose parents are immigrants from India, is seen as a potential running mate for the eventual Republican nominee.

FILED UNDER: Barack Obama state of the union