What to expect in Trump's official opening salvo

Republican will call out rival as a failed secretary of state, out of step with Americans on trade and immigration 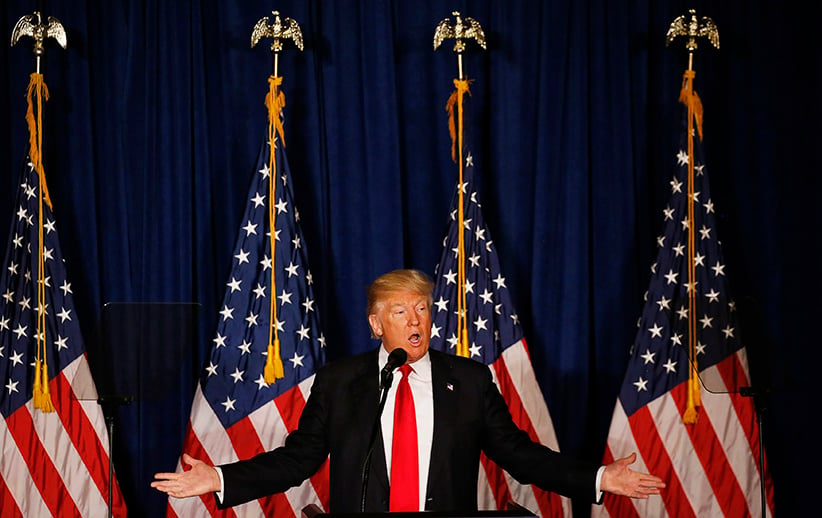 NEW YORK — Seeking to refocus his presidential campaign, Donald Trump will lambaste Democratic rival Hillary Clinton as a failed secretary of state who is out of step with Americans on trade and immigration.

Trump’s address Wednesday morning at his hotel in New York’s SoHo neighbourhood marks his official opening salvo against Clinton, the prospective Democratic presidential nominee, in the general election. It comes as Trump faces growing questions about his readiness not just for the presidency, but for the campaign he will need to run to get there.

The Trump campaign is hoping the speech can quiet those concerns and rally Republicans around their shared opposition to Clinton. The billionaire businessman plans to focus in particular on Clinton’s tenure at the State Department, arguing that her foreign policy is in part responsible for the creation of the Islamic State militant group.

“Hillary Clinton had a four-year tryout for the presidency as secretary of state,” said Stephen Miller, a Trump policy adviser. “She ran the State Department and the world went up in flames. Everything took a nosedive, except for Hillary Clinton’s bank account — which swelled to new highs.”

Trump is also expected to cite Clinton’s past support for trade deals and her willingness, along with her husband, former President Bill Clinton, to accept speaking fees and contributions to their foundation from countries with poor human rights records. However, Trump is not expected to target the former president’s personal infidelities, as he did earlier in the campaign.

Related reading: How will Donald Trump rule the world?

Clinton has been harshly critical of Trump, particularly since she wrapped up her lengthy Democratic primary battle. On Monday, she warned that the businessman would send the U.S. economy back into recession and said his “reckless” approach would hurt workers still trying to recover from the 2008 economic turbulence.

“Every day we see how reckless and careless Trump is. He’s proud of it,” Clinton said. “Well, that’s his choice. Except when he’s asking to be our president. Then it’s our choice.”

Trump had planned to deliver his address on Clinton last week, but he postponed the event because of the nightclub shootings in Orlando, Florida.

The Republican’s response to the attack was panned by many in his own party, who bristled as he took credit for “being right” about terrorism and suggested that President Barack Obama was sympathetic to militant groups. The Orlando gunman identified himself as an Islamic soldier in calls with authorities during his rampage.

On Monday, Trump fired his campaign manager, Corey Lewandowski, hours before a new fundraising report showed that the billionaire’s campaign had just $1.3 million in the bank at the start of June.

Trump allies cast Lewandowski’s firing this week as the start of a new phase for the campaign. Paul Manafort, the campaign chairman and Lewandowski’s internal rival, signalled on a conference call with aides that a rapid staffing expansion would be coming soon.

Tennessee Republican Sen. Bob Corker, who has been seen as a potential vice-presidential pick, said he was “pretty excited” to learn of the changes.

“I think that what appears to be occurring over the last 24 hours is a movement in a direction that I think could be very, very positive,” Corker said.

While Manafort, a longtime Republican operative, is believed to be in charge now, the campaign has not fully clarified who is running the operation.

“It’s not been written down anywhere, but you have to assume,” Ed Brookover, the campaign’s liaison to the Republican National Committee, said of Manafort.

As with everything involving Trump, the billionaire appears to be the only one truly in charge.