What to watch for in U.S. politics today

Viewer's Guide: All in for Indiana, dialing delegates in PA

WASHINGTON — With five more states in the rear-view mirror, presidential candidates will spend Wednesday recalculating cold, hard delegate math and plotting strategy for the contests still to come — 10 for Republicans, 16 for Democrats.

After a strong night Tuesday, front-runners Donald Trump and Hillary Clinton will try to brush off their rivals like lint on a sleeve. Bernie Sanders and Ted Cruz will look for love in Indiana. John Kasich will look further out on the political calendar to Oregon for someplace to show viability.

What to watch on Wednesday, the day after five Northeastern states had their say in the presidential race:

Pennsylvania elected 54 unpledged Republican delegates on its primary night. The prospective delegates’ names were listed on the ballot with no information about which presidential candidates they support. So it’ll take some effort to figure out who they plan to back. Watch for commitments to different candidates to start trickling out. Pennsylvania had 17 other delegates who will be bound to Trump, who won the popular vote there as part of his five-state sweep Tuesday.

As Trump tries to shift gears toward the general election, he’s eager to show he’s got a command of the issues, not just the skills of a political provocateur. His foreign policy address Wednesday in Washington will be the first in a series of policy speeches. It’s not clear how detailed he’ll be, though. Trump often complains that the Obama administration has been “too predictable” with overseas strategy, and should leave enemies guessing.

But first, he’ll be doing a victory tour on the morning TV shows. 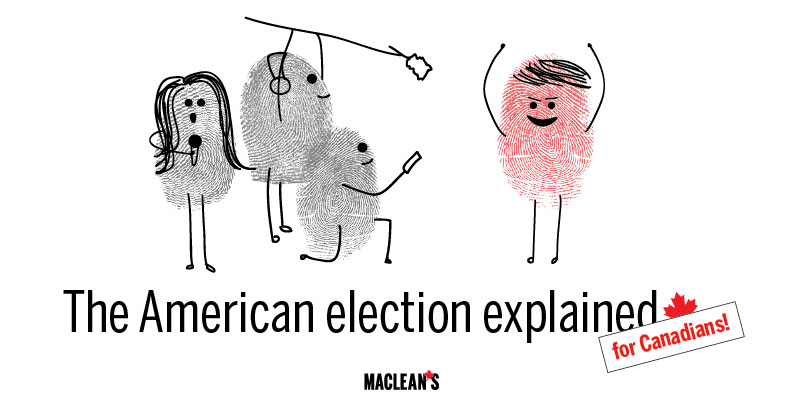 >> FOLLOW THIS LINK TO AMANDA SHENDRUK’S GUIDE TO THE U.S. PRIMARIES <<

ALL IN FOR INDIANA

Next up on the primary calendar: Indiana, which votes on May 3. The candidates all are active there except Kasich, due to his non-compete clause with Cruz. Trump’s Hoosier strategy includes an appearance in Indianapolis on Wednesday night with basketball coaching great Bobby Knight and withering criticism of United Technologies’ decision to move two of its Carrier heating and ventilating parts plants in Indiana to Mexico, eliminating 2,100 U.S. jobs. Clinton’s “make it in America” pitch touches some of the same territory, including criticism of Carrier, in a state where nearly one out of five jobs is supported by manufacturing.

Keep an eye on how Cruz and Kasich execute their stop-Trump alliance, in which Kasich agreed to clear a path for Cruz in Indiana, and Cruz will do the same for Kasich in Oregon and New Mexico. Kasich may have agreed not to campaign in Indiana, but he decided to go ahead with a fundraiser there on Tuesday, for example. And he stopped short of urging his supporters in Indiana to back Cruz.

With Kasich on the sidelines in Indiana, Cruz is investing heavily there in radio and TV advertising and he’ll spend considerable time campaigning in the state this week. He’s got a late afternoon rally Wednesday in Indianapolis.

Clinton keeps trying to leave Sanders behind but he’s been resisting taking the hint, even though his long odds of capturing the nomination deteriorated even further Tuesday night after he lost to her in Pennsylvania, Maryland, Delaware and Connecticut. The Vermont senator won Rhode Island.

Wednesday will be a time for assessing what’s next for Sanders, who’ll be campaigning in Indiana. Watch his rhetoric in coming days for hints of futility. On Tuesday, he was still vowing “to fight all the way to the Philadelphia convention.” But lately, he’s allowed himself to be drawn into speculation over what Clinton would need to do to win over his supporters in the general election.

And no wonder: After Tuesday, she’s 90 per cent of the way to the nomination.

Watch where the candidates and outside groups put their money. So far, Indiana is attracting the most investment. Anti-Trump groups Club for Growth and Our Principles PAC are spending about $2 million on TV and radio commercials there, and Cruz’s campaign and a supportive super PAC have about $1.8 million planned, according to ad tracker Kantar Media’s CMAG. Trump is in for $1 million in Indiana ads. So far, Clinton doesn’t have Hoosier ad plans, while Sanders is putting about $1.6 million into paid media there. The presidential squad has yet to broaden its plans much beyond Indiana. Sanders has about $600,000 in California ads booked, but look for far more money to show up in this pricey, delegate-rich state before its June 7 election.

AP writers Stephen Ohlemacher and Julie Bykowicz in Washington and Scott Bauer in Madison, Wisconsin, contributed to this report.