What we know about the FBI's new probe of Clinton's emails 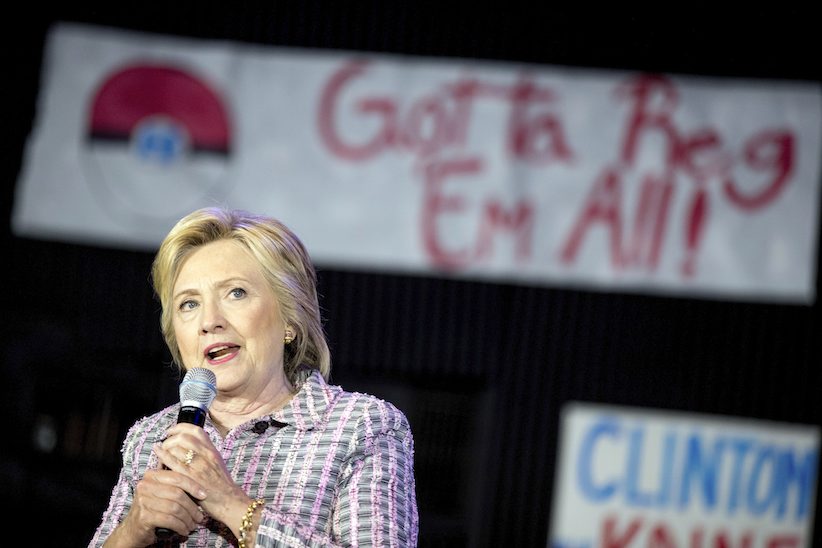 A Pokemon poster is visible behind Democratic presidential candidate Hillary Clinton as she speaks to volunteers at a Democratic party organizing event at the Neighborhood Theater in Charlotte, N.C., Monday, July 25, 2016. (AP Photo/Andrew Harnik)

WASHINGTON — Thought the furor over Hillary Clinton’s private emails was over? Think again.

The FBI dropped what amounts to a political bomb on the Clinton campaign on Friday when it announced it was investigating whether new emails involving the Democratic presidential nominee contain classified information.

The announcement was a surprise considering the FBI had closed its investigation into Clinton’s private email server in July. Turns out, though, this investigation doesn’t seem to have anything to do with Clinton’s homebrew server. A U.S. official with knowledge of the case said the new emails were uncovered recently in an unrelated sexting probe involving the estranged husband of Clinton aide Huma Abedin.

CLINTON AND HER SERVER

Shortly after Clinton announced her plans to run for president, the FBI began investigating the handling of classified material involving her server in New York while she was President Barack Obama’s secretary of state.

Clinton insisted all along that she never sent or received emails that were marked classified at the time, but some emails on her server were later deemed top secret or included confidential or sensitive information.

Most of the messages have shown how Clinton dealt with a series of foreign policy hurdles, from the Arab Spring in the Middle East to the deadly 2012 attacks in Benghazi, Libya, and efforts to curb Iran’s nuclear ambitions. It has also offered a more private window into Clinton’s daily life, showing her asking an aide to help her find Showtime’s CIA-focused drama “Homeland,” getting political intelligence from longtime allies and managing a busy schedule and flights around the globe.

Last July, the FBI said it wasn’t recommending criminal charges against Clinton. But FBI Director James Comey delivered a blistering televised statement in which he called Clinton extremely careless with her handling of national secrets and contradicted her past explanations about her emails.

In a letter to Congress on Friday, Comey said the FBI is investigating whether there is classified information in newly discovered emails. Comey says the emails surfaced during an unrelated FBI case, but didn’t say where the new emails came from or who sent them.

A U.S. official with knowledge of the case said the emails were related to a separate sexting probe involving Anthony Weiner, the estranged husband of Clinton aide Huma Abedin. The official was not authorized to discuss details publicly and spoke on condition of anonymity.

Clinton told reporters that she knew no more than they did about Comey’s revelation. “We don’t know the facts, which is why we are calling on the FBI to release all the information that it has,” she said at a brief news conference. “Even Director Comey noted that this new information might not be significant, so let’s get it out.”

As far as any connection to Abedin and Weiner, Clinton said: “You know, we’ve heard these rumours. We don’t know what to believe. And I’m sure there will be even more rumours.”

She said she could not give an example of how classification of a document was determined, and told the FBI that she relied on career professionals to handle and mark classified information.

At one point in the interview, she was presented with a 2012 email that included a “c” marking before one of the paragraphs. Though the marking was meant to connote that the material was “confidential” _ the lowest level of classification _ Clinton said she wasn’t sure.

She speculated that perhaps the “c” referenced the paragraphs being “marked in alphabetical order,” according to the FBI interview.

Either way, Clinton said she regarded the content of the email as a “condolence call” and questioned the classification level.

THE EMAILS OF SECRETARIES OF STATE PAST

According to the FBI investigation, Clinton contacted Colin Powell in January 2009 to ask about his use of a BlackBerry when he was secretary of state.

He warned her that if she used a BlackBerry to “do business,” her emails could become official public records.

“Be very careful. I got around it all by not saying much and not using systems that captured the data,” he advised Clinton, the FBI said.

Yes. Federal authorities began investigating the former New York congressman in late September after an online news outlet, DailyMail.com, published an interview with a 15-year-old North Carolina girl who said she had exchanged sexually explicit messages with him over several months.

Among other things, the girl said that during a Skype chat, Weiner had asked her to undress and touch herself.

Weiner released a statement acknowledging that he’d corresponded with the girl. In it, he apologized, saying he had “repeatedly demonstrated terrible judgment about the people I have communicated with online.”

But he also said he had “likely been the subject of a hoax” and provided an email, written by the girl to a teacher, in which she recanted her story.

Federal prosecutors in both North Carolina and New York were initially involved in the investigation, but agents in New York subsequently took the lead, according to a spokeswoman for the U.S. attorney for the Western District of North Carolina.

Weiner resigned from Congress in 2011 after it was revealed he had been exchanging sexually explicit messages with multiple women. Abedin announced their separation in August following new sexting revelations.

The FBI disclosure isn’t good news for Clinton, who had just begun to pull away from Republican rival Donald Trump in the polls after the release of a 2005 video in which Trump bragged about sexual assault.

The best scenario for Clinton is that the investigation is resolved quickly without charges. But it’s more likely the review will take some time, casting a shadow over the election.

Within minutes of Friday’s FBI announcement, Trump accused Clinton of orchestrating a “criminal scheme” before a boisterous and jubilant crowd.